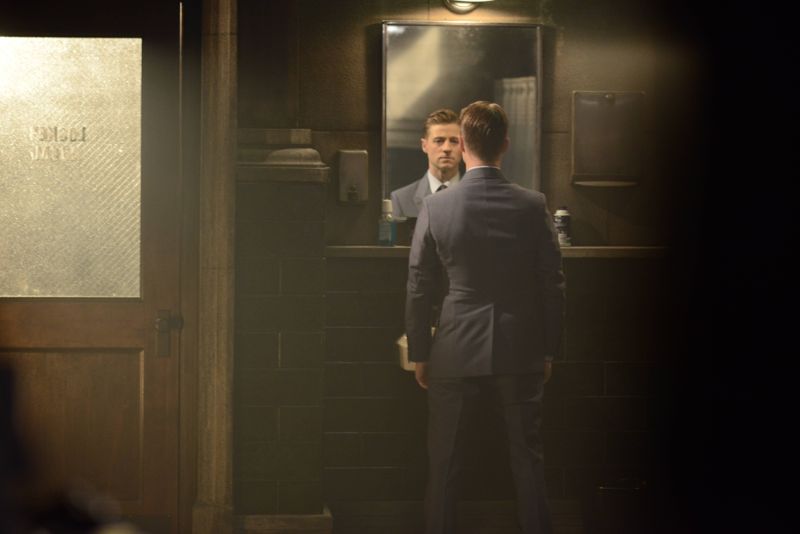 FOX’s GOTHAM is back! I just watched the first episode, “Damned If You Do…,” and I have to say, I’m really pumped about the new season. Since you may be reading this prior to the hour airing, I’m going to do my absolute best to tease without outright spoiling, but take it from me, this sophomore premiere is great!

First, when last we leave Jim Gordon (Ben McKenzie), he is reeling from a showdown with a bunch of villains and the turning of his ex, Barbara (Erin Richards), into a murderer. “Damned If You Do…” picks up about a month later, and things have only gotten worse for Gordon. Bullock (Donal Logue) is no longer with the force and Commissioner Loeb (Peter Scolari) is fully back in power. It’s not a good place for Gordon to be, and if he wants to restore a status quo or find a better life for himself, Jim is going to have to go to The Penguin (Robin Lord Taylor) for help. We all know what a bad idea that is.

GOTHAM toys a bit with the line between good and bad in its first season; Bullock, especially, straddles the gray. But never is Jim stepping so precariously as he is in the season premiere. I doubt this will be the last time. The Batman franchise has always thrived in the darkness, with heroes willing to put their morals on hold for the greater good. It makes for rich character material, and “Damned If You Do…” has some of the best in the show so far, and I’m not just talking about Jim here.

The Penguin is having pretty much the opposite life as Jim. With Fish Mooney, Sal Maroni, and Carmine Falcone gone, he has little competition for the city. Along with Butch (Drew Powell, now a series regular) and Zsasz (Anthony Carrigan), few can stand in Oswald’s way. For now.

Who rules GOTHAM is fluid, as viewers see in the freshman run. While on top at the moment, The Penguin is far from alone in the city. Nygma (Cory Michael Smith) is still facing what he has done, and Barbara isn’t exactly a saint any more. Viewers also get to meet some of the new cast members, as Theo (James Frain, True Detective, Grimm) and Tabitha Galavan (Jessica Lucas, Gracepoint, Cult) make an entrance, Jerome (Cameron Monaghan) returns, and a few newbies pop up, including one very cartoonish, very entertaining personality that is not from the comics.

GOTHAM is a city teetering on the edge. If it seems like there are more bad guys than good, that’s because there are. A lot more. Villains keep joining the scene in every episode, and Jim can only do so much. We know Batman is years away from entering the picture, even as Bruce (David Mazouz) gets ever closer to his destiny, so things will get worse before they get better. “Damned If You Do…” shows us some of that, but I think we’re merely scratching the surface of what this season will be.

Speaking of Bruce, he’s changing, too. Part of me hopes that GOTHAM will not wait for him to reach adulthood before allowing him to don the cape. It has made other changes to the traditional lore, Barbara’s descent being one of them, and I wouldn’t mind if it takes a different approach. I know Batman is on the big screen right now, but surely the character can be shared with this very different project? Mazouz has a very original take on the role, showing the awkward, teenage years that are usually glossed right over.

Other things of note in this episode include a good moment for Essen (Zabryna Guevara), a new role for Selina (Camren Bicondova), yet another chilling scene for The Penguin, and a heart-wrenching letter that perfectly sums up some of the themes of the program, so much so that I considered quoting some of the text in the review, but chose not to for fear of spoiling something really cool.

GOTHAM is a unique show that deftly balances a great many characters. It’s impressive to see something to complex and deep on the broadcast networks, and I’m pleased it’s finding an audience. In a time where superhero stuff is everyone, this show manages to find its own niche that no one else is intruding on. I can’t wait to see what happens next.