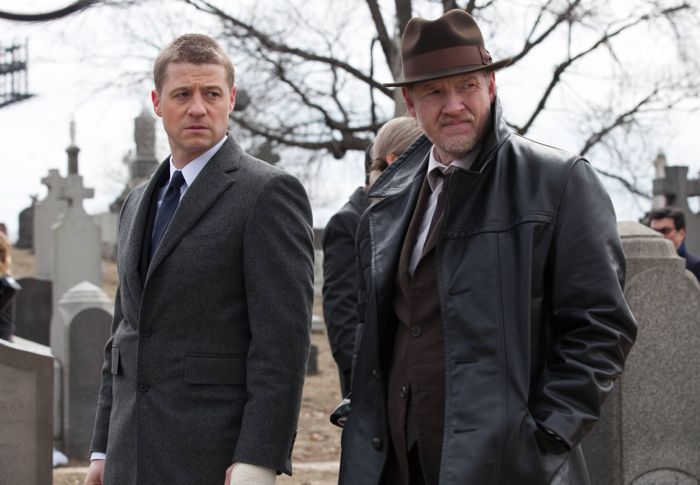 FOX’s GOTHAM is one of the most anticipated new shows of the fall. Beginning with the death of Bruce Wayne’s parents, the series follows young, noble detective James Gordon as he encounters the low-lives of the troubled titular town, including many who will become Batman’s greatest foes. What’s not to like in that premise?

DC has long been lagging behind Marvel in its quest to bring the superheroes of its comics to the screen. While Marvel began with some terrific movies, and is now branching out into pretty good shows, DC mostly successfully exists these past couple of decades on the small screen. The thing that strikes me about GOTHAM right off the bat is that it is similar in tone to other properties from this comic book company, and is at least as good as peers Smallville and Arrow.

GOTHAM is highly stylized, with lots of shadows and dark colors, which fits the character of the metropolis at the moment, a city being choked by organized crime and political corruption. If there is any doubt about how grim the show will be, it is immediately erased with the very first scene. This is appropriate, though, and matches other Batman stories before it.

Whatever else GOTHAM may be, it is a Batman story. While the main character may be Jim Gordon (Ben McKenzie, Southland), young, orphaned Bruce (David Mazouz, Touch) and his butler, Alfred (Sean Pertwee, Elementary), are main characters, as well. The fact that so many of Batman’s recognizable antagonists, such as Oswald Cobblepot, a.k.a. The Penguin (Robin Lord Taylor, Accepted), Edward Nygma, a.k.a. The Riddler (Cory Michael Smith, Dog Food), and a teenage Selina Kyla, a.k.a. Catwoman (Camren Bicondova, Battlefield America), are also among the stars makes it feel more like a part of that same franchise. Even a young Ivy Pepper (Clare Foley, Sinister), who will become Poison Ivy, puts in an appearance in the pilot. We may not get the Caped Crusader directly, but we’re definitely in his world.

That may make GOTHAM sound like it has a huge cast, and I’ve not even named half of the principals yet. One thing the series does well is balance all the various personalities and threads. Everyone seems connected somehow, and enough screen time is given to each to set them apart and help the audience define them. Obviously, some are more central than others for now, but the writers have done a terrific job crafting this large game board and the various pieces upon it.

Now, GOTHAM has non-traditional Batman elements. Gordon and his partner, the grizzled Harvey Bullock (Donal Logue, Vikings, Terriers), see the city from a perspective that our hero does not. They are on the ground, in the trenches, not lurking above it. They interact with others as normal people do, more or less, whereas young Bruce almost seems alien in his mannerisms, definitely the type of loner who will never fit into society quite right, though who can blame him after what he sees? Thus, perhaps Gordon is a little more relatable a protagonist, even though his courage and resolution not only set him apart from those around him, but make him a typical TV hero.

Besides Gordon’s familiarity, the other weaknesses GOTHAM faces are the dialogue and the main villain. The first half of the pilot has some extremely cringe-worthy lines, and when introducing each new face, the production hits the nail way too on the head in telegraphing who they will be known as. The primary bad guy Gordon runs up against, Fish Mooney (Jada Pinkett Smith, Hawthorne), is stylish, but lacks teeth, under the thumb of the more seemingly-reasonable Carmine Falcone (John Doman, The Wire). Both of these things feel very comic book-like, not in the best of ways, and keep the quality at a lower level than, say, Agents of S.H.I.E.L.D.

Still, overall, I enjoyed GOTHAM. There’s an intriguing story here, and it’s definitely a different take on the tale. I especially enjoyed the twist of who else, besides Bruce, witnesses the murders. By not tackling Batman head-on, GOTHAM avoids the comparisons to Christopher Nolan’s trilogy, which can only help it, and it’s good enough to rank one of the major networks to carry it, raising DC’s profile more than another CW venture will. Working out a few of the gripes mentioned above, this could quickly become a must-see adventure; it’s not too far from getting it right.