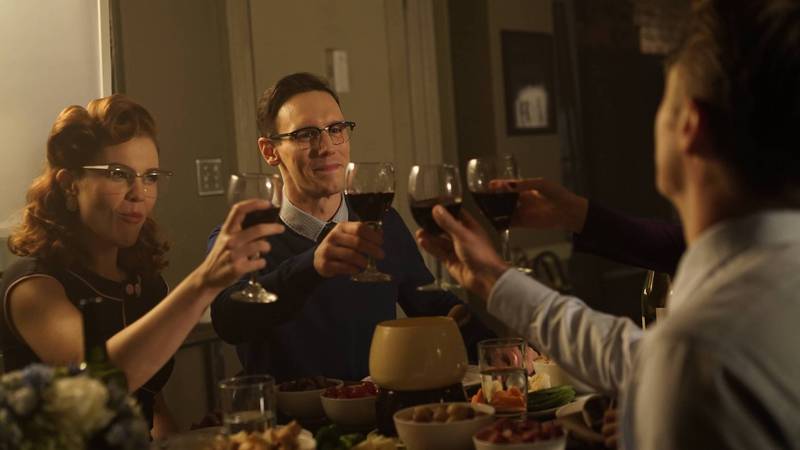 Last night’s GOTHAM revealed the “Scarification” that rocked the city nearly two centuries ago. This gives insight into the motives of the Big Bad this season, as well as provides a clue as to what his goals might be. Whether or not that will help him be stopped remains anyone’s guess, but at least not every character is still in the dark about him. Oh, and a new villain is introduced.

“Scarification” basically halts its action for a bit as Edwige (Mary Joy, Secretary) tells Penguin (Robin Lord Taylor) the tale of the Waynes and the Galavans. Apparently, a very long time ago, a Wayne badly wronged Galavan’s family, then going by a different name. Theo Galavan (James Frain) has now returned to the city to exact revenge, supported by a coming army and a shadowy cult leader (Ron Rifkin, Alias, Brothers & Sisters).

I admit, my knowledge of Batman is mostly limited to the movies, not being much of a comic book reader, so I do not know if this plot arc is based on something in the written lore or not. What I can say is that it feels off for GOTHAM. GOTHAM has dealt in a grounded here-and-now. To have such an extended flashback to such a long time ago seems weird for this particular program, and it paints an odd picture of the Waynes, who are supposedly a force for good in the current age. I’m not saying the show can’t make this story work, but it doesn’t seem to quite fit in tonally with what’s been seen so far.

Much more enjoyable is the struggle between Penguin and Theo. Penguin works very hard in the first season to defeat his enemies and rise to the top. Granted, a victory that can be achieved in less than a year isn’t all that monumental, but Penguin is on top at the start of the season after struggling to get there To have Theo come in and threaten that position now is killing Penguin, and Taylor does an excellent job of showing that desperation and frustration mixed with lunacy.

As this battle between bad guys shapes up, Captain Barnes’ (Michael Chiklis) strike force is merely squabbling with henchmen and minor foes. They encounter new baddie Firefly (Michelle Veintimilla, Not Cool), but her story is more tragic than sinister, so even aftershe kills a police officer, viewers are likely to not blame Selina (Camren Bicondova) for helping her escape.

GOTHAM doesn’t have just one kind of villain, and those shown in “Scarification” represent a wide swath of baddies. From the idiot fire-starting brothers, to Firefly, forced into service, to the Penguin, a man with a chip on his shoulder, to Theo, a well-organized gangster, to Selina, who is only sort of a villain, there are a wide variety of personalities. The way they all interact makes for very interesting television, and it’s easy to see that Barnes, Gordon (Ben McKenzie), and the rest of the force have their work cut out for them, the city allowing all of these types of people to thrive for so long.

There’s another antagonist, though, who hasn’t yet become an antagonist, and I find his story just as fascinating as those others. Edward Nygma (Cory Michael Smith) has killed, but no one knows it. Instead, he fakes a normal, happy life, even double dating with Gordon and Lee (Morena Baccarin). Obvious to anyone who regularly watches GOTHAM, his craziness is bubbling just below the surface, ready to erupt. Every scene he’s in has the potential to get insane quickly, which makes his presence very welcome.

“Scarification” is a great episode because of the Penguin’s madness and the threat of Nygma losing it. The bits with Theo and the backstory are far less interesting, and while Theo’s plan has much more to play out, I’m not really into that arc this year. He’s not as complex or unique as other villains on the show, so I hope Penguin or someone else disrupts Theo’s activities before he gets too far. Since Theo is already planning to kill Bruce Wayne (David Mazouz), and we know that can’t happen, he likely can’t go on for an entire season. The sooner he is taken out, the better.