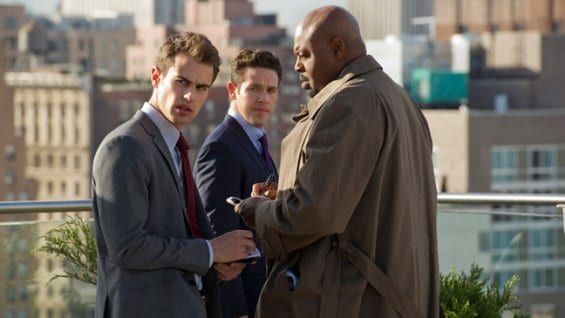 At first glance, CBS’s GOLDEN BOY, premiering this week, may seem like more than your typical cop drama. After an intense opening, the story moves seven years into the future, where we see Walter William Clark Jr. (Theo James, Bedlam) being interviewed by a reporter (Richard Kind, Luck, Spin City) about how he has become the youngest police commissioner of New York City, ever.

This is a great draw. We know that the older Walter looks quite a bit aged, pointing to a hard journey. There is regret in his tone as he talks about the price he paid to rise so quickly, so we know there will be tragedy. The fact that he is now police commissioner means that the series may move away from solving murders on the street, eventually, as we do have seven years of story to get through first.

Clark is terrific, really letting the pathos play on his face, and his American accent is pretty good. His character is an egomaniacal, overconfident jerk, so we need these future scenes to show us that he has grown, and eventually gotten beyond the arrogance of his youth. Probably. And knowing there will be movement built in is nice.

But then we get to the meat of the plot, beginning when Walter, after heroic actions, chooses to be on the homicide squad. He isn’t accepted at first because he’s young and hasn’t earned his bones. But because he really is as good as he thinks he is, he proves himself in a single hour to his co-workers.

I keep expecting Walter to screw up in the “Pilot,” as we so often see in such main characters, the drama being that they really aren’t as ready as they think they are. Walter is special, though, so GOLDEN BOY chooses the alternate tack, building him up, rather than tearing him down. Because we’ve seen where he is in seven years, we know fall will never seriously come, at least not professionally, though perhaps personally.

The problem is, if he never screws up, how will he learn? Walter’s assigned partner, Detective Don Owen (Chi McBride, Pushing Daisies, Boston Public), two years away from his retirement, is the only one who sees this, and while Don is a patient man, one wonders how long his patience with the upstart might last.

Don is set up to be a finite character. With only a couple of years left on the force, this means we are told that Don may not stick around for the long haul, even though we see his picture on future Walter’s desk.

However, because this is CBS, I strongly suspect that these hints of a great, sweeping story of a genius who does great things will be reduced to a formula. Until that day, seven years in the future, when Walter takes the big office, he will be solving a case every week. They could even stretch it longer than seven years, should the show prove popular, or make Walter the first commissioner to be out catching the bad guys himself. Don could put off retirement, sticking around for the duration, which is what I expect to see, given CBS’s track record.

Is it fair to pigeon hole what, on the face, appears to be a somewhat compelling series just because of the network it is on? I think so. Blue Bloods and Hawaii Five-0 looked like they could break the mold, but have been reduced back to the typical CBS fare. I have little confidence that GOLDEN BOY will be any different.

Part of my worry stems from the fact that the rest of the cast is pretty much what one would expect from such a series. There’s the hotshot jerk, Christian Arroyo (Kevin Alejandro, True Blood, Southland), the popular guy who Walter wants to be, even though viewers know he’ll be better off listening to Don. Christian has a softer partner in Deborah McKenzie (Bonnie Somerville, Cashmere Mafia), a pretty woman we are told is tough, but who is nice to Walter, and could even be a love interest. Another detective, Joe Diaco (Holt McCallany, Lights Out), is the likeable rogue, who will probably get in trouble because of all the rules he breaks in skimming connections. And finally, the obligatory troubled family member, Walter’s drug-addicted sister Agnes (Stella Maeve, The Runaways), who is supposed to show the human side of Walter, and provide a distraction form the casework.

If the supporting cast weren’t such a predictable lineup of personalities, I might hold out hope for GOLDEN BOY. As it is, I appreciate the “Pilot,” but will probably not become a regular watcher. The audience that will love it is those that eat up CBS’s cop shows, as this one will probably be more of the same. This is regrettable, because the cast is full of amazing actors who deserve better, but won’t get it while locked into a long-term contract.