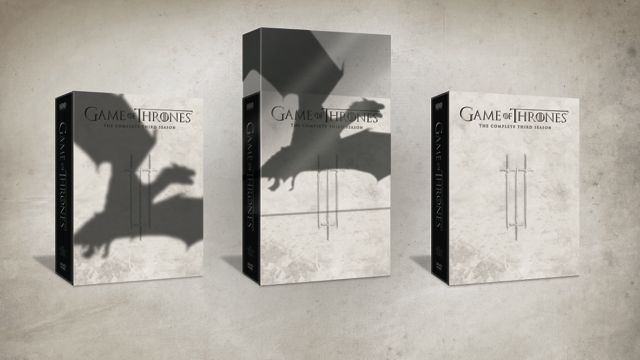 The triumphant third season of Game of Thrones is set to be released on Blu-ray, DVD and Digital Download on February 18, 2014. The box set will feature the beautiful dragon shadow image however; the fate of the exclusive Best Buy packaging is in the hands of fans. Over the past two years, the sigil box art sold at the nationwide retailer has become a favorite among fans who have taken to message boards and social platforms to speculate over which images will be featured then struggle over which one to purchase. Now they can decide!

Via a social media poll, Game of Thrones devotees will pick the Season 3 exclusive covers. There are three stylish options: a “Character Edition” featuring third season poster art of Peter Dinklage, Kit Harington and Emilia Clarke; “Season 3 New Sigils” featuring the sigils of Houses Tyrell, Tully and Stannis Baratheon who were prominent this season; or “Bring Back Your Favorite Sigil” with Houses Stark and Targaryen (Season 1) and Lannister (Season 2).

“We love that Game of Thrones fans are so passionate and vocal about our home entertainment products and the reaction to the Best Buy exclusive packaging has been fantastic for two years running,” said Meredith Vincent, VP of Marketing, HBO Home Entertainment. “This is a fun and exciting way to reward fans and give them a direct voice into what is created for the next release.”

The polling begins Monday, June 24th on the Game of Thrones and Best Buy (US) Facebook pages. Each page will host a gallery of the exclusive packaging options and fans can cast their single vote by “liking” the appropriate image. The votes will be tallied in real-time so fans can keep track of which option is gaining the most support. Voting ends on Sunday, July 21st and the winning art will be revealed on both Facebook pages, and available for pre-order, on Friday, August 2nd.

The Best Buy exclusive packaging will be available in all retail locations nationwide as well as Future Shop in Canada and additional international stores to be confirmed at a later date. Information on the BD/DVD bonus features will be announced by the end of year.