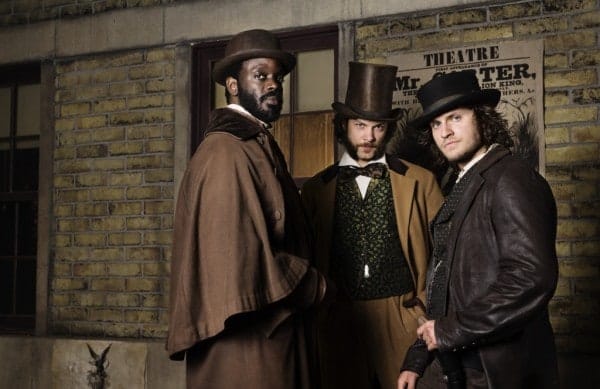 BBC America’s COPPER begins its second season this week with “Home, Sweet Home,” and it’s quickly clear, despite the pleasing episode title, that things are anything but serene in Five Points. Sex, drug use, waiting for execution, murder, and serious maiming are just a few of the things that occur in the first few scenes of the season. Which indicates that we’re in for another, even rockier ride than last year.

The villain causing much of the trouble is Buzzie Burke (Noah Danby, Defiance). Buzzie has been under the protection of community leaders, but now is causing too much trouble to be ignored. Detective Kevin Corcoran (Tom Weston-Jones) is reluctant to go after him in an official capacity, having been rebuffed in the past for doing so, but considering that Buzzie chooses Eva (Franka Potente) to hurt, someone Kevin is protective of, Kevin has no problem with taking Buzzie down.

What Buzzie does to Eva is graphic and disturbing, and when combined with his later actions in “Home, Sweet Home,” it seems we are dealing with a ruthless psychopath. The fact that he’s been allowed to live and do whatever he wants this long is unacceptable. He is a sign of a larger symptom, the semi-lawlessness of the neighborhood, and that has got to change.

Enter General Donovan (Donal Logue, Terriers). Donovan has been tasked with cleaning up the police department in the area and restoring order. His methods are confusing, beating an officer one moment, then offering him words of encouragement the next. He seems determined to make sure his men are doing their jobs and refrains from consuming much alcohol, but he is also not a paper pusher or pious or weak man. He has fortitude and determination, but his moral code remains somewhat shaded.

This might be just what Five Points needs. Donovan is encouraging of Corcoran, and misses being a copper himself, so he’s sympathetic to the job. Yet, his elbow rubbing with the high society folk make him somewhat suspicious. Sure, Corcoran is friends with Robert Morehouse (Kyle Schmid), and that doesn’t reflect poorly on him, but there’s something about the way Donovan is actually part of that world that sits weirdly. However, we also see Donovan generously help out a working man, so perhaps he is exactly what he purports to be.

Unfortunately for Morehouse, though, he has someone under his roof that is definitely not on the up and up. Morehouse’s fiancé, Elizabeth Haverford (Anastasia Griffith), may give him great and copious love making sessions, but she is much less forthcoming about her feelings and actions. She is nervously awaiting the axe, as the man she conspired with in the burnings in New York is captured in Detroit, and she fears that her part will be exposed. She likely hopes the wedding takes place first, so Morehouse will be motivated to protect, rather than shun, her.

Francis Maguire (Kevin Ryan) awaits a more literal execution, sitting in jail, expecting to be sentenced to death. Maguire is a main character in season one, and he does some things that make viewers root for him before his downfall. Yet, Kevin’s feelings of betrayal at the hands of Maguire are also justified, so a legal punishment isn’t unwarranted. It’s hard to say what exactly Maguire’s plot will be this year, but given the end of “Home, Sweet Home,” he definitely won’t just be sitting in jail, and we may have reason to support him once more, as O’Brien (Dylan Taylor) covertly does.

I do think Eva is involved with what Maguire does while in prison. She is a very tough cookie, and not one to sit idly by and wait for others to take care of the threats against her. Knowing her life and her business are in jeopardy, she takes steps to secure both. With Buzzie out of the way, Eva’s operation grows, but I really think she is more concerned with self-preservation than becoming a major entrepreneur. Unlike most women of the time, she has the ability to handle herself in a way many men would not be able to. Amazing is an absolutely appropriate word to describe her character and strength.

Although Eva is independent, she doesn’t need to be alone. Corcoran may have cut off their intimate relations now that his wife, Ellen (Alex Paxton-Beesley), is found alive and returned home, but Corcoran isn’t happy with Ellen. Eva is a much better match, her passion and intelligence matching Corcoran’s own, whole Ellen is a somewhat pathetic woman. Corcoran can do better.

Elsewhere, Dr. Freeman (Ato Essandoh) is asked to take over a medical practice in the Five Points. He is reticent, having moved to the country for the sake of his wife, Sara (Tess Thompson), who is just about the polar opposite of Eva. The patients need Freeman, and while it may be inconvenient for him to commute, and though he doesn’t reveal his decision this week, it’s likely he will accept the job, out of obligation to his profession, if for no other reason. It’s in keeping with the nobility Freeman has.

Despite Sara’s weaknesses, she has shown the gumption to survive and make it through ordeals. She still is haunted by the sight of her brothers’ deaths during the riots, but she agrees to go to work in the city, for Elizabeth, no less. And it looks like she may be good at it, leading to more than a temporary assignment. This provides a possible way for the Freemans to return to the old neighborhood, coming “Home, Sweet Home,” if you will.

I’ll admit, I liked season one, but didn’t love it. However, the season two premiere of COPPER is an exciting story providing movement and intrigue for a number of characters, and introducing at least one new one I’m eager to learn more about. It presents a totally different world than the modern one, with vastly diverging values and codes. The show does have heroes and villains, but sometimes both labels describe the same person, which is interesting. As such, I look forward to what may develop next.