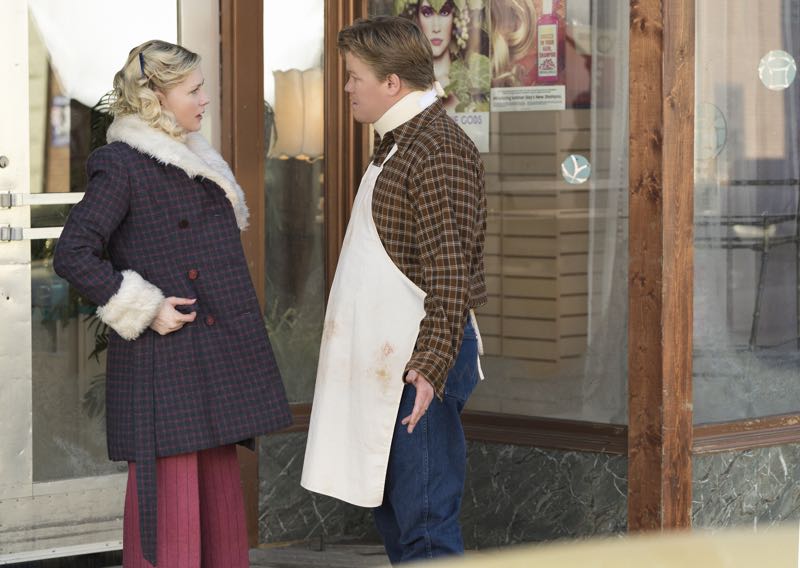 FX will air the acclaimed second installment of FX’s limited series Fargo in its entirety on Saturday, June 4, it was announced by Chuck Saftler, President of Program Strategy and COO, FX Networks. The marathon featuring all 10 episodes in consecutive order will run from 10 AM ET/PT to 8 PM ET/PT and be presented with limited commercial interruption.

Fargo’s second chapter travels back to 1979 in Sioux Falls, South Dakota and Luverne, Minnesota. “Lou Solverson” (Patrick Wilson), a young State Trooper recently back from Vietnam, investigates a case involving a local crime gang, a major Mob syndicate and a small town beautician “Peggy Blumquist” (Kirsten Dunst) and her husband “Ed” (Jesse Plemons), the local butcher’s assistant. Helping Lou piece things together is his father-in-law, “Sheriff Hank Larsson” (Ted Danson). The investigation will lead them to a colorful cast of characters that includes “Karl Weathers” (Nick Offerman), the town lawyer of Luverne, Minnesota. A Korean War vet, Karl is a flowery drunk blessed with the gift of gab and the eloquence of a true con artist. Three-time Emmy® winner Brad Garrett will play “Joe Bulo,” the front man for the northern expansion of a Kansas City crime syndicate. The new face of corporate crime, Joe’s bringing a Walmart mentality to small town America. His number two is “Mike Milligan” (Bokeem Woodbine). Part enforcer, part detective, Mike is always smiling – but the joke is usually on you. Bulo and his crew have their sights set on the Gerhardt crime family in Fargo, currently led by matriarch “Floyd Gerhardt” (Jean Smart). With her husband at death’s door, Floyd takes over the family business, frustrating her eldest son, “Dodd Gerhardt” (Jeffrey Donovan). An impatient hothead with a cruel streak to match his ambitions, Dodd can’t wait for both his parents to die so he can take over and expand their business from kingdom to empire. “Bear Gerhardt” (Angus Sampson) is the middle son, an intimidatingly large man who, although inarticulate, is the most decent of his clan. “Rye Gerhardt” (Kieran Culkin), the youngest of the Gerhardt family, views himself as a big shot, but in reality he’s just a small dog who barks big.

10 AM – Episode 1 – “Waiting for Dutch” – In 1979, an unexpected turn of events at a diner disrupts the lives of the citizens in a small Minnesota town. Written by Noah Hawley; directed by Michael Uppendahl / Randall Einhorn.

11 AM – Episode 2 – “Before The Law” – The Gerhardts get a surprising offer, and two unlikely murderers do their best to clean up their mess. Written by Noah Hawley; directed by Noah Hawley.

12 PM – Episode 3 – “The Myth of Sisyphus” – The Gerhardts’ search for Rye intensifies, Lou takes a trip to Fargo, and Peggy overhears a new theory about the Waffle Hut shooter. Written by Bob DeLaurentis; directed by Michael Uppendahl.

2 PM – Episode 5 – “The Gift of the Magi” – Floyd takes action, and Charlie tries to prove himself. Peggy and Ed disagree about what to do next, while Lou finds himself sidelined during Ronald Reagan’s campaign tour. Written by Matt Wolpert & Ben Nedivi; directed by Jeffrey Reiner.

3 PM – Episode 6 – “Rhinoceros” – Lou and Hank try to prevent an altercation, Peggy and Ed defend their choices and the Gerhardt clan attempts to get back one of their own. Written by Noah Hawley; directed by Jeffrey Reiner.

4 PM – Episode 7 – “Did you do this? No, you did it!” – Lou and Hank investigate in Fargo, The King of Breakfast visits Betsy and Molly, Floyd is summoned away and Bear questions a family member’s loyalty. Written by Noah Hawley and Matt Wolpert & Ben Nedivi; directed by Keith Gordon.

6 PM – Episode 9 – “The Castle” – Peggy and Ed agree to follow through with their plan at the Motor Motel, Lou faces jurisdictional politics and Hanzee reports back to the Gerhardts. Written by Noah Hawley and Steve Blackman; directed by Adam Arkin.

7 PM – Episode 10 – “Palindrome” – Peggy and Ed make a run for it. Written by Noah Hawley; directed by Adam Arkin.