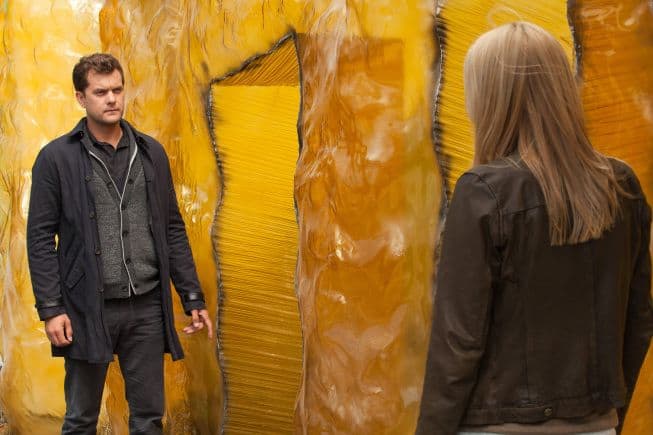 FOX’s FRINGE has tackled several universes and timelines, with characters existing, then not existing, being killed off, and then being alive again. For the fifth and final season, the series faces yet another reboot, this time moving events more than twenty years into the future.

The season premiere, “Transilience Thought Unifier Model-11,” continues the plot begun in last season’s episode “Letters of Transit.” Peter (Joshua Jackson), Walter (John Noble), and Astrid (Jasika Nicole) have been freed from their self-imposed amber prison by Peter’s daughter, Etta (Georgina Haig). Walter tells them that they must find Olivia (Anna Torv), as she has an important device that would allow Wallter to defeat the Observers, who have taken over the world.

Believe it or not, it isn’t that hard to find Olivia, and Etta is soon reunited with her mother. But in the process, Walter is taken prisoner by the Observers, and his brain is damaged severely. Will he still be able to save everyone? And why has the music died? Are songs what Walter needs to figure things out?

The futuristic world of FRINGE owes allegiance to many sci-fi stories. While it is a new, original creation, there are lots of illusions its geeky fans will recognize. The Observers say “Resistance is futile” like Star Trek’s Borg. Videos are played back on flickering blue projects, a la Star Wars. Banners and posters of an Observer hang from buildings just as they did for Big Brother in 1984. Why so many borrowed ideas? Is this purposeful, a clue meant to provide insight into events? Or have the Easter eggs included for the nerds just grown too obvious?

There are so many unanswered questions in “Transilience Thought Unifier Model-11.”  Even before the team was put in the amber, several years had passed since the previous episode. How did the Observers conquer mankind? Why was William Bell (Leonard Nimoy) in the amber with the Fringe team? When did September (Michael Cerveris) implant Walter’s brain with the key to stopping his people? Why have the Observers taken over in the first place, when previously they had only watched?

The episode itself is kind of tantalizing because it does fill in a couple of the gaps, such how Olivia and Peter came to break, and why Olivia isn’t with the rest of the team. But not a lot else happens. A plan is revealed, only to be yanked away again. Olivia is found way too easy, and the Observer’s base is infiltrated just as smoothly. Overall, it is not a strong return.

Even more regrettable is what is missing. Lincoln Lee (Seth Gabel) has been dropped from the cast, and there is no mention or glimpse of the other universe. This is an important element to FRINGE, having spent years developing that place and Lincoln’s character. To have them just disappear is disconcerting, and hopefully both will be revisited before the series makes its final bow. In fact, given the unsettling time and space jump, maybe some of these final episodes will be set back in the present day?

Broyles (Lance Reddick) and Nina (Blair Brown) are also missing. Does this allude to a shrunken universe in season five? Will the show now just concentrate on Peter, Olivia, Walter, Astrid, and Etta? These are all wonderful characters with fantastic stories, and the Bishop family (including Astrid, who is practically a member) is the heart of FRINGE. But that doesn’t mean that fans are ready to give up the rest of what is familiar about the show.

Which means that “Transilience Thought Unifier Model-11” is disappointing. A large part of me trusts the people who make FRINGE to do right. After all, for four seasons they have not let us down, crafting this brilliant, original series. But the first installment of season five is less than promising, taking away many of the trappings fans have grown comfortable with, and revealing a whole different kind of adventure. Should the series be continuing a couple more years, this would be cool. Since there are a scant dozen episode left, it’s worrying to be taken so far off the trail FRINGE was previously on, with no signs pointing the way back.