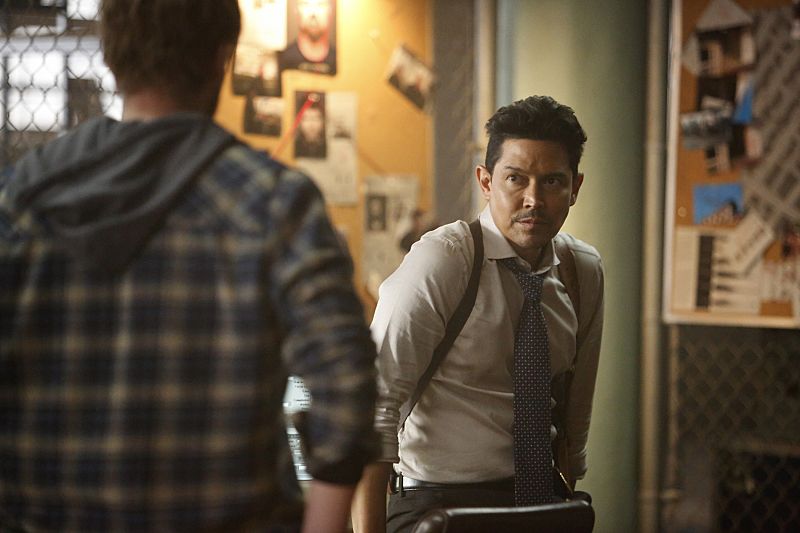 The CW’s new drama series FREQUENCY delves deep into what happens when you change just one small thing in the past and how it can have a dramatic effect on the future.  The “butterfly effect” can be devastating if one is not prepared to make significant sacrifices.  Starring Peyton List and Riley Smith as the father-daughter duo who find a way to communicate through a ham radio across time, FREQUENCY is a tale of family and justice.  It’s a daughter wanting to connect with the man she never knew as her dad because he died too soon, and it is a quest for justice in tacking a killer who has eluded the police across the decades.  Trying to get a few answers, I spoke with co-star Anthony Ruivivar at this past summer’s Television Critics Association tour about the key part his character plays in FREQUENCY.

Tell me a little bit about your character Deputy Chief Stan Morano.  From the first episode, it looks like your character might be a villain or a bit of a bad guy.  What is your sense of who he is?
ANTHONY:    Right.  I think it’s on edge for sure.  And to be honest like we’re only like a couple of episodes in, so I don’t have a ton of information on where he’s going with it.  But suffice to say that I think he’s going to be an exciting character to watch on the show.  I think you’re going to lean forward every time he’s on screen. To me, he’s just like Harvey Keitel in “Cop Land” or Denzel Washington in “Training Day.”  It’s like you’re not sure if you want to root for him or not, or what side of the fence he lies.  So it’ll be exciting to see as the series unfolds.  Plus it’s FREQUENCY, so you’re dealing with multiple timelines.  Things can change quickly.

So what you might have seen in the first episode may not hold true anymore when you get back to the second timeline.
ANTHONY:    Right.  Yeah the second season could be something completely different.  You know it’s fun that way.

Have they kind of given you an outline of where you might go this season?  Or are you just waiting to see how it plays out for the surprise?
ANTHONY:    We have a general idea, but nothing really specific.  So every time we get a script it’s like Christmas Day.  We’re like tearing it open.  It’s also well written so I really give them my trust.

What do you like about working on FREQUENCY so far?
ANTHONY:    I love that, at the heart of it, it’s really about the human condition — and it’s that wonderful sci-fi.  I did a film called “The Adjustment Bureau” and it plays with sci-fi in such a wonderfully smart way that doesn’t rely on lasers or aliens or special effects or things blowing up.  It’s really kind of psychological at heart and head-y.  So the different timelines, I mean we’re not even sending people back in further time.  It’s only information.

FREQUENCY is not even about time-travel.  It’s literally two different timelines being manipulated by each other.
ANTHONY:    Exactly.  And the idea that they’re solving crimes — they’re solving cases, they’re solving conundrums — across a 20 year divide is pretty wild.  I don’t think anyone’s ever done that before.

What was the appeal for you?  Just the fact that it has so many layers in it?
ANTHONY:    I really liked how mysterious the character was, and I like Jeremy Carver and Jen Gwartz. They’re amazing producers.  It is really exciting because the movie is such a wonderful film with Jim Caviezel and Dennis Quaid.  So it was exciting — like how are we going to make this into a series.  But just like the film, the series has that same heart.  It gets you.

You really feel an emotional connection to it even in both universes, so to speak.  It is intriguing that the connection was also done unintentionally.  They didn’t intend to do it, it just happened.  Then you have the “butterfly effect” happening as you change one thing.  So with that one connection, so much can change.
ANTHONY:    Right.  “Be careful what you wish for.”  Do you really want to have that last conversation with your dad or do you really want to change or alter the past?

Do you find it kind of messes with your head a little bit as you are playing your character on the show?
ANTHONY:    It does.  I tell you, it’s really hard.  Like you should see Peyton’s notebook for this script – she’s got it all layered. It’s so hard to keep track of the timelines — with “okay, in this reality this is what the givens are and now it’s different.”  So it’s really hard to keep track of.

There is a kind of interesting dynamics between his character Frank and your character as his boss.  Watching it, one is not sure if they were supposed to be friends or not.  What is the kind of relationship they have?
ANTHONY:    We want to “peel that onion” back more throughout the season.  It’s never cut-and-dry.  It’s never black-and-white, which I love.  That’s another great thing about the show — they don’t just hand you everything on a silver platter.  It’s like you’ve got to work for it.  It’s a thinking show.  We’re excited for it.  You’ll just have to see how it goes.