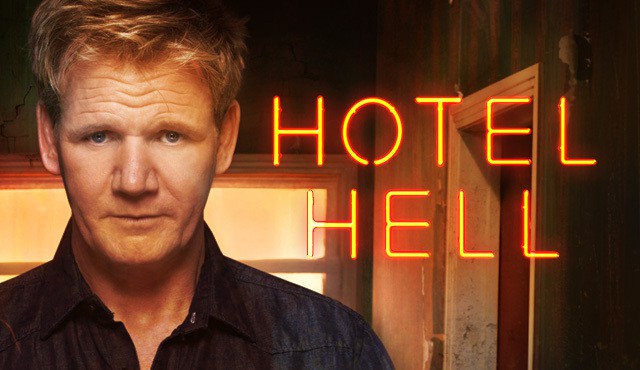 FOX has ordered a second season of HOTEL HELL, the hit Gordon Ramsay series in which the award-winning chef and hospitality expert travels the country to fix horrid hotels, awful inns and just plain bad bed and breakfasts.

“The response to HOTEL HELL has been truly extraordinary, and we’re really excited to have the opportunity to turn around many more hotels in dire need of intervention,” said Gordon Ramsay.

“With HOTEL HELL, Gordon has proved once again that he’s one of the most successful and appealing personalities on television,” said Mike Darnell, President of Alternative Entertainment, Fox Broadcasting Company. “He delivered an amazing new show for us this summer that fans immediately embraced, and I can’t wait for him to get started on an even more exciting Season Two.”

In HOTEL HELL, Ramsay endures hotels at their worst – from filthy bedrooms and mold-ridden bathrooms to dreadful room service and incompetent management – all so unsuspecting guests don’t have to. After he uncovers all the dirty secrets, Ramsay puts the hotel owners and employees to work as he attempts to turn around these failing establishments. With reputations on the line, one thing is certain: if they can’t meet and maintain Ramsay’s five-star standards, they will never check out of HOTEL HELL.

Tune in to the two-hour season finale airing Monday, Sept. 3 (8:00-10:00 PM ET/PT) on FOX, when Ramsay checks into two inns struggling to stay afloat. Established in the 1880s, the River Rock Inn in Milford, PA is falling apart. It’s in desperate need of a cleaning, there are dead bugs everywhere and Ramsay discovers a disgusting galaxy of stains on one particular bedspread that sends him through the roof. Then, Ramsay checks into the Roosevelt Inn, a converted 16-bedroom schoolhouse in Coeur D’Alene, ID, where the owner is more interested in dressing up like Sherlock Holmes for murder mystery nights than he is in updating the hotel’s musty décor. Find out if Ramsay’s efforts are enough to save these inns, in the special two-hour “River Rock Inn/Roosevelt Inn” season finale episode of HOTEL HELL.

If you are an owner who would like to apply for HOTEL HELL, or know of a hotel in serious need of Gordon Ramsay’s help, please email: hotelhell@optpinc.com.