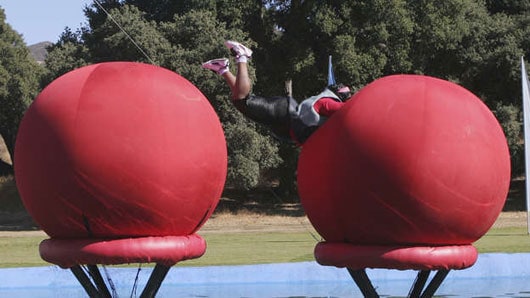 “Wipeout,” ABC’s popular reality series, has been picked up for a sixth season. The next installment of the hit game show will include its 100th episode milestone, set to air in 2012-13. Twenty-four adventurous players of all shapes and sizes will compete in the world’s largest extreme obstacle course designed to showcase the best body flips, biggest splashes and amazing wipeouts that the entire family can enjoy. Next season will also bring back Jill Wagner as co-host. “Wipeout” recently won the 2012 Nickelodeon Kids’ Choice Award in the Favorite Reality Show category. The series will be hosted by John Anderson (ESPN’s “SportsCenter”), John Henson (E! Entertainment’s “Talk Soup”) and co-hosted by Jill Wagner (MTV’s “Teen Wolf”).

“I’m thrilled that we will hit a major milestone in our sixth season, our 100th episode. We’ll be celebrating all season long with brand new over-the-top courses and the return of Jill Wagner to the ‘Wipeout’ family,” said Matt Kunitz, creator and executive producer.

Upon its return, viewers can expect all1new courses, with bigger and better obstacles than ever before. The ever popular Big Balls will be back, and the challenging Qualifier will include many twists and surprises for contestants vying to earn a spot in the completely redesigned Wipeout Zones, as players try their best to bring home the $50,000 grand prize.

ABC’s “Wipeout” emerged as the 2011-12 season’s No. 1 show overall for Family Co-Viewing on the major networks (Adults 18-49 watching with Teens and Kids).