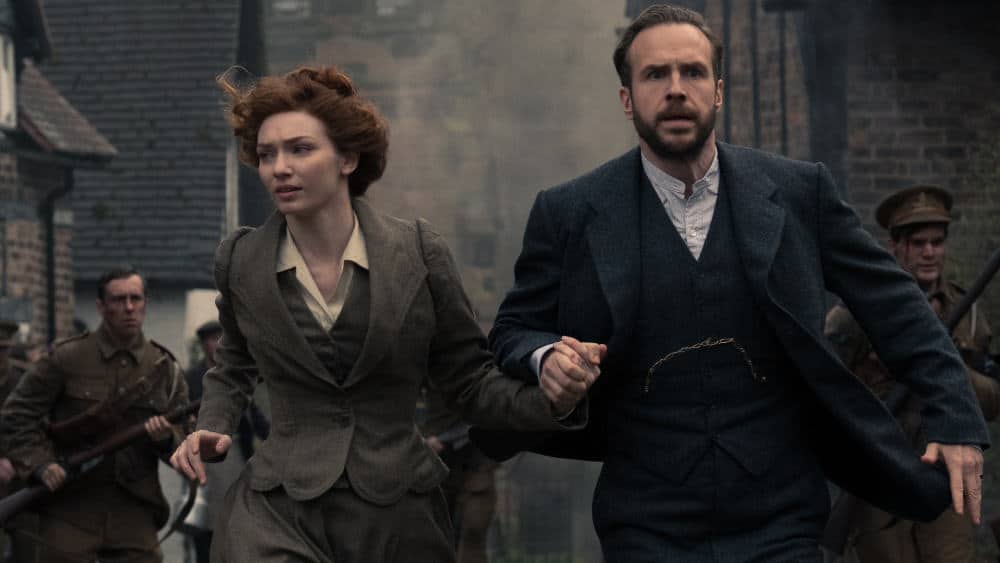 Filming has begun in Liverpool on The War of the Worlds, a major adaptation by Peter Harness (Wallander, Jonathan Strange and Mr Norrell) of H.G. Wells’ classic sci-fi title. This major new three-part drama is produced by Mammoth Screen for BBC One.

Eleanor Tomlinson (Poldark, Loving Vincent) and Rafe Spall (Jurassic World: Fallen Kingdom, The Big Short) lead the cast alongside Robert Carlyle (T2:Trainspotting, Once Upon A Time) and Rupert Graves (Swimming with Men, Sherlock) in the first British television adaptation of H.G. Wells’ classic novel. The War of the Worlds will be directed by award-winning director Craig Viveiros (And Then There Were None, Rillington Place) and produced by Betsan Morris Evans, (NW, The City in The City).

Set in Edwardian England, this new adaptation of H.G. Wells’ seminal tale – the first alien invasion story in literature – follows George (played by Rafe Spall) and his partner Amy (Eleanor Tomlinson) as they attempt to defy society and start a life together. Rupert Graves is Frederick, George’s elder brother, and Robert Carlyle plays Ogilvy, an astronomer and scientist. The War of the Worlds tells their story as they face the escalating terror of an alien invasion, fighting for their lives against an enemy beyond their comprehension.

Eleanor Tomlinson says: “I’m delighted to be taking on the Martians with Rafe Spall in Mammoth Screen’s adaptation of The War Of The Worlds. I’ve been a fan of Craig Viveiros’ work for a while, so creating this world with him at the helm is very exciting.”

Rafe Spall says: “I am thrilled to be a part of bringing this much loved story to the small screen. I couldn’t be in better company with Craig Viveiros, Peter Harness, all at Mammoth Screen and of course, the very talented Eleanor Tomlinson.”

Damien Timmer, Executive Producer of Mammoth Screen, says: “Here we are, making the original and best alien invasion story for the BBC One audience – it doesn’t get much better than this! With a stellar cast and some very scary Martians up our sleeve we look forward to terrifying large sections of the audience soon!’

Craig Viveiros, Director, says: “H.G. Wells’ seminal novel has been adapted for the screen many times but it’s always had a contemporary (and American) setting, this is the first version to be set in London and the Home Counties during the Edwardian period. Peter’s scripts manage to honour the source material with great skill, but we aim to provide a thoroughly modern thrill ride for the audience, delivering an alien invasion story that will shock and awe audiences across the globe.”

Peter Harness says: “The version of The War of the Worlds that I wanted to make is one that’s faithful to the tone and the spirit of the book, but which also feels contemporary, surprising and full of shocks: a collision of sci-fi, period drama and horror. There is nothing cosy or predictable about Wells’ novel, and that’s what I want to capture in the show. We have an incredible cast, a brilliant director and a wonderful crew – and I can’t wait for them to explode the terrifying story of the first alien invasion on to our screens.”

The War of the Worlds is a Mammoth Screen drama for BBC One. The executive producers are Damien Timmer, Preethi Mavahalli, Peter Harness, Craig Viveiros for Mammoth Screen and Tommy Bulfin for the BBC.

ITV Studios Global Entertainment will be responsible for international distribution.