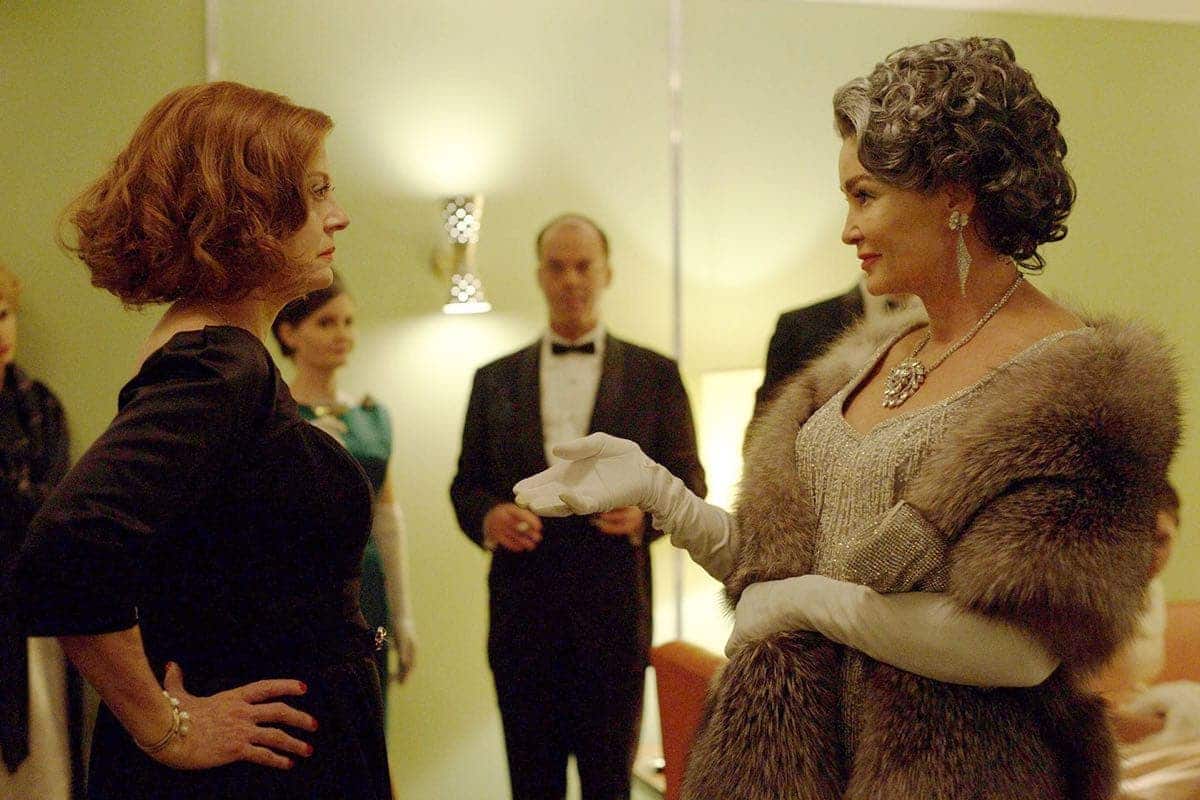 Ryan Murphy, who has had great success with the anthology series format on FX in American Horror Story and American Crime Story, brings his next show to television tonight in FEUD. The first season is subtitled BETTE AND JOAN, and covers the film the two legendary actresses made together, What Ever Happened To Baby Jane? As you might expect, FEUD is excellent.

Jessica Lange (Big Fish, Horace and Pete) has been Murphy’s muse before, and as a grand lady herself, it makes sense for her to play Joan Crawford, the catalyst that gets the plot moving. Once a big Hollywood star, now a widow who hasn’t worked in awhile, Joan is disappointed by the dearth of strong roles for women of a certain age and sets out to force her own picture through. Latching onto the book What Ever Happened To Baby Jane, she recruits director Robert Aldrich (Alfred Molina, The Normal Heart, Spider-Man 2) and her long-time rival, Bette Davis (Susan Sarandon, Thelma & Louise, The Lovely Bones), to help with her comeback. That’s where this story begins.

I cannot emphasize enough the quality of acting in FEUD. Alongside Molina, we get Judy Davis (Maria Antoinette), Jackie Hoffman (Birdman), Stanley Tucci (Spotlight), Alison Wright (The Americans), Kathy Bates (American Horror Story), Catherine Zeta-Jones (Chicago), Reed Diamond (Underground), Kiernan Shipka (Mad Men), and more. Each delivers a quality, layered performance that greatly enhances the world of the series and puts the audience right into this time and place, both familiar and interesting.

None of these actors compare, though, to our two leads. Sarandon and Lange are masterful here, as they have been so often in the past. These are two ladies who can capture a moment like few others. There’s a bit in the pilot in which Lange, as Crawford, has to act in a scene for the movie, and she is brilliant, highlighting the actress as much as the character.

There’s a certain parallel that cannot be avoided that Sarandon and Lange are women of a certain age, just as Bette and Joan were. The difference here is that they can get good work, as evidenced by both FEUD and all of the other projects they continue to do. The very existence of this show proves how far things have come.

Yet, at the same time, the sexism highlighted in FEUD is still an issue, timely in its expression. While Hollywood may be getting better, there is still a long way to go, and with the current political climate, some of the small-mindedness is currently front and center.

Those themes aside, though, FEUD would stand on its own in any time simply because it involves terrific performers doing impressive things in a highly-stylized, yet crumbling, world. The glamor that everyone wants to pretend is there stands in stark contrast to the reality of pretend that reigns in Los Angeles. FEUD shows us both sides, the charade and what’s behind it, in delightful ways. Far from being fake, the actress’ (and others’) attempts to present their best selves is calculated and says a lot about the authentic personalities behind it, which each shot seemingly carefully constructed for maximum dynamic impact.

I’ve only watched one episode so far, but I can already tell that Ryan Murphy has done it again. Far from complaining about all his varied works on the network, I appreciate that he keeps churning out such good stuff with such a strong cast month after month. We’re in the golden age of television, and FEUD is a worthy example of that era. Expect to see it garner a lot of nominations, and hopefully even wins, come award season.

FEUD: BETTE AND JOAN premieres tonight at 10/9c on FX.