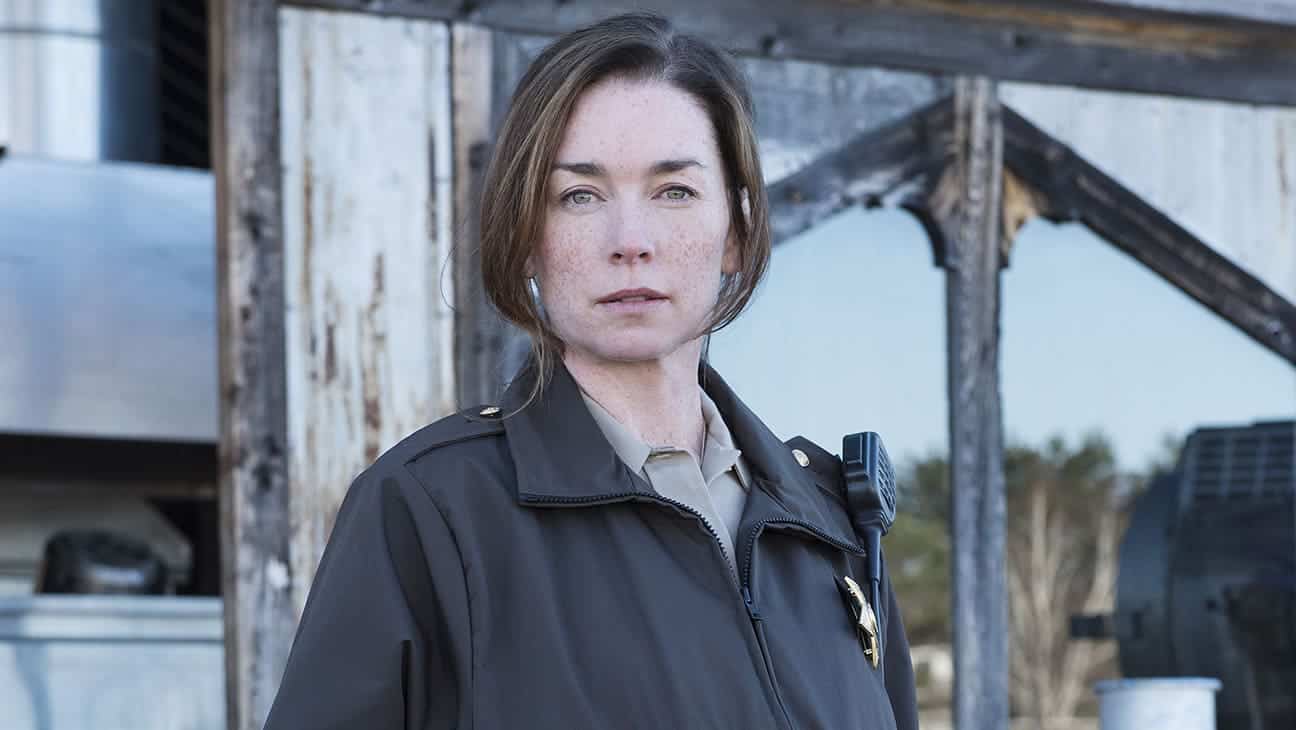 USA’s latest drama is EYEWITNESS. Adapted from the Norwegian series Øyevitne, it’s a slow-burn crime drama about the aftermath of a triple homicide, the teenagers that witness it, and the law enforcement officers who seek to distribute it. With washed-out colors and a slow-moving pace, it’s likely to bring up shades of The Killing, among others, but I don’t feel like it quite lives up to that level of quality.

The show begins pretty early on with the murder, and the officer who arrives to investigate, the primary protagonist for EYEWITNESS, is Helen Torrance (Julianne Nicholson, Masters of Sex, Boardwalk Empire). She’s from the big city, but has moved to a small town with her husband, Gabe (Gil Bellows, Ally McBeal, House at the End of the Street), and foster son, Philip (Tyler Young, The Avatars). Frustrated with the boring life, Helen likes the excitement of this incident, but soon clashes over jurisdiction with an FBI agent, Kamilah Davis (Tattiawna Jones, Flashpoint).

Helen’s story unfolds almost exactly as expected. Looking into the crime goes just as it does in every other show where cops and feds clash, and even giving Helen a light-hearted partner, Tony (Matt Murray, Rookie Blue), doesn’t make much difference. It’s a well-constructed story, other than Helen being a little loose with talking about her work in front of Phillip, but it’s pretty much the same as at least a dozen other cable programs in recent years.

There is a subplot with Kamilah that might be a little outside the typical, but that felt more forced than engaging. EYEWITNESS is a drama, and there will be twists to keep the story moving over ten episodes per season, but I was just hoping for something a little better than this. The same disappointment applies tothe pilot’s “twist” ending.

Helen’s home life is a more interesting part of the show. I love Nicholson, always good in everything she does, and her character’s relationships are authentic. It’s easy to see her love for Gabe, and how Gabe is much more into being a foster parent than she is. She struggles with work/life balance, of course, but I think generally, her unit, while sticky, is sympathetic.

Where the show kicks up a few more notches for me is Philip’s story. Dealing with a druggie mom, liking the foster parents he’s been placed with but not really feeling like they’re his family, and struggling with being openly gay, is plenty for a kid to deal with. But the fact that he is the EYEWITNESS in the title, along with his deeply closeted friend, Lukas (James Paxton, Term Life), whom Philip is just hooking up with when things go down, and there’s some real drama to mine here.

Television has gotten better about its portrayal of homosexual characters in general, and EYEWITNESS has something I haven’t specifically seen before. It puts a complex, tense situation in a seriously-made drama, and the result is very compelling. My favorite scenes are easily the ones with Philip and Lukas as they work out what they mean to each other and discover their own identities.

So EYEWITNESS is a mixed bag. The quality is pretty decent, despite a few minor missteps, but it’s the lack of originality that drags it down. When it covers new ground, it mostly excels. What I want from the series is to rely less on what other shows have done and try to find new angles to approach. It’s probably too late for season one to give over to that completely, but if the Philip / Lukas story stays central, it might be worth it to stick around and see what comes later.