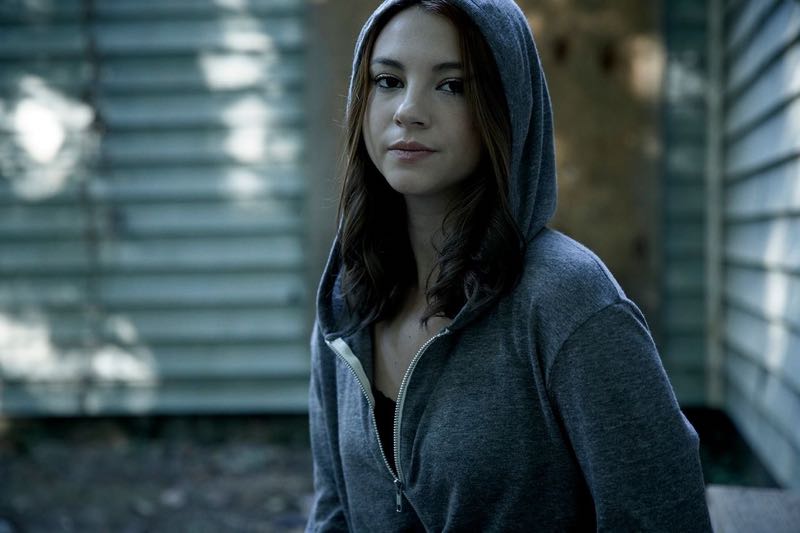 Life in the Ramapo Mountains is turbulent for the community of Walpole, but it is even more intense and intertwined for the Jensen family.  Harold Jensen (Martin Henderson) works for the Walpole Police Department, and between his family and his job, he found himself caught sitting on a fire-keg of problems ready to explode.   In Season 1, his wife Jean (Julianne Nicholson) mistakenly hit a young boy on a bicycle from the nearby Rampo tribe, a devastating accident that nearly ignited a war between the tribe and town.  Aiding in Harold’s quest to keep the peace between the Ramapo tribe and the town — and striving to keep his Jean out of harm’s way — is ex-con Phillip Kopus (Jason Momoa), the former high school sweetheart of Jean, who also a member of the Ramapo Tribe.  While not exactly close friends or even on friendly terms, Harold and Phillip are intent on protecting Jean and making sure that the brewing hostilities between the town and tribe stay peaceful.  Phillip also ran a drug dealing enterprise which put him on the radar of some rather unsavory Albanians and it landed Phillip back in jail after a shoot-out in the Season 1 finale.  Yet as Season 2 picked up a year later when Phillip got out of jail, things have not exactly cooled down between the Ramapo tribe and the town, and once again there is a murder to be investigated.

Caught up in this crazy world of violence and tension is Harold and Jean’s eldest daughter, Rachel (Allie Gonino), who had been dating Junior (Kiowa Gordon), a member of the Ramapo tribe, but as events got more and more out of control, their relationship suffered under the tension in Season 1.

In an exclusive interview, star Allie Gonino talked about the challenges ahead for Rachel and Junior’s relationship and whether the characters will be caught in the crossfire again, with perhaps another big death looming on the horizon.

Will Mac’s (Gary Farmer) murder in the Season 2 premiere have a ripple-effect throughout the rest of the season for all the characters?

ALLIE:  Yes.  It’s going to kind of set up the rest of the season for a bunch of dirty secrets to come out.  And we’ve met some of the new characters and we are going to get to know them a little bit better and see how they are all involved — like Levi (Wes Studi) and we are going to see how he fits into the picture.  So it’s going to be a very dramatic season.

Will Mac’s murder have any bearing on Rachel or is she just obvious to what is going on?

ALLIE:  (Laughs) She is definitely going to be more obvious than the rest of the cast.  She’s kind of got her own situation going on this season.  She’s becoming more curious and learning about schizophrenia and her mother’s sickness, and she is going to be delving more into that side of her life.

Where exactly is Rachel’s head at?  Is she worried that she could be exhibiting symptoms of the same problems her mom has?

ALLIE:  Yes, absolutely.  That’s why she is so curious.  She’s still 17 and pretty impressionable, and she kind of has some paranoia about turning into her mother and becoming sick and not being able to function in a successful relationship.

Is that going to prevent Rachel from pursuing any romances this season?

ALLIE:  Yes.  Junior comes back and expresses an interest in wanting to date her again, and she will have some inner conflict with that relationship.

How would you describe Rachel and Junior’s relationship at this point?  Are they still friends? Where are they at?

ALLIE:  Junior has actually been at juvie for the last year.  So they haven’t really talked much at this point.  I think when he comes back things are still where they left off.  They are broken up, and I think she is open to the idea as she still cares about him and loves him.  But I think this whole new schizophrenia sickness is also preventing her a little bit from fully investing in their relationship.

How are Rachel and her mom?  Are they getting along better this season or is their relationship even more fracture-filled?

ALLIE:  Actually, I think it starts off definitely better than last season. I think they have settled into their new dynamic.  Jean has been sober for a year now and is on her medications, so I think she has afforded Rachel a little bit more freedom and, as you’ll see towards the end of the season, those ties start to get a little bit looser.  But not because Jean wants them looser.

Do you think Rachel’s parents trust her a bit more than they did last season — as they didn’t seem to trust her at all last season?

With her parents both preoccupied with everything else and what is going on with Phillip Kopus is there even time for them to pay attention to their daughters?

ALLIE:  Not so much! We kind of joked when we started shooting this season that we don’t even see Kate (Annalise Basso) for the first 2 episodes and we were like, “Where did she get sent off to? To boarding school or something?”  (Laughs)  So you won’t see a ton of parental-daughter interaction.  That would not be as entertaining to watch.  All the entertaining stuff is the town and Kopus and all that — and the romance too.

We love the romance!  But Phillip Kopus is back and he is a big part of what happened with Rachel’s father and her mother last season.  Is he going to kind of insert himself back into their family life or is he off on his own storyline?

ALLIE:  I wouldn’t say that they get too involved just by virtue of Phillip and Kopus working together, sort of, again.  That will put a little bit of pressure on the dynamic of Phillip’s relationship to the Jensens.  But I can’t say too much.

If you were to give some advice to Rachel, what would you tell her at this point in her life?

ALLIE:  I would say, “Get the hell out of Walpole!  Next year when you go to college, do something with your life and find your passion.”

Do you think Rachel is even thinking that far ahead at this point or is she still just so caught up in the present?

ALLIE:  I think she is in the present.  I mean, she’s toying with the idea of studying psychology once she gets to college.  But I don’t think it is actually a passion for her.  It’s more that she’s interested in it because she is curious about schizophrenia and afraid of becoming subject to it.

What would you say is the biggest surprise of this season?

ALLIE:  (Laughs) I can’t tell you!  I can say that there are a couple of major events — quite a few actually — well, oh my gosh, so many.  There are definitely a couple of major events and you are going to find out how one of the characters plays into the story, even more so than you thought.  Gosh, there’s so much.  It’s so good. There’s so much crazy stuff that happens.

What for you has been the most fun working on the second season?

ALLIE:  The thing that was most fun about it was also the thing that was the most stressful about it, which was that it was incredibly emotionally draining and taxing. As you will see, Rachel just goes through a lot this season and having to be in that head-space all the time was really hard for me emotionally.  But it was also the most rewarding in terms of work and I think this season is going to be the thing I am most proud of in my acting career so far.

ALLIE:  Completely different.  They were such different tones.  I have been able to work with some pretty stellar actors on the show and just being on a set where everyone cares about taking care of the story and wants to do a good job and be authentic has been rewarding for me.  That’s the main thing in acting is to tell the story and be as authentic as you can.  I think that is the number one thing I have been able to take away from this experience.

Would you say that there is a particular skill as an actress that you might have picked up that was a little bit different than what you used or learned from THE LYING GAME?

ALLIE:   Honestly, my secret weapon is music.  When I need to get to a place emotionally that is a bit challenging, I will listen to music that connects me to a place in my past that was beautiful or tragic for me in some way.  Then, if music doesn’t work, I will think about something really bad — like my niece getting killed, which is very morbid — but sometimes you have to get crazy in your imagination to get to the places that you need to get to.

What songs take you to those kind of places?

ALLIE:  One of the songs that I used last year was “Ride” by Lana Del Rey. I don’t even know why.  I think it is just the composition, the production and harmonically.  I also like to listen to “Holocene” by Bon Iver, which was a song I listened to a lot while working on THE LYING GAME and that was kind of, oddly enough, a very lonely time in my life and music was what I leaned on to keep me company.

Are there songs that you use to take you out of those dark places?

ALLIE:  (Laughs) Pretty much any of Katy Perry’s songs lifts my spirits.

For fans tuning in this season, what would you like to tease about what is upcoming on THE RED ROAD?

ALLIE:  Yes, actually this week my solo EP came out on iTunes, Amazon and all digital platforms.  It’s called “Hollywood High.”  I produced and recorded it last summer and it’s finally coming out.  I’m really excited, so go check it out!

In addition to checking out Allie’s new song, make sure to tune in to find out whether Rachel and Junior’s young love will help them steer clear of trouble and who is not going to make it through Season 2 alive.  All new episodes of THE RED ROAD air on Thursday nights at 10:00 pm on Sundance Channel.