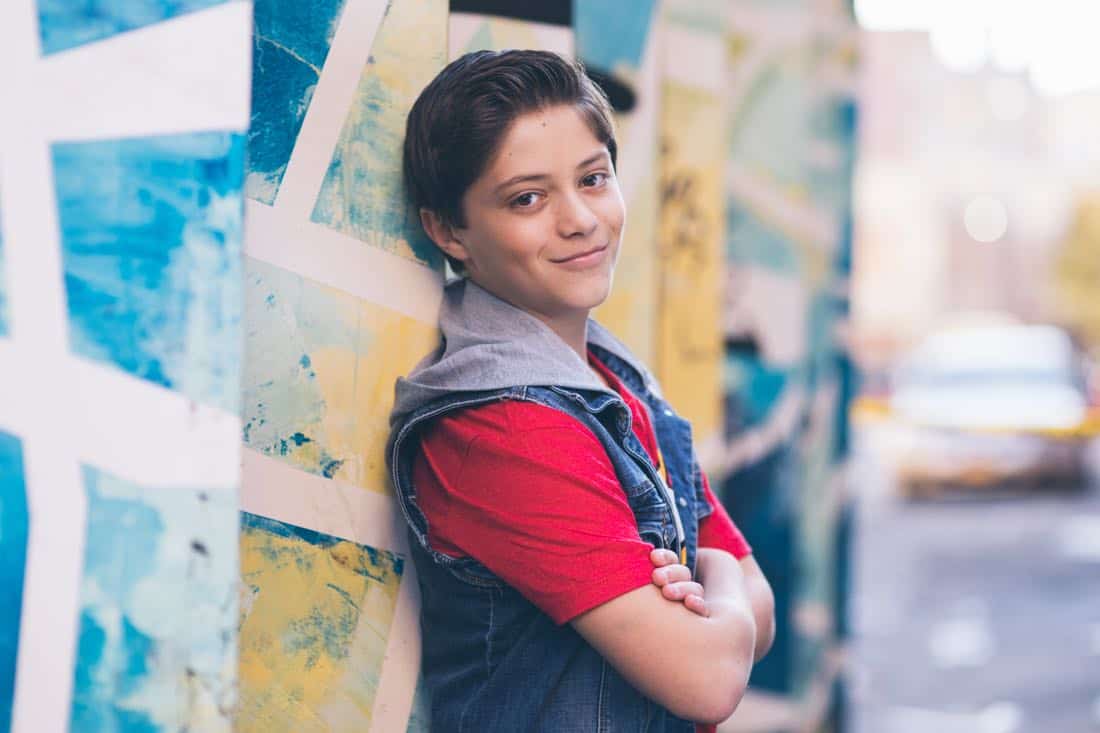 In the new Netflix series THE PUNISHER, Kobi Frumer costars as Zach Lieberman, the son of Micro (Ebon Moss-Bachrach), who Frank Castle (Jon Bernthal) befriends and looks out for. Zach’s portrayal is spot on and really helps the audience feel some of the anguish, anger and tenacity that his character displays as the net of danger moves closer to ensnaring Micro’s family. In an exclusive interview, Kobi talks about the joy of getting to work on the Marvel series and a few of the key lessons he has learned as a young actor in Hollywood.

What appealed to you about portraying Zach Lieberman and working on Netflix’s THE PUNISHER?
KOBI: Everyone who knows me knows this was a dream role for me. Ever since I was a little kid, I was always obsessed with superheroes. I was so excited to play Micro’s son.

How would you describe who Zach is?
KOBI: Zach is a typical kid who is struggling with the death of his father. To make things worse, his dad died under a cloud, accused of crimes he didn’t commit. Zach was then bullied and lost a lot of friends because of what his dad was accused of. All of this caused him to become angry and aggressive, lashing out at the people he can — namely his mother and sister. He’s a kid who is hurting, and responds by trying to hurt back but deep-down Zach isn’t a bad or tough boy at all, he’s just trying to protect himself.

What do you most admire most about Zach?
KOBI: I don’t think he was able to handle the tragedy of his father’s death the best way he could have. But everyone handles tough situations differently and I admire anyone who does their best to get through something like this.

What was it like working alongside the talented ensemble on THE PUNISHER?
KOBI: Amazing. I worked with so many talented actors and had a blast playing Zach. I learned so much from the awesome cast. Don’t get me wrong, it was one of my toughest roles so far, but I feel so lucky to have had the opportunity and hope the fans love the series as much as we all did working on it.

Any favorite scenes that you can share from working on THE PUNISHER?
KOBI: The Thanksgiving scene was pretty intense, and I was able to work with so many of the actors. Being with all of these actors at the same time, would have to be one of my favorite moments.

What has been your favorite part about working on THE PUNISHER?
KOBI: Any episode that involved stunts! I definitely loved working on the stunts!

What surprised you the most working on THE PUNISHER?
KOBI: Unlike the other Marvel shows, the story of the Punisher stayed so close to the original comic book story.

Then, as an actor, what has been the one thing you have taken away from the experience of working on THE PUNISHER?
KOBI: How dedicated and hard working the crew is. The entire cast relies so much on the crew, and we can’t get our jobs done without them.

Then what are the perks of where you are in your career right now?
KOBI: I have been so fortunate to interact with the fans, and I hope to meet more of you. I am also having a blast meeting so many of the Marvel Universe actors. I am in awe of them! But my absolute best perk was getting a personal tour of Marvel’s headquarters in NYC.

Has there been any great advice you have gotten about working as an actor?
KOBI: Don’t act! I know it sounds crazy, but it needs to be real, so you have to make it a real extension of yourself.

What advice would you offer to other upcoming and aspiring actors?
KOBI: Go For it. Follow your dreams. But just know, it’s a job- it’s hard work. If you love it — it’s worth it!

Do you have any other upcoming projects that you can share that fans should keep an eye out for?
KOBI: I am excited for season 2 of “Nella the Princess Knight” and continuing the voice of Sir Blaine and other characters. I also have several projects in the works, but nothing I can tell you about just yet.

To see Kobi’s strong performance as Zach Lieberman, Season 1 of THE PUNISHER is now available for binge-watching on Netflix. Then to follow more of Kobi’s growing career, you can follow him on Twitter @KobiFrumer