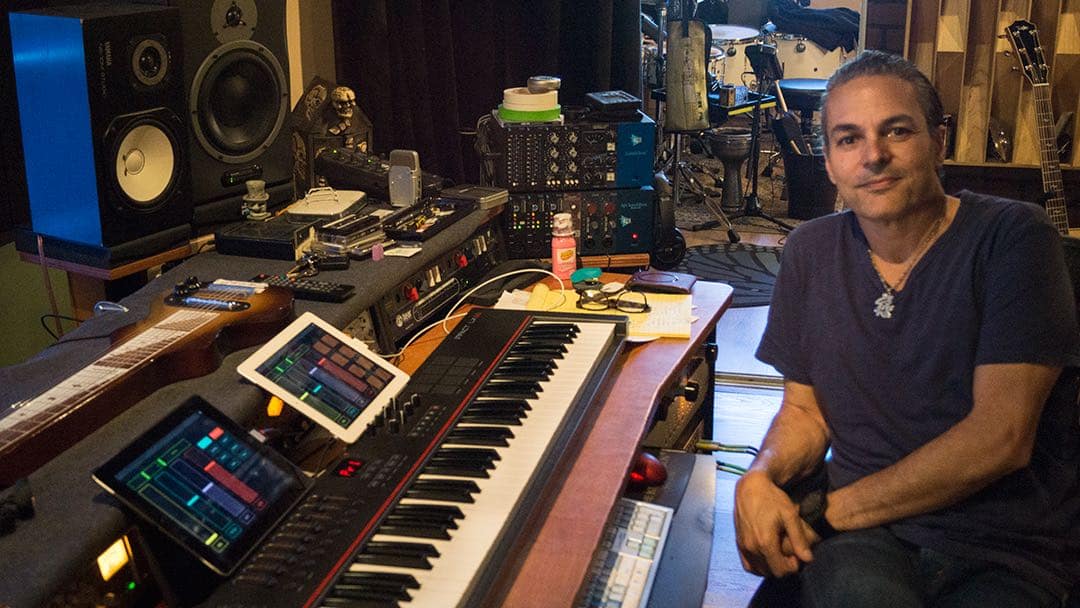 Most musicians are content to conquer one area of performance, but for Fred Coury, his ambition led him from performing live with the rock group Cinderella to taking on a full time career composing for sports and television.  Music is deeply embedded in Fred’s soul as he grew up studying and performing music and he followed that passion on the road and around the world.  Looking to expand his art and explore new avenues of musical expression, Fred ventured into the world of composing music for sports teams and television, and currently composes for NBC’s medical drama THE NIGHT SHIFT.  Whether it is racketing up the tension on the battlefields or within the frenzied hallways of a hospital, Fred innately knows what sounds and instruments will help viewers feel the intensity and emotional turmoil of such life-and-death situations. Bringing his passion and expertise to his work, Fred delivers a sound that crosses the spectrum from heart-racing and blood-pumping to bone-chilling and haunting.  In an exclusive interview, Fred shares how he creates the unique sound for THE NIGHT SHIFT and what he has learned along the way from arena to screen.You have been composing for THE NIGHT SHIFT since the series began 4 years ago. What was the initial challenge of creating a sound unique to this particular medical drama?FRED:  Our hospital is located in San Antonio Texas and a few of our doctors are ex-military who served in Afghanistan. There have always been flashback scenes in the earlier Seasons that took us back to the Middle East, but in Season 3 and now in 4, we find our doctors on the front lines. The challenge was keeping a cohesive sense of place, whether in Texas or the Middle East. What instruments have you chosen and relied upon to create that sound?FRED:  For the main focus of the show/hospital, slide guitar and lap steel is the sound of choice for us. Nothing says Texas like slide guitar (or ZZ Top, or BBQ, or Stevie Ray Vaughn).What was the transition from live performance to composing for a TV show like for you?FRED:  Terrifying at first. Performing live was a walk in the park compared to composing for a major TV show. When you’re on a headline tour, every show is a winner. Even if we had a bad night, most people had a great time and thought the band rocked. There are no “notes” or real deadlines. In TV, I quickly discovered that every single thing you do gets scrutinized and is closely looked at. We have incredibly tight deadlines and turn around times. Talk about being under the microscope. I do like working under pressure though, so this is the perfect life for me.Were there specific challenges that you encountered in working as a television show composer?FRED:  One area was learning the ropes of how shows and productions work. There are a lot of moving parts and everyone on the production is just as busy as you are. Oh, and sometimes you have to be a mind reader and you must have your decoder ring with you at all times! I think I adapted rather quickly but I didn’t know how the inner workings of TV worked. I’m still learning.So far, what has been your favorite part about working on THE NIGHT SHIFT?  FRED:  The people. Everyone from the actors to the crew. What a great team!Do you have any favorite scenes from prior Seasons that you can share that were cool or fun to compose for?FRED:  The Middle Eastern scenes are a blast. In Season 3, I played all of the live violins and sang a creepy act out in Arabic. That was pretty fun. There is one in particular in episode 401 but you’ll have to wait til that airs on June 22.Some composers create specific sounds or musical themes for characters on a TV show. Have you done that for any of THE NIGHT SHIFT characters and, if so, what instruments were used for those characters to get that specific sound?FRED:  I have done the sonic themes on THE NIGHT SHIFT. Jordan is a pretty acoustic guitar while TC (Eoin Macken) is a baritone National Steel tricone and when he’s in a “mood”, the 1936 national lap steel becomes his mood. When Jordan (Jill Flint) gets in a mood, the acoustic lap slide guitar that Joe Bonamassa gave me makes a great sonic theme for her. Drew (Brendan Fehr) has a heavily stylized sonic theme as well.With the heavy use of military flashbacks and scenes in military settings on the show, what kind of sound and instruments are you using to create the sound unique to that environment or situations to differentiate it from the hospital scenes?FRED:  Snare drums and horns/trumpets help with the military scenes in the US and drumbeks and Middle Eastern percussion help the Mid East scenes. I always play all of the perc live.What has been one thing you have taken away from your experience working on THE NIGHT SHIFT for the past couple of Seasons?

FRED:  It’s a complete, 100% team effort. Everyone has each other’s backs and we are all looking up to the show collectively to make every bit of it better. You also composing for the L.A. Kings and Portland Trailblazers. How have you balanced working on both THE NIGHT SHIFT and creating those teams unique sounds simultaneously?FRED:  I have two studios. The big one is in Burbank. That has a drum kit always mic’d and ready to go, and tons of guitars and perc. My second studio is at home and has exact mirrored computer rigs but no live drums and only a couple of guitars. I’ll do the TV show at the big studio from early morning until the evening and then come home and work on the sports stuff at night when all are in production at the same time. It’s definitely a seven day a week job.As sports arenas are a high-octane environment, what sound or instrument do you rely upon to convey your music for the teams?FRED:  It depends on the sport but hockey definitely has huge live guitars and drums and quite a big orchestral template. Basketball depends on the market. Some markets are more dance-y than others but Portland likes to rock. I survey the teams and the fans before I get to work. I need to know what they react to before I can start creating themes for them.When not composing professionally, what do you enjoy doing with music in your own life?FRED:  I love producing and mixing pop and rock records if I have the time. What instrument do you think mirrors your soul the closest and why?FRED:  The Cello. It covers all of the emotional ranges. It can be quiet and reflective or can be quite loud and ornery at times. At this stage of your career, what do you think you have learned from the amazing variety of projects you have worked on?FRED:  It’s simply all music. I’m not undermining it in anyway. It’s incredibly powerful. Music is a universal language. Everyone, no matter where on the globe they are from, can speak that language in some way. I’m the luckiest guy in the world to be able to make music every day of my life and am incredibly grateful.Are there any cool perks of where you are in your career right now?FRED:  I’ve been enjoying the perks of the music business for 30 years. Yes, there are a ton of cool perks.Do any of your projects ever leave a lasting impression on you? Like what?FRED:  They all do, really. I learn from every one. Sometimes, I learn what to do and sometime I learn what NOT to do and sometimes I learn that the hard way. What advice would you offer to other upcoming and aspiring television and sport composers?FRED:  Just do what you do. Keep doing it and never give up and study, study, study. Watch videos, talk to other composers and take classes. There is so much to learn. And if you’ve already learned it, come teach it to me!What do you consider to be one of your proudest accomplishments as a composer?FRED:  Gosh, I’ve had so many. Not necessarily proud moments but just the “pinch me” moments. Like “I can’t believe this” kind of moments. Watching 18,000 people at Staples Center chanting along to the LA Kings goal song that I composed, the night that the Kings won the Stanley Cup was a pretty special one.Do you have any other upcoming projects that you can share that fans should keep an eye out for?

FRED:  Season 4 of THE NIGHT SHIFT premiers on June 22nd. Please watch! The lead-in for our show is THE WALL, the best game show on TV. I was fortunate enough to write the opening theme. And lastly, the sports team list keeps growing. Hopefully, I’ll see you in an arena in your town soon!To hear more of Fred Coury’s incredible musical work, be sure to tune in for all new episodes of THE NIGHT SHIFT when the show returns for Season 5 on Thursday, June 22nd at 10:00 p.m. on NBC.  All new episodes air this summer on NBC.  To find out more about Fred Coury’s work and upcoming projects, be sure to follow him on Twitter: @fredcouryThen Fred’s tremendous music for the LA Kings is currently available on iTunes and you can hear it here:https://itunes.apple.com/us/album/la-kings-arena-music-ep/id569903050