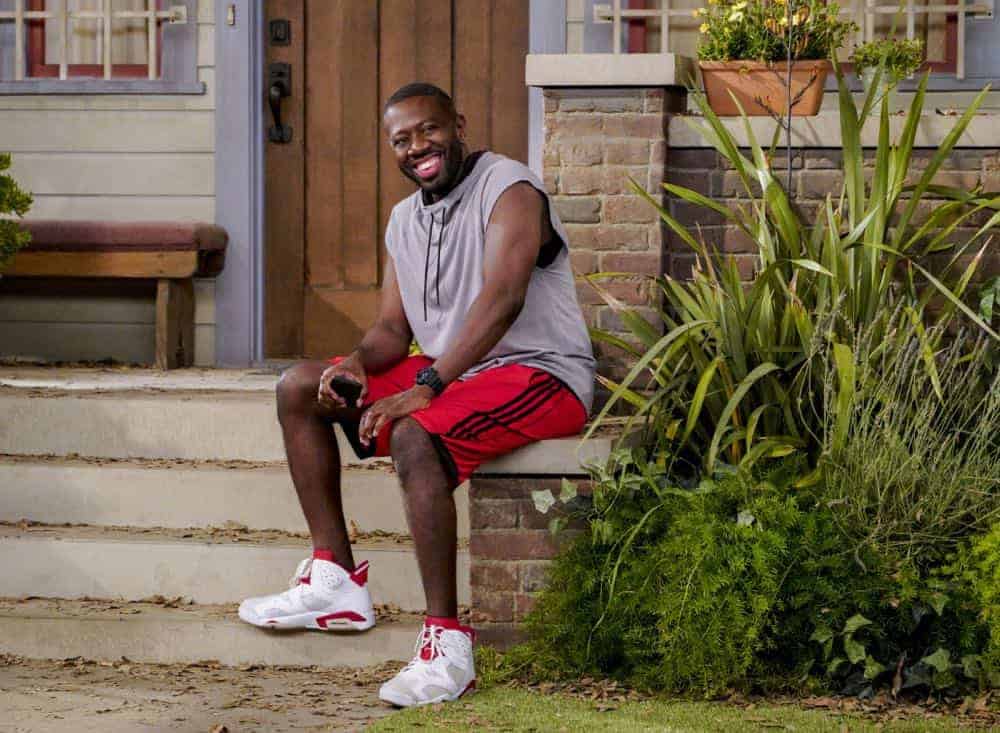 With passion and tenacity, Sheaun McKinney has boldly staked his place in the comedy world. Currently co-starring in the CBS comedy series THE NEIGHBORHOOD, Sheaun’s ability to portray a heartfelt yet realistic character just shines. In an exclusive interview, Sheaun McKinney talks about bringing his character Malcolm to life on screen and reflects a few lessons he has gleaned in his career as a working actor.

What was the initial appeal for you about portraying Malcolm and working on CBS’ THE NEIGHBORHOOD?
SHEAUN: It was Jim Reynolds, the creator. When I spoke with him, we had a connection. I heard what he wanted the show to be and when I read for the role of Malcolm, there was so much that I could connect with; and there was so much that I wanted to say and bring to the role.

How would you describe who Malcolm is in the series?
SHEAUN: Malcolm is the heart of the series. I hate to say that about myself, but I really think that is where he falls in the show. I really think he is the heart and whether that’s right or wrong, he’s not going to stand for injustice. He’s not going to stand for any type of wrongdoing. He speaks his mind for better or worse, but he also tries to bridge any gaps. He’s a thinker and he’s just trying to find his way in life.

What do you most admire about Malcolm?
SHEAUN: His unflinching quest for knowledge. In every episode he is reading a different book. His ability to find the reasoning in any situation — that would be what I admire most.

What is it like working alongside such a talented ensemble on THE NEIGHBORHOOD?
SHEAUN: It’s an absolute dream every day to watch and learn from each of those people. They are so warm, friendly, welcoming and ready to listen which doesn’t happen all the time. Cedric is a legend in this industry. Tichina [Arnold] is a legend. I used to watch her every night on MARTIN reruns. Max [Greenfield] and Beth [Behrs] both came off of hit shows and they could’ve easily walked into the door with any attitude or ego and they didn’t. They came in ready to listen and work. Marcel [Spears] is so talented. Little Hank Greenspan is going to be a Daniel Day Lewis one day. It’s been a true blessing to learn from each and every one of them.

How would you describe the dynamic between Malcolm and Dave?
SHEAUN: It’s great, they get along and understand each other very well. They understand the temperament of Calvin very well. They are both thinkers and they both have a lot of heart. Where Dave might be a little naive about some things, I think Malcolm is more grounded.

Then what is the relationship like between Malcom and Calvin?
SHEAUN: It’s a loving relationship. They do butt heads, but it’s because they are such passionate people. They both care so much and sometimes their wills to do something get in the way. But at the end of the day, it’s a relationship with love and care for each other.

What has been the best part about the experience of working on THE NEIGHBORHOOD?
SHEAUN: Aside from the paycheck (laughs), it’s been great to see the response for all the hard work that you get to see firsthand. Not just for the writers, but the creator, the DP, the lighting guys, the camera crew, the cast, and everyone that works on our show. Everyone has worked their ass off and to see people respond in the way has been the best thing. To see this come to fruition and to hear that we got picked up for the full season and to see everyone’s reaction has been amazing.

What do you think viewers will appreciate about the show?
SHEAUN: It’s honesty. It’s honest about what our differences are and it’s not afraid to go certain places that you don’t see in sitcoms or that you haven’t seen in a long time. But we also do things through the lens of humor, and humor is completely disarming. So we aren’t beating anyone over the head and we aren’t being overly aggressive with anything. These issues are just things that come up naturally in the landscape that we live in. And that landscape is in the show and we are very honest about everything.

You also costarred in the comedy series GREAT NEWS as Wayne. What did you appreciate from working on that show?
SHEAUN: That was one the greatest experiences I’ve ever had. That show was so well written and so funny. Every actor in the show was hilarious. We all still hang out. It was great, the writing on that show was great and every single actor was great. I remember my first day showing up, the first person I ran into was Nicole Richie, and all I knew about her was what I saw in the tabloids. I am telling you she is one of the coolest human beings I have ever encountered. She is smart, graceful, sweet, talented and when you talk to her she is engaging. I was blown away by her and she was the first person to greet me. I was kind of lost and she told me where to go. The cast still has dinner at her house every now and again. I miss that whole bunch of people. It was such a great experience.

What has surprised you most about your career so far?
SHEAUN: When I first came to L.A., I was so intent on doing heavy dramatic work. I had done comedy in the past. I have a theater background and I’ve done improv, but I really thought that I would first get my way in with intense dramatic work and then comedy took off first. Now I’ve been able to do some dramatic work like on SNOWFALL and ROOM 104 on HBO which will be coming out soon. The people that have seen SNOWFALL and now see me do sitcoms don’t even know that I’m the same person. I take that as an extreme compliment. I was surprised by how quickly the comedy work took off. I wanted to do dramatic work, but if they think I’m funny then that’s great. (Laughs)

Then what are the perks of where you are in your career right now?
SHEAUN: There’s a lot of perks. It’s funny when you’re out at restaurant or out in public and they get any whiff of the fact that you are on TV, the service changes dramatically. You get more attention paid to you and your food might come out a little quicker. But really at the end of the day, to be blessed enough to be financially secure at the moment. That is a blessing and that doesn’t always happen and you have to appreciate that.

What has been your proudest achievement as a working actor at this point in your career?
SHEAUN: Every time we do a play with my theatre company, that’s the proudest moment. Because those are pure passion projects. Those are things we put our blood sweat and tears into. We’ve done plays for full houses and we’ve done them for no-one in the audience. We go on to present at the end of the day and to be able to work with people I consider my family is extremely rewarding. So whenever I get to do that type of stage work and watch people react to that, I find that extremely rewarding.

Has there been any great advice you have gotten about working as an actor?
SHEAUN: I remember the first professional play I did. I was born and raised in Miami and I had no idea that the theatre was professional. I was doing this play there and I didn’t know people reviewed our stuff in the paper. I was sitting backstage and the stage manager brought back a stack of newspapers for the cast and he said the reviews were out. One of the lead actors, John, said to me before I could grab the paper in this serious voice, “Don’t you read that.” When I asked why, he said, “If you believe them when they say you’re good, you’ll believe then when they say you’re bad.” I really took that to heart and from that moment, I don’t ready any reviews, I don’t want to know the ratings, and I don’t watch my own work. I treat it all like live theatre and then I walk away from it. I think that has saved me from a lot of stress that I see other artists go through when they get caught up in whatever anyone else thinks.

What advice would you offer to other upcoming and aspiring actors?
SHEAUN: Stick to your faith. Do not give up. And certainly do not give up for what are other people’s opinions pressing on you. If you are talented enough, and if you have the will to be out here or in New York or Chicago, no matter what you want to do, it is going to work. It is a matter of how much time you are willing to put into it. You have to keep working. Keep doing it and don’t let anyone else be the judge of your success.

Do you have any other upcoming projects that you can share that fans should keep an eye out for?
SHEAUN: We just got picked up for a full season so you will be seeing more of us on the show. I just did a film called “Boss Level” with Frank Grillo and Mel Gibson that will be out next year. I also did an episode of ROOM 104 the anthology series on HBO which I am really excited about people seeing.

To see more of Sheaun and his fun performance as Malcolm, her sure to tune in for all new episodes of THE NEIGHBORHOOD on Monday nights at 8:00 p.m. on CBS. Then to see special previews for the show you can follow it on Twitter @TheNeighborhood and to keep up with Sheaun’s career, you can follow him on Twitter @SheaunMcKinney.

THE NEIGHBORHOOD – Meet the Cast:

THE NEIGHBORHOOD – Welcome To The Anniversary preview: