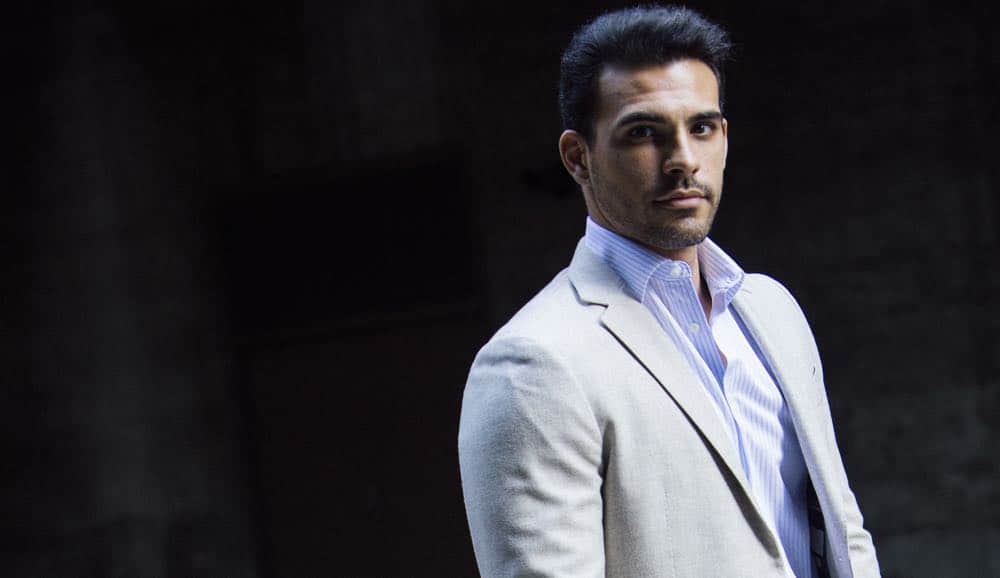 Nothing is more desirable in life than knowing that you are part of something extraordinary. Geovanni Gopradi thoroughly appreciates just how incredible opportunity it is to work on the Tyler Perry series THE HAVES AND HAVE NOTS and be a part of the OWN family. It is because Geovanni tenaciously pursued his career with the same passion and intensity he brings to his character that he has been rewarded. In an exclusive interview, Geovanni talks about working on THE HAVES AND HAVE NOTS and his thoughts on what it takes to achieve a fulfilling career.

What was the initial appeal for you about portraying Broderick and working on THE HAVES AND HAVE NOTS?
GEOVANNI: It was the show that appealed to me the most. It’s a loved show by so many and it’s Tyler Perry’s first hour drama.

How would you describe who Broderick is in the series?
GEOVANNI: A struggling immigrant chasing after the American dream through some questionable methods.

What do you most admire about him?
GEOVANNI: I admire that he is passionate about achieving his goals.

What is it like working alongside the talented ensemble on THE HAVES AND HAVE NOTS?
GEOVANNI: They were all so welcoming! They shoot so fast and seeing them work under such pressure is inspiring.

Who do you get to work with most in the series and what is that experience like?
GEOVANNI: With Renee Lawless and she does one hell of a transformation to play Ms. Cryer.

Any favorite scenes that you can share from working on the show?
GEOVANNI: There is a scene where I tell Ms. Cryer, I’m not a “piece of meat” and it’s my favorite because that was the first time I shift the power dynamic.

What challenges did you face working on the show and how did you overcome them?
GEOVANNI: The biggest hurdle is working through the speed in which Tyler Perry films. I kind of just have to let go with the flow and trust my instincts.

Has the show and its characters left an impression on you in your life? If so, in what way?
GEOVANNI: My character has. I was born in the states, so to place myself in the vulnerable mindset of an immigrant having to do what it takes to keep the status in the U.S., has really resonated with me now more than ever.

As an actor, what has been the one thing you have taken away from the experience of working on THE HAVES AND HAVE NOTS?
GEOVANNI: It for sure has renewed my confidence in my instincts as a actor.

What is your proudest achievement working on THE HAVES AND HAVE NOTS?
GEOVANNI: Keeping up with everyone else on the show. They are such great talents and I am in constant awe of them.

You also worked on WILL & GRACE. What did you enjoy about working on that project?
GEOVANNI: Everything! Watching these comedic geniuses work everything the writers throw at them into funny takes was an amazing experience. Being on a show that has garnished 16 Emmys has been an honor and a show that has such a social impact has been inspirational.

What did you take away from that acting experience on WILL & GRACE?
GEOVANNI: Comedy is pace and delivery. A very fine line to walk on as an actor.

What has surprised you most about your career so far?
GEOVANNI: So far I’m surprised I’ve been capable of acting on stage, film, TV, commercials and webisodes on genres like comedy, drama and action. And in both English and Spanish from Miami to NY and now LA.

At this stage of your career, what do you think you have learned from the roles and projects you have worked on?
GEOVANNI: Experience makes the difference. I am so grateful for all of the opportunities I’ve had and it all has been vitals step in my career.

Then what are the perks of where you are in your career right now?
GEOVANNI: The perk, although it might not seem like it, is that I still have to fight for my roles. The fight keeps me on my toes and I don’t have the luxury to sticking to characters I’m comfortable with because I’m still going after any role I can get.

Has there been any great advice you have gotten about working as an actor?
GEOVANNI: Someone once told me that this career is a maze and we each have to find our way unique to us.

What advice would you offer to other upcoming and aspiring actors?
GEOVANNI: Do it for the passion, treat it like a business, and work on it like a craft.

Do you have any other upcoming projects that you can share that fans should keep an eye out for?
GEOVANNI: I am continuing my work with the Special Olympics and I will begin directing the second season of FULL DISCLOSURE in Melbourne, Australia this month.

To find out more about THE HAVES AND HAVE NOTS, you can follow the show on Twitter @HAHN_on_OWN and on Facebook: https://www.facebook.com/TheHavesAndTheHaveNots/, or visit its website at: http://www.oprah.com/app/the-haves-and-the-have-nots.html. Then to follow what Gavin is up to as his exciting career grows, you can follow him on Twitter @gopradi. All new episodes of THE HAVES AND HAVE NOTS air Tuesday nights on OWN.