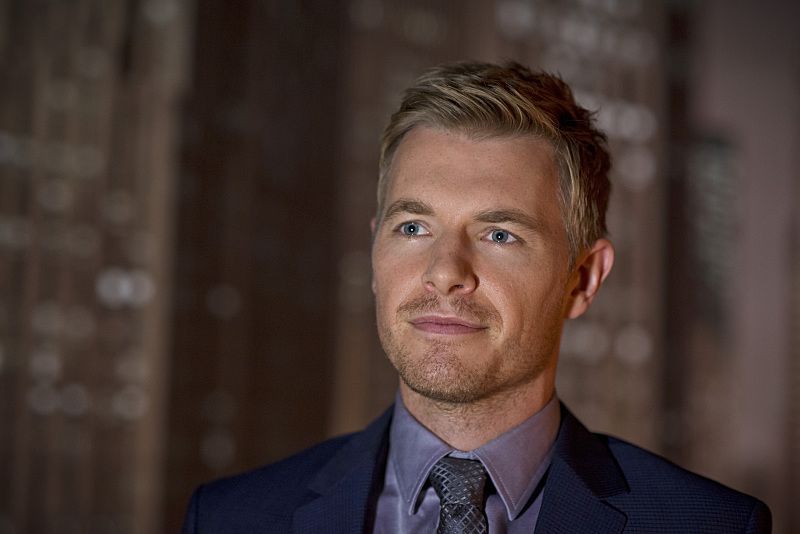 In the premiere of the new CW series THE FLASH, Barry Allen (Grant Gustin) discovered that he was not the only one who was genetically-effected that fateful day of the particle accelerator accident.  In fact, there are other metahumans in Central City, who unfortunately do not necessarily share Barry’s altruistic tendencies.  So the first season of THE FLASH will explore Barry’s journey to figure out his new role as a hero — and simultaneously if those around him are villains or allies in this brand new world where literally anything is possible.

One such person whose role of friend or foe has yet to be determined is Detective Eddie Thawne, portrayed by Rick Cosnett.  Partner to Joe West (the quasi-foster father of Barry and Barry’s boss), as well as secret boyfriend to Joe’s daughter Iris (Candice Patton), those two relationships alone put Eddie right smack in the middle of Barry’s professional and personal lives.  So just who is Eddie Thawne?

In a recent exclusive interview, star Rick Costnett talked about his character Eddie Thawne and teased what role Eddie has to play this season on THE FLASH.

What is it like playing Eddie on the show?
RICK:  Eddie is everything I’ve always wanted to be.  He is everything I think a father would want in a son.  He really is so fun to play because, at the moment, he is just a really good guy.   He’s really sensible.  He’s really lovable.  Everything comes very easy to him.  He is very able and he’s just quite delightful to play because as actors you kind of live out fantasies that you can’t do in your real life, which we get to do them between “action” and “cut.”  It’s going to be fun to see where he goes.  It is all just a bit mysterious at the moment.

How much did they tell you about Eddie when you first took the role?  Did they tell you where his story arc may go this season?
RICK:  They didn’t.  There was no script.  There was just one very long scene as I went through all the auditions.  But it kind of had everything in there.  They just kept giving me this one note — which at the time I didn’t know what it meant, but now it’s become completely clear  and why they did what they did.  To their credit, they have been absolutely incredible crafting this whole mystery.  I think the one thing that the fans are going to be wondering is:  What is going to happen?  So I didn’t know too much and they have kept giving me little tidbits just before we started as to exactly would be happening and when things would be coming out.  It has been deliciously surprising for me.

You seem to have been playing roles that have a bit of duality to them, where your characters can be perceived as either the good guy or bad guy depending on how you look at it.  Is that something you look for in a role?
RICK:  (Laughs) No, I think it is just something natural that comes to me.  You can’t control thinks like how you look or how you come across.  That’s the casting and producers’ job to see where you fit in, which seems to work well for me as I look very innocent.

It seems like you have been on quite a roller-coaster ride between your roles on THE VAMPIRE DIARIES and now THE FLASH.  Has it been fun for you?
RICK:  So much fun! I am so glad I can honestly say that I just adore everyone.  They are all just so lovely.  We are all kind of in love with each other.  It is that chemistry that has made the show so magical — because we are all on the same page and everyone is ridiculously talented.  I am so happy to be classed with this group of people.  And there is such a heartbeat to the show.  It is all about believing in yourself.  It really has amazing messages in it.

As for your character Eddie, we have not learned too much about him yet.  He is the partner of Joe and Iris’ boyfriend.  What is going through Eddie’s head to take on a personal relationship with Iris, when her dad is his partner?
RICK:  It is complicated.  He did not expect to fall in love with Iris.  It was during Barry’s coma and Eddie was driving Iris to see Barry every day at S.T.A.R. Labs.  He got to see how wonderful and sisterly she was with Barry, and suddenly one day he sort of woke up and started falling in love — and it is complicated because her dad is his partner.  That is really serious because there is a lot at stake.  He could lose his job  or Joe could go completely nuts over it. So it is very important that they keep it secret.  So when they kiss in front of Barry, there’s a moment of “oh, my god, please don’t tell anyone.”  So Eddie is grateful that Barry is keeping it a secret.  Poor Barry!

How does Eddie feel about Barry at this point?  Barry was in that coma for so long and now he is back.  Does Eddie see him as a rival or is Barry more of just a curiosity for Eddie?
RICK:  There is a lot underlying it, but Eddie just thinks Barry is endearing.  He doesn’t see Barry as a threat.  Eddie is just not the jealous type.  He is really secure and so confident.  It just doesn’t occur to him that Barry would be in love with Iris.  It’s more like he sees them as having a brother-sister relationship.  It makes it a little bit more irritating for Barry that Eddie does not care because it doesn’t occur to him.

Eddie as Joe’s partner is constantly around Barry because of the work they all share together at the police department.  So does Eddie begin to have an awareness that there are other things going on that he needs to investigate or check out as far as the metahumans?
RICK:  At the moment, Eddie is very much in the dark.  But things definitely start to unravel in a big way.  The producers are doing it very quickly and I think it really smart.  Things go down really quickly. We’ve filmed 9 episodes already and things are coming up a lot faster than I thought they would.

So Eddie is not going to stay in the dark for very long then?
RICK:  Let’s just say it is an epic journey.  My character really goes on an epic journey with lots of twists and turns. That is the most amazing thing for me — the arc that I get to have.  It is really exciting.

What would you like to tease that is coming up for Eddie?
RICK: (Laughs) I wish I could say more. I don’t want to give anything away.  Let’s just say things start to develop and things get very awkward.

Is there something you can tease outside of Eddie’s story that fans can look forward to?
RICK:  They just need to watch because things are going to happen very quick.  You wouldn’t want to miss one.

Has the pacing really surprised you at how fast the storyline is moving this season?
RICK:  Yeah, it really has.  I had goosebumps reading a couple of the episodes.   I had not realized how there are little hints in the pilot of how it all connects, and then suddenly it’s like, “Wait, what?!  That’s crazy.”  I think comic book fans are going to be absolutely delighted.  I couldn’t be happier to be a part of it really.

Did you do any research into the alter-identity of Eddie, or are you just going to be surprised when it happens?
RICK:  I did. I did a lot of research into the Thawne family.  His name is obviously based on all these different legends, and there is also a lot of information out there.  There are so many storylines and places it could go.  It’s exciting how many people’s imaginations have sparked to his story.

To find out what secrets Eddie may be hiding and what role he has yet to play in Barry’s world, be sure to tune in for all new episodes of THE FLASH, which air Tuesday nights at 8:00 p.m. on the CW.