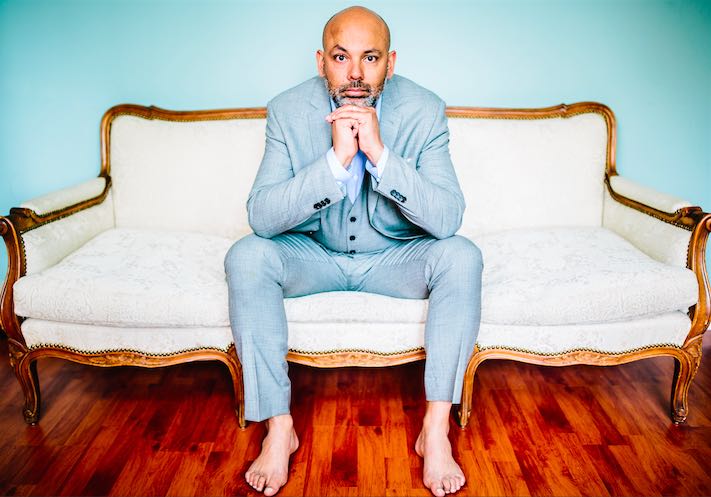 With a career spanning nearly two decades, Daniel Bacon has been blessed with a great variety of television roles from STARGATE SG-1 to THE L WORD to PSYCH and film including “50/50” and “The Age of Adaline.” Coming off the critically-acclaimed role in the Canadian drama series PARANORMAL SOLUTIONS INC., 2016 is poised to be another great year for Daniel as he co-stars in Steven Spielberg’s “The BFG” and along side Chloe Grace Moretz in “Brain On Fire.” In an exclusive interview, Daniel talks about working on these two amazing films.

What drew you to the role of Bonecruncher in “The BFG”?
DANIEL: Well, when I originally auditioned for the film, I didn’t audition for a specific characters. For the audition we were asked to create a character and create a scenario for them to be in based on the dynamic that Fleshlumpeater was the leader of a group of giants. The opportunity to work on an adaptation of a Roald Dahl book and to work with director Stephen Spielberg was more than enough of a draw for me to put in a tremendous amount of work into the audition.

What is the appeal of a character that can be described as villainous? Was there any one quality you admired about Bonecruncher?
DANIEL: I wouldn’t say that either of these things really came into play for me. However, during our early movement rehearsals we explored and improvised as a group (the other non-friendly giants) and discovered the dynamics of our character and how each of us interacted with each other. That process was really collaborative and exciting. We had an opportunity to infuse our own personal idiosyncrasies into our characters which was really cool.

What was the funnest part of working on this project?
DANIEL: Being surrounded by such talented people! Everyone on this project was fantastic, from my fellow castmates to the make-up team, to the wardrobe department to the entire WETA team. And of course having the opportunity to work alongside one of the create film people of all time.

Did you take anything away from the experience or feel like you learned something in particular?
DANIEL: I take away the fact I got the opportunity to work with Steven Spielberg! I learned the power of humility and professionalism. There were multiple Oscar winners scattered amongst the crew, but you would never know it unless you looked them up. They were so humble, down to earth and professional and treated everyone with such respect. It really was about the work on the set, but it wasn’t so serious that you couldn’t still have a laugh from time to time.

Is there something special about working on a Steven Spielberg film?
DANIEL: Well, you do get to put his name on your resume!

Why do you think people will love this film?
DANIEL: When you combine Roald Dahl, Steven Spielberg, (the late) Melissa Matheson and toss in Oscar winner Mark Rylance, you really have a winning combination. The incredible imagination of Dahl’s story, the beautiful script from Melissa, the fantastic detail and warmth of Mark’s playing of the title character and Steven masterfully weaving it all together.

Then what drew you to the role of Dr. Han in “Brain On Fire”?
DANIEL: I’ve been professionally acting for almost 20 years and have been able to put together a great resume. However, I’m not really in the place yet where I have the opportunity to pick and choose every role I play. So, being asked the question “what drew me to the role?” is a bit difficult to answer. My agent called with an audition, I prepared it and then went in the room and did the best to bring the character to life!

What was the best part about that filming experience?
DANIEL: However, once I found out I got the role I got very excited. The audition for the role of Dr Han was quite challenging with a lot of medical jargon and working in the audition room with the director Gerrard Barrett was really a great experience. Gerard was a real joy to work with and then once on set having the opportunity to work opposite Chloe Grace Moretz was also really fulfilling.

“Brain On Fire” seems to to be a heart-warming and inspirational story. What part did you really connect to?
DANIEL: The story of Susannah Cahalan is incredible. Once I booked the role I read the book in a couple of days, it is a fantastic read. My character is based directly on one of the medical professionals Susannah encountered on her decent into the madness, so getting to portray a real person was a new experience for me.

Why do you think people should tune in and watch it when it comes out?
DANIEL: It’s such a good story! When reading the book I had to keep reminding myself that this actually happened to someone. The way her family came together to help her through her ordeal and her fighting spirit, I think will resonate with a lot of people.

To see Daniel Bacon in his latest roles, be sure to catch him in the new film “The BFG” which is currently in movie theaters and look for “Brain On Fire” to be released in theaters later this year.