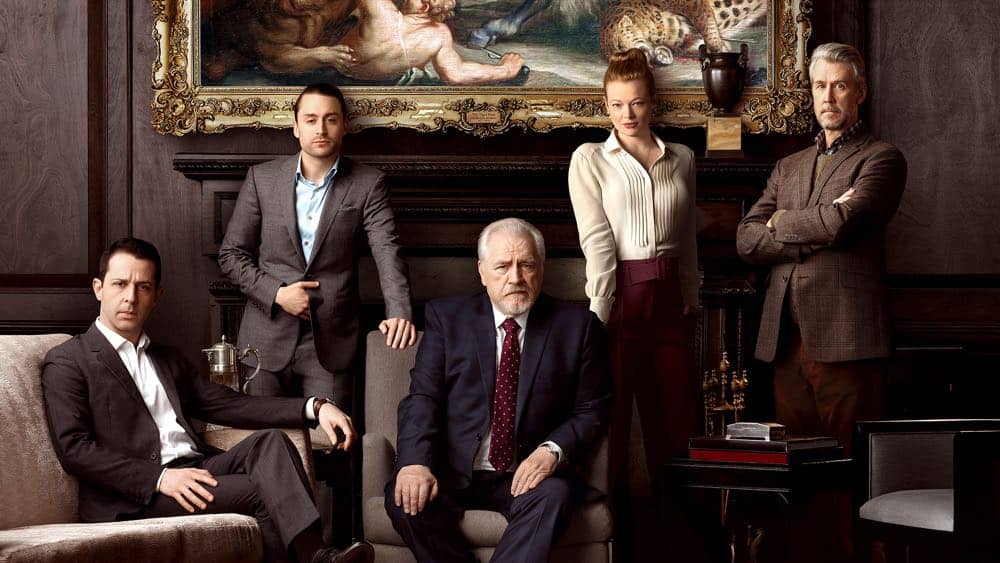 HBO’s new drama series SUCCESSION is a dark satirical look a powerful media family whose empire is on the verge of collapse due to the sudden mental decline its patriarchal head. As seen in the first couple of episodes, the Roy media empire is crumbling under the weight of its founder being unable to function at top capacity and because his heirs are not equipped with the same business instincts that made the company thrive for so long. In an exclusive interview, showrunner and executive producer Jesse Armstrong discusses the elements that were successfully woven together in order to bring SUCCESSION to life and where the quest for a successor may lead.

How did you assemble such a diverse and talented cast for SUCCESSION?
JESSE: Some people were favorites of Francine [the casting director] and a couple of people I suggested, so it was a group effort. But we were fortunate and we got lots of our first choices. So I’m really proud of the group we brought together.

How much of a necessity was it to have SUCCESSION actually film in Manhattan?
JESSE: I guess there is two parts to that. One is New York. It could have been in other places. It could have been L.A. This is a pretty global family. It could have ended up in Toronto or we could have seen them a lot in Dubai or Singapore or London. But once we decided that we were going to be in New York, I was really glad that we were able to shoot in New York because we shot most of our stuff in real locations — the sort of places this sort of family would hang out, and it’s quite an improvement being in those spaces. It is great for the cast and for everyone. It’s a show that has a sort of documentary-derived look and it feeling real is really important to the comedy and drama.

The show definitely feels more like a comedy than drama. Was that intentional?
JESSE: I feel like it’s meant to be sort of true, in that if you take away the comedic, ludicrous element of their lives — of the rich and famous — I think you end up with a sort of fake or too serious taking of our own estimation and view of people. We see the intimate lives of powerful people for a little while — to see them make errors and mistakes that we all make in our lives. I think if you take away the comic element, you’re actually seeing a different kind of fakery and that’s not what we’re trying to do as a show. Plus, I like comedy so I’m glad to have it in there.

The cast you have assemble definitely feels deft at covering the comedy, so you got very lucky in that regard.
JESSE: We were aiming for that — for people who have a comic facility.

The show has been described a bit Shakespearean, “King Lear”-ish. Would you say there is an analogy made there or would you just say that’s just more of a coincidence based on the type of story you wanted to tell?
JESSE: I guess. Brian [Cox] is very aware of that. He’s played it a great King Lear. Brian always fills those residencies, and as soon as you do a story about a powerful man who is at some level kind of harnessing up his power for the next generation, then you know there’s a bit of a whiff of King Lear about it. I don’t know if it sort of even leaned in to that or leaned away from it. It’s just one of the succession stories of powerful men and women, especially men, handing on power. There are lots of them in mythology and literature. So there’s a lot of places to draw on. But we were neither scared of it, nor did we be like, “we’ve got to do King Lear.”

When you were approaching the idea of bringing this project to life, what was theme that you really wanted to address?
JESSE: Hopefully, it is within the show, so I don’t want to figure out or recapitulate it too much. But I guess I love family shows: SOPRANOS and SIX FEET UNDER are two of my particular favorite go-to shows. I love things of a family dynamic. To me, it’s always fascinating to delve into if it feels really true. And I guess, we’re in an era, which is actually changing the media landscape with the tech companies, but the power of individuals and individual families to shape the world that we all live in, it feels like a very current theme. So I guess that was what we’re interested in.

Of course with the modern world we’re living in, and not just with the technology, but with the political landscape, is quite different than it was maybe a year or a year and a half ago. Was that something that was taken into consideration as you were crafting this together for the series? For example, with the media, we’re not sure if its intent is to really reveal what’s going on or to kind of manipulate things that are going on in the world today.
JESSE: Sure. I guess in a way then I’d say, in that regard, it feels like those were currents were already evident when I read the pilot and when we worked on this season. So in terms of the media acquisitions, I found when reading the pilot and then again when we were in the room thinking like, “Wow, wish this show was on because this thing, which is happening, would be so resonant of the show,” and now the show’s on and there is another round of those business deals in the media area. And in terms of the politics, I don’t think that’s changed massively. I guess this Trump era is so polarizing and the media is a relatively clear partner, but that was not untrue two years ago.

What are the kind of challenges that you guys encounter bringing the show to life and what we see on screen?
JESSE: Challenges. I guess I’m automatically trying to think about it in relation to other things that I’ve done or what was more challenging. For me, personally, I’ve never done a show of this scale — doing an HBO show ten hours. It was a bigger scale than I’ve ever done. I’ve done a show about the metropolitan police in London, BABYLON with Danny Boyle — that was a big show — but still not of this scale. So just making sure that you’re using — when you have an amazing cast like this and you have the opportunity to do something for a network like HBO — you feel a certain responsibility to the big meaty show and that weighs on you. But you get a lot of support. I guess that was a challenge.

HBO picked up the show for a second season, so how are you looking towards that right now?
JESSE: I’m just now out of the period where I felt exhausted and terrified of like, “I’ve got to do it again”, into the period of, “Oh, hurray! I’m doing it again.” I’m about to talk to the writers again. You’ll hopefully see as the season unfolds that the will be a lot of stories for us to pick up. We know characters very well now and we like writing them, so it feels full of potential.

What would you like to say is upcoming that the fans can look forward to, particularly as they are just finding out exactly who these people are at this point?
JESSE: There’s some good boardroom action coming up. Kendall’s plans — I think he’s always hoped that he would be given power by his dad, and I think he’s coming to realize that he’s never really going to be given anything. He’s gonna have to fight for it, which is maybe what his dad wants. And there’s a great episode where the family comes together for Thanksgiving, and that’s upcoming too. So I think there’s some enjoyable ones.

Are we going to possibly see another contender coming into the picture who might be taking over the Roy media empire?
JESSE: We have the element to the show, which is — I don’t know who you find to be a credible contender — but if we look around the group, I think there’s lots of people coming in and out of focus. It’s not just necessarily the four kids who we see, but also there’s people like Tom — played by Matthew MacFadyen — and even sometimes Greg [Nicholas Braun], and maybe you might think about Marcy [Hiam Abbass]. So lots of key people come in and out of focus as potential successors.

So we should keep an eye on the other people in their lives, not just the family.
JESSE: Oh definitely. Definitely.

To see all the twists and turns to be revealed as the search for a successor becomes paramount, be sure to tune in for all new episodes of SUCCESSION on Sunday nights on HBO.