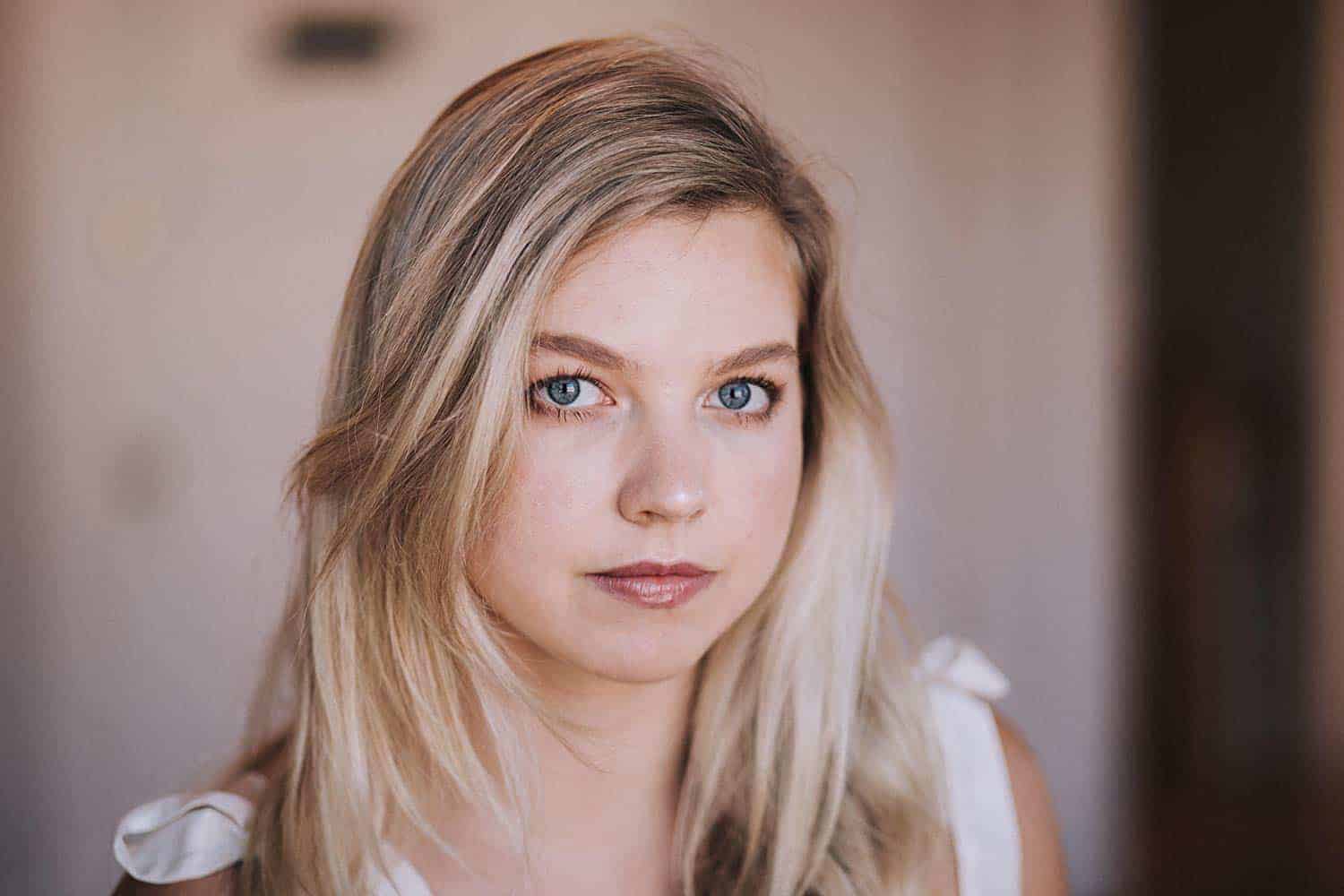 Bringing her talent and enthusiasm to the film “Running For Grace,” Olivia Ritchie simply shines. Portraying her character of Grace with poise and love, Olivia is captivating in her role. In an exclusive interview, Olivia shares what drew her to this heartfelt film and what she is learning as her career continues to grow.

What was the initial appeal for you about portraying Grace and working on “Running For Grace”?
OLIVIA: The first time I read the script, Grace was an easy character for me to feel connected to. We are the same age and I like to think have a similar personality to her. After thinking about the story as a whole, I got excited about the relevance it carries today. Even though it takes place in the 1920s, we are still having some of the same conversations and issues that appear in the story. I was also so excited about the potential opportunity to shoot a period piece in Hawaii! The locations we filmed at were absolutely breathtaking! It was such a dream!

How would you describe who Grace is in the film?
OLIVIA: Grace is the curious, soft spoken and pure hearted daughter of a wealthy plantation owner. She becomes underwhelmed and restless in her sheltered life, controlled by her father. Grace just wants to be free to grow up!

What do you most admire about Grace?
OLIVIA: I really admire her strength. She’s been through so much and in a way feels like she’s being held captive, yet still chooses to be kind and caring to everyone around her. It amazes me that she has so much courage to stand up to her family in regards to Jo.

What is it like working alongside Ryan Potter, Matt Dillon and Jim Caviezel on “Running For Grace”?
OLIVIA: It was such an amazing experience working with these actors who have such established careers. I learned so much just being on set, watching their process, and how they approach their work. Not only are they talented actors, but they are also wonderful people!! They taught me a lot about being a disciplined actor and always caring for the other actors around me, whether in a scene or just hanging out in between takes.

How would you describe the dynamic between Grace and Jo [Ryan Potter]?
OLIVIA: There’s an honest element of innocence they both have. It truly starts out as little kid crushes, then becomes an infatuation as they get older. Grace wants to experience the world, and she sees that adventurous side in Jo. They start to realize it might be more than just a crush. That’s when they have to face the obstacles of forbidden love.

Any favorite scenes that you can share from working on the film?
OLIVIA: There’s a scene in the film that all of the main characters are involved in that takes place in the Danielson’s living room. I won’t spoil it, but it was definitely one of the craziest and most fun scenes to film. All of the actors seemed to be feeding off the chaos! However, I think the most rewarding scene was the last scene I shot for the film. I knew it was going to be the most draining scene for me to shoot. I asked for a closed set, which helped me through the process. It was shot at night, in this tiny shed that could hardly fit the crew. Personally, I feel like Grace and Jo felt closest to each other in that moment.

What challenges did you face working on the film and how did you overcome them?
OLIVIA: The hardest thing for me was when we would do overnight shoots. I would get so exhausted. Coffee helps! And we got to have actual Kona coffee every time, so I can’t complain! It was also important to keep the morale up on set with the cast and crew. There was one point where it was around 4 a.m. I was getting so sleepy, so I got up and had an impromptu dance party with some other actors. Dance parties are always a good idea! You could say we made the best of those all nighters.

Has “Running For Grace” left an impression on you in your life? If so, in what way?
OLIVIA: Oh, for sure! When you’re stepping into your character’s shoes, it gives you a new outlook to all the struggles people actually deal with and the rejection a person can have due to their race. I feel like I now have more compassion and sensitivity for those who are still facing these struggles.

Then as an actor, what has been the one thing you have taken away from the experience of working on “Running For Grace”?
OLIVIA: Working on this film, has given me more confidence and has taught me so much about my craft. I learned so much about acting just by observing my cast mates work. I also got to talk and develop relationships with the crew members. This gave me a huge amount of respect for everything that goes on behind the scenes. After working on this film, I knew this is truly what I want to do with my life. I want to work together with those around me and tell stories!

What has surprised you most about your career so far?
OLIVIA: I’ve always wanted to be an actor…always. I grew up in a small town outside of Chicago where a lot of people would tell me that it wasn’t realistic. Luckily, my parents were very supportive and encouraged me to keep going. I guess I’m just very surprised and couldn’t be more thankful for the opportunities I’ve been given so far.

At this stage of your career, what do you think you have learned from the roles and projects you have worked on?
OLIVIA: Each project I’ve worked on has given me insight into how to collaborate with other artists, while also developing my own art and working on my characters. It’s so fun to feel like you’re a part of this team creating something so much bigger. Each character is always so important to me. I treat it with sensitivity and absolutely no judgement. I take a lot from what these characters teach me into my own life. I get to portray someone who might have different values or standards than me. I get to consider someone else. I get to understand and justify their thoughts. This has given me a bigger appreciation for people I meet who may have completely different backgrounds.

Then what are the perks of where you are in your career right now?
OLIVIA: I think there’s just so much excitement! I’m realizing how many stories that need to be told. As an actor, I feel like it’s the biggest blessing and responsibility to be able tell these stories!

What has been your proudest achievement as a working actor at this point in your career?
OLIVIA: Working with actors who are so established in their careers has been such an honor and I’m grateful to have worked with them! It challenged me in the best way possible.

Has there been any great advice you have gotten about working as an actor?
OLIVIA: One time another actor, who I respect, told me that its okay to be picky about roles. We’re constantly being thrown all sorts of ideas in the media. He told me that it’s okay to turn down a role if you don’t believe in the project. Stand up for yourself. It will pay off in the long run!

What advice would you offer to other upcoming and aspiring actors?
OLIVIA: As a young actor, I struggled a lot with patience. Sometimes acting and getting roles can be so frustrating and discouraging. it has helped me to focus on my craft by constantly taking classes and working with my coaches. Sometimes acting work is inconsistent and you might have a lot of downtime in between a project. Thats when I jump back into classes!

At a time when women’s voices are rising to be heard and respected around the country and world, what do you recommend your fans do to lend support in that endeavor?
OLIVIA: We all need to be be constantly encouraging and supporting each other’s successes. You don’t need to have a large platform to make a difference! We can’t make progress if we are feeling threatened by one another!

From your view point, what lessons can be gleaned from the “MeToo” era?
OLIVIA: I’m thankful that the “MeToo” movement has started a conversation. There is a demand for necessary change in the entertainment industry and every other industry as well. . I think as women, we need to be strong and vocal about these issues. We need to keep fighting for equal rights in the workplace. This problem has been identified and now we need to keep fighting for. change!!

Do you have any other upcoming projects that you can share that fans should keep an eye out for?
OLIVIA: It’s a secret! I’m super excited about a project that I’m working on in November!! The story is so different than anything I’ve worked on before. It will be announced pretty soon!