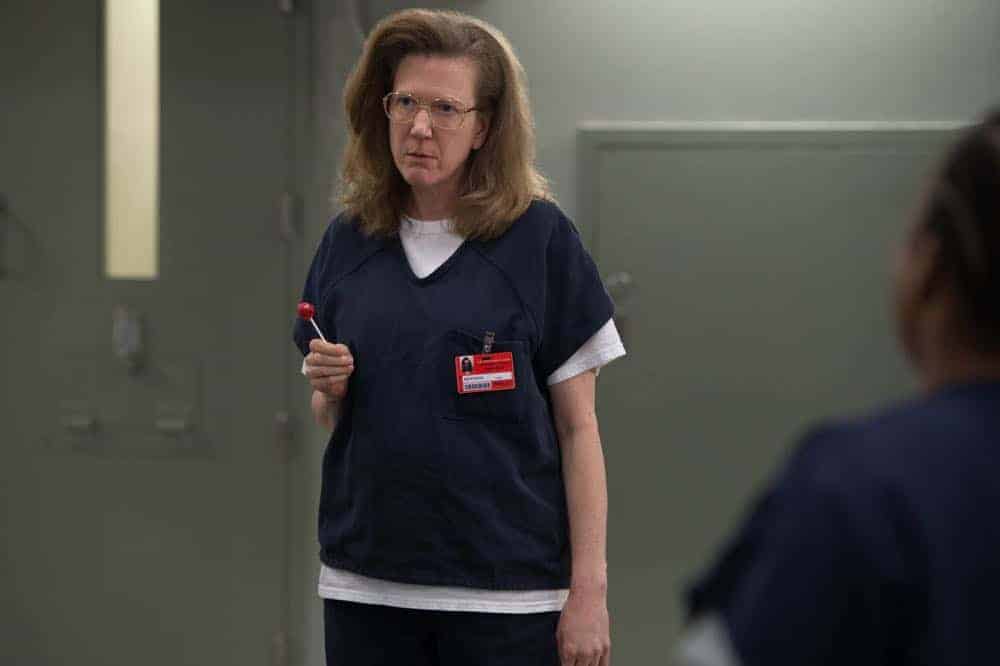 While normally found on Broadway, having worked on plays such as “Major Barbara” and the 2017 Tony award winning “Olso,” Henny Russell has been brought her immeasurable talent to Netflix’s ORANGE IS THE NEW BLACK in Season 6. This season Henny portrays Carol Denning, who along with her sister Barb (Mackenzie Phillips) tends make everyone’s lives a bit more unpleasant whenever they are around. In such a villainous role, Henny’s performance will send a shiver down your spine every time you see her on screen. Fortunately, that is all character and Henny herself is the consummate professional who is clearly enjoying a chance to portray characters that are so flawed and multi-faceted. In an exclusive interview, Henny talks about the cool opportunity to embrace such a complex character in ORANGE IS THE NEW BLACK and shares a few reflections on lessons she has learned during her career as a working actor, whether it is for Broadway or Hollywood.

What was the initial appeal for you about portraying Carol Denning and working on Netflix’s ORANGE IS THE NEW BLACK?
HENNY: I was already huge fan, so it was absolutely thrilling to work on the show with such amazing writers, directors and actors. And playing villains is SO much fun. I mean, what actor wouldn’t want to be on OITNB?

How would you describe who Carol is in the series?
HENNY: After the riot in Season 5, several of the characters are taken to Litchfield Maximum Security, so it’s a whole new world for them to adjust to and navigate. Conversely, Carol has been in Max for over 30 years. She’s become the big boss of C-Block — she rules the roost — so anyone in C-Block will have to contend with her.

What do you most admire about Carol?
HENNY: I love the character, but it’s hard to find something to admire about Carol. I admire that she learned to become a master bridge player, and that consequently, other inmates are learning how to play bridge.

What is it like working alongside such a talented ensemble on ORANGE IS THE NEW BLACK?
HENNY: It’s a dream come true. They are all extremely talented and such pros and so supportive and welcoming. And in a male-dominate field, it is refreshing to work with so many women!

How would you describe the dynamic between Carol and the inmates of Cell-Block C?
HENNY: Carol’s the big boss. She doesn’t allow anyone to get too close, but she’ll let them think they are her friends. She demands their attention and loyalty.

Any favorite scenes that you can share from working on the show?
HENNY: Oh gosh — so many. I loved shooting something that never made it into the show. When Carol and Barb [Mackezie Phillips] are in Ad Seg, Mackenzie and I were facing off across the room and they just kept the cameras rolling — no dialogue. We had an entire conversation without ever saying a word.

What challenges did you face working on the show and how did you overcome them?
HENNY: Probably my biggest challenge was nerves. I’m extremely comfortable on the Broadway stage, but I haven’t yet had my Malcolm Gladwell 10,000 hours on camera. I overcame it by concentrating on my objective in the scene, by trusting myself, trusting my fellow actors and my director, taking deep breaths, and drinking lots of water.

Has ORANGE IS THE NEW BLACK left an impression on you in your life? If so, in what way?
HENNY: Understanding that privatization of prisons is not a good idea. That we need more educational and job placement programs in our prisons, more drug rehabilitation programs and incentives, and better access to mental health treatment. I so admire Jenji Kohan for reflecting current issues in this country on the show. The first step in solving a problem is recognizing that there is a problem.

Then as an actor, what has been the one thing you haven taken away from the experience of working on ORANGE IS THE NEW BLACK?
HENNY: I can only choose one? Hmmm. I guess it would be that I want to do more television, because I loved every second of it!

What has surprised you most about your career so far?
HENNY: That I haven’t done much comedy in TV and film. I’ve done a lot of comedic roles on stage and in commercials — it’s kinda my thing. Yet the majority of my TV and film roles have been serious.

At this stage of your career, what do you think you have learned from the roles and projects you have worked on?
HENNY: I’ve been in this business a long time, so what I have learned from the roles and projects I have worked on could fill volumes. You learn from every job you do. It’s what I love about acting — one can never truly master it as there is always more to learn.

Then what are the perks of where you are in your career right now?
HENNY: Oh gosh — there are so many. I think the biggest perk is being able to choose my projects. Earlier my career I had to accept jobs that I wasn’t necessarily keen to do because I needed to keep my health insurance or I needed the income. The freedom of choice is a huge gift, and one that I don’t take ever for granted.

What has been your proudest achievement as a working actor at this point in your career?
HENNY: That I have learned to not define my self-worth by my work. When times are lean, I don’t get depressed or doubt my abilities, and when times are abundant, I don’t let it over-inflate my ego. So much of this business is out of your control, and if you measure your success by things you cannot control, therein lies madness.

Has there been any great advice you have gotten about working as an actor?
HENNY: The best lessons I’ve learned came from working with 3 of the most brilliant actresses on the planet: Judith Light, Helen Mirren, and Kate Mulgrew. By watching them up close, I learned: always be kind to everyone, be generous, be very prepared, don’t ever make them call you to the stage a second time, show appreciation to those who help you and to your fans, rehearse at full — never phone it in, and always keep your sense of humor.

What advice would you offer to other upcoming and aspiring actors?
HENNY: Know great artists of the past, not just your contemporaries; be familiar with the work of the writers and directors and actors upon whose shoulder you are standing. See live theatre. Surround yourself with positive people, as negativity is highly contagious and corrosive. Ask questions, talk less, listen more. And stop looking at yourself on your phone!

At a time when women’s voices are rising to be heard and respected around the country and world, what do you recommend your fans do to lend support in that endeavor?
HENNY: The #StartbyBelieving campaign is to encourage everyone to start by believing someone when they say they were sexually assaulted. Less than 20% of forcible rapes are ever reported. Victims will often first confide in a friend or family member, so knowing how to respond is critical, because a negative response can worsen the trauma and foster an environment where perpetrators face zero consequences for their crimes. Statistics show that rapists don’t just attack once – many re-offend, often multiple times. It’s a frightening equation: One failed response can mean additional victims. So when someone discloses sexual assault victimization to you, start by believing them, show compassion, and help them to find the help and resources they need. For more information on the Start by Believing campaign, visit: http://www.startbybelieving.org/home

Do you have any other upcoming projects that you can share that fans should keep an eye out for?
HENNY: I shot 2 independent films that are still in post-production: “Bushwick Beats,” which is a series of 6 shorts all under the backdrop of Bushwick, Brooklyn, and small part in “The Magnificent Meyersons” (starring Kate Mulgrew!). There is also a short film available to watch on Vimeo: “Drip X Drop.”

ORANGE IS THE NEW BLACK Season 6 is currently available for binge-watching exclusively on Netflix.

ORANGE IS THE NEW BLACK Season 6 – “Alex and Carol strike a deal”: