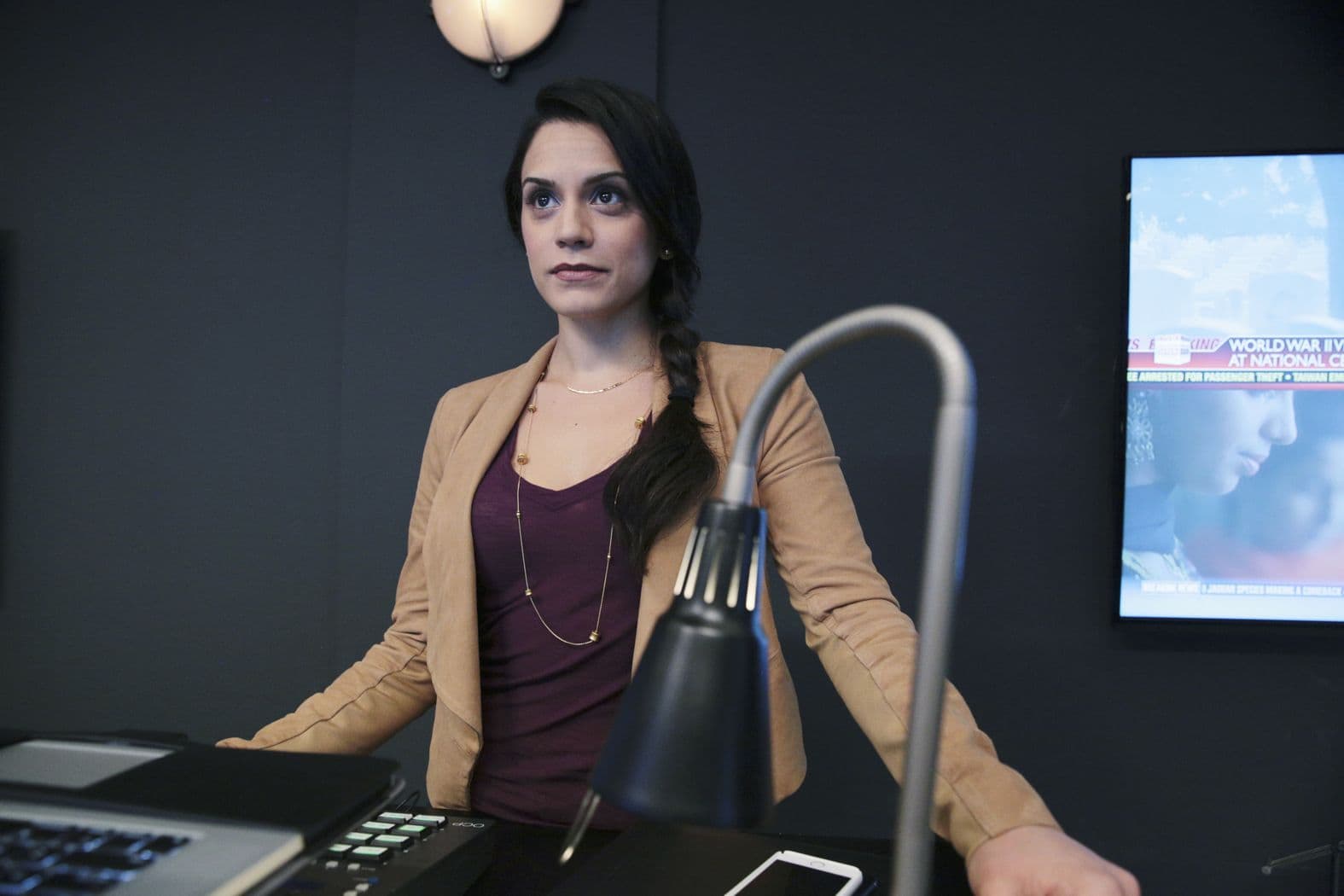 In the fast-paced world of ABC‘s new drama series NOTORIOUS, there is a fine line between reporting the news and making the news. Looking to exploit their access to broadcast news and behind-the-scenes information, a television news producer and high-powered attorney team up and spin what is reported — to give them both the best possible position in breaking news and using it to their own advantage. Starring Piper Perabo, as Julia George — the television producer with a crack news team — and Daniel Sunjata, as Jake Gregorian — the attorney willing to do whatever it takes to get favorable press for his clients — NOTORIOUS delivers just the right amount of Thursday night sizzle with a dash of scandalous shenanigans.

While attending this past summer’s Television Critics Association tour, star Sepideh Moafi talked about NOTORIOUS and who she plays in that high-stakes world.

What can you tell me about your character and why you wanted to do the role?
SEPIDEH: Oh my gosh. First of all, I read the script and I was kind of floored. Especially during pilot season, you’re reading a lot of scripts and it’s like you see a lot of the same stories come out. A lot of different variations on a similar kind of thing. But NOTORIOUS – I mean in my life I haven’t seen a story like this where they take the media and the legal system and how these two kind of work together and sometimes clash to shape the news that we get. So it was really interesting. And on top of that my character, I love. All of the characters in the show are layered, but it’s such a privilege to portray someone like Megan because it’s someone who kind of embodies the American dream really at any cost really. Getting what you want in your life and working your way up from maybe not having much to being in a position of power, especially as a woman. So she’s just very complex and as with all of the characters in the show, there’s no good or bad, innocent or evil.

And your character Megan is pretty good at digging up dirt. She’s got a unique skill set there.
SEPIDEH: Totally. She uses her “street smarts” and I could relate in many ways because it’s like you grow up and you have all these experiences and at the time you don’t know how they’re going to shape your life in the future. You just know that you’re struggling in the present. So I think with m character Megan, that’s a similar situation in that she’s got to hustle and grind for most of her life and never knowing that it can be incredibly advantageous in her profession — the profession that she’s now in. And those connections. That’s the biggest thing. This is a character based on real people in this industry — I mean, this was news to me when I first started — as “hooker bookers.” Isn’t that crazy? Because these people, at any cost, are willing to get the stories in the market that is way competitive. I had the fortune of when I first booked the show and I wanted to learn more about this world and my character and I reached out to Wendy [Walker] and Mark [Geragos] and they set me up at CNN and Good Morning America. So I got to go behind the scenes and sit in the control room and work with these real producers and shadow an executive producer, who pretty much worked her way up the ladder to have now Wendy’s job. But at the time she worked her way up from my job who is essentially the number two. Like, if anything happens to Julia, then Megan takes over. There’s a true loyalty and love and respect and devotion that Megan has for Julia. She admires her and it’s like a big sister-little sister kind of thing.

NOTORIOUS feels like a very female-empowering kind of show.
SEPIDEH: It really is. It’s so refreshing. Not only empowering, but the diversity of the cast and the kind, strong women that you see in the cast.

But they will do anything to get what they want.
SEPIDEH: [Laughs] Hey, if you’ve got it, use it, right? Why not. It is nice and it’s important, especially as an artist. I definitely feel this way. You’re always focusing on what you can improve and what needs to be better. But if you take a moment and see how far we’ve come as a people and as a world, it’s pretty remarkable. That doesn’t mean that we should settle, but just to have one moment of gratitude and then keep pushing forward. With Megan too and the show, that’s what it’s about. She always has her eye on the prize and work, work, work. You know, get the people, get the stories, get the exclusives. And that’s very relatable.

What does Megan think about the dance between Piper’s character and Daniel’s character?
SEPIDEH: I think she finds it really amusing. It’s a unique situation because these are two people who are at the top of their game in these different worlds. And the way that they’re friendship can serve their personal agenda — together so it’s like teamwork. But then also at the same time, it goes back to the idea that we’re so complex and we’re neither good nor bad. We always kind of have our own self-interest. I think Megan’s a little bit different in this way though. This might sound like a contradiction, a paradox, but she probably might be the most ethical. Yeah, crazy right? Because she is so devoted to her boss and also she can’t lie.

Do you think that would be like a second skin for her that she has that kind of inborn ethical rules?
SEPIDEH: Absolutely. And you build those ethics. You’re not necessarily born with the same morals. You evolve and you change based on your experiences and based on your mistakes. Every day we’re shaping the human that we are becoming. So it’s a privilege to be able to play somebody who’s so layered and so complex and so truly ambitious and strong and good.