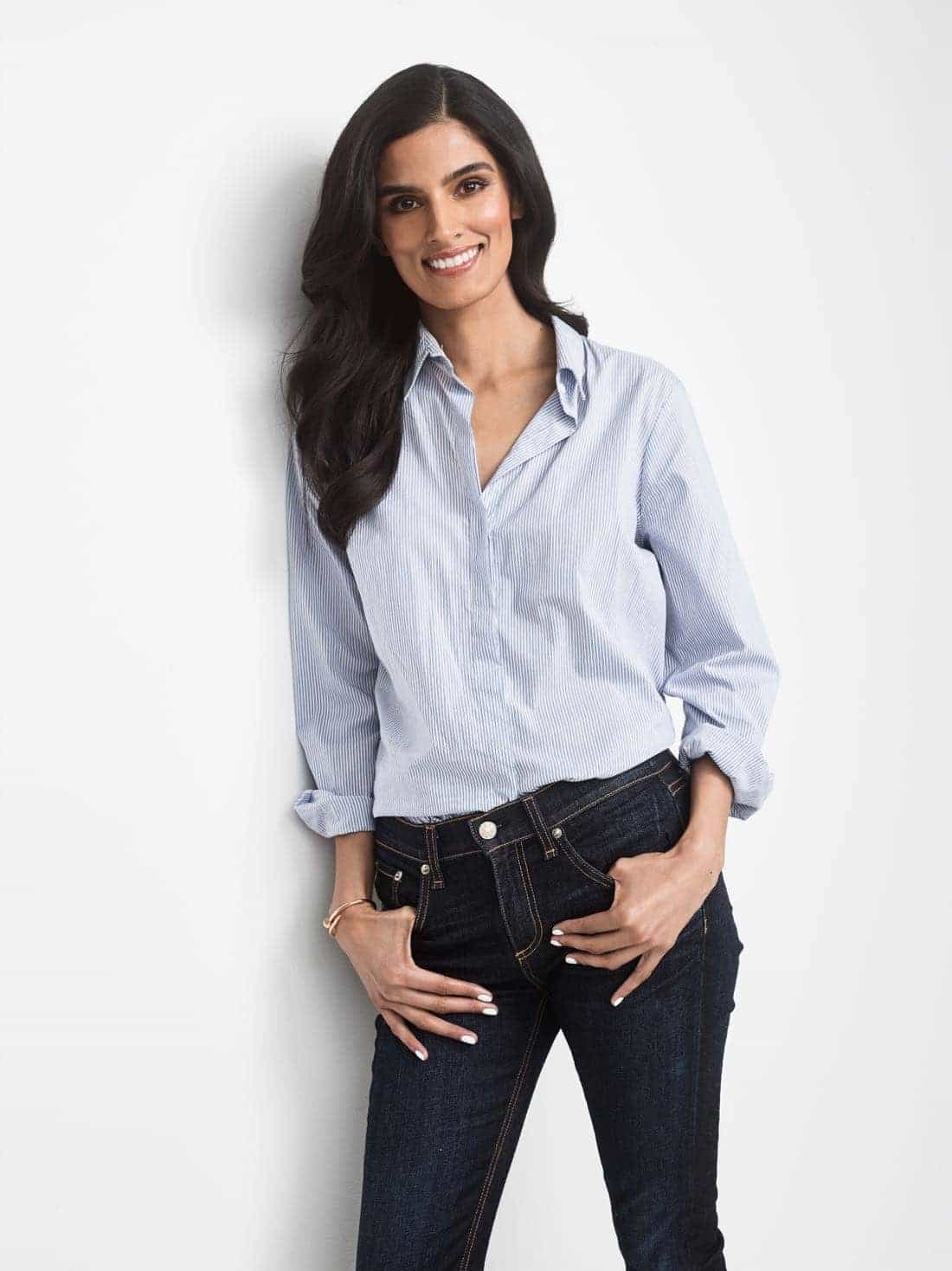 Sometime characters sneak up on us and surprise when they are suddenly thrust into the spotlight through a twist in the story.  Thus, it is with delight that Shelly Bhalla’s character Krishna stepped up and claimed a key storyline in the CW dramedy JANE THE VIRGIN this season.  In an exclusive interview Shelly talks about the fun she is having working on JANE THE VIRGIN and where she is at in her career right now.

What initially appealed to you about the role of Krishna and working on JANE THE VIRGIN?
SHELLY:  I was a huge fan of JANE THE VIRGIN and was thrilled when the audition came my way. The chance to work on such a critically acclaimed show that embraces colorblind casting and has complex, dynamic women at the forefront has been an honor.

How would you describe who Krishna is?
SHELLY:  Krishna is an intelligent, introspective, nervous go-getter who is Petra’s assistant (she replaced Scott/Vests). Before my audition, I was familiar with the tone of the show as well as Petra’s fierce character and made the decision that any interactions with Petra would be fueled by life or death type of stakes.

What do you most admire and/or like about her?
SHELLY:  I love that Krishna is a perfectionist and takes great pride in her work. I think every office has someone like Krishna, an overlooked and overworked rock of a human being that everyone relies on. In Season 3, we learn Krishna is gay and for me, it’s a privilege to play one of the few gay Indian characters on television.

What is it like working alongside such a talented ensemble, including Gina Rodriguez, Yael Grobglas, Justin Baldoni, Jaime Camil, Andrea Navedo, and Ivonne Coll?
SHELLY:  The collective talent of the ensemble is absolutely inspiring. My first scene I ever shot on JANE THE VIRGIN was with Gina Rodriguez. She greeted me with a huge hug, called me mamacita and warmly welcomed me to the show. Gina is an unstoppable force of nature and her positivity is infectious. Since Krishna works for Petra and Rafael most of my scenes are with Yael Grobglas and Justin Baldoni. They might be two of the kindest people I have ever met. Beyond their obvious talent, they really go out of their way to support fellow actors, create a loving atmosphere and make everyone feel like family.

Any favorite scenes that you can share yet?
SHELLY:  I had a blast shooting a scene with Yael Grobglas this past season where she and everyone finds out for the first time that Krishna is gay. The incredible Anna Mastro directed that episode and she gave us several takes and opportunities to play and explore the scene. Yael is one of those truly gifted and generous actors who support you 110% even when the camera isn’t on her.

What has been your favorite part about working on this project as a whole?
SHELLY:  It’s hard to name just one thing…I love being part of a show that paves the way for more diversity and representation on television. Also, the showrunner and creator, Jennie Urman, is an absolute genius. The writers are amazing. The majority of our directors are women…I could go on and on!

Then as an actor, what has been the one thing you have taken away from working on JANE THE VIRGIN so far?
SHELLY:  All the actors that I have had the honor of working with on JANE THE VIRGIN are incredibly generous and supportive. It reminds me of acting on stage in NYC and it inspires me to bring that sense of camaraderie to any project I am working on.

You have also been working on GENERAL HOSPITAL. What has that experience been like for you? Any favorite moments?
SHELLY:  I have had a great time working on GENERAL HOSPITAL. The show is cast by the legendary Mark Teschner, who is one of the most supportive casting directors I have met in LA. At my audition, we read some intense scenes and he was fully in it with me and really brought it as an actor!

At this stage of your career, what do you think you have learned from the amazing variety of roles and projects you have worked on?
SHELLY:  It’s challenging to stay confident in an industry that can often be discouraging, but I am learning that the more I trust my instincts and come from a place of authenticity the better off I am.

Then what are the perks of where you are in your career right now?
SHELLY:  Honestly, the biggest perk of where I am in my career right now is that I go to set and work consistently. There are countless, gifted actors who don’t have these opportunities. I try to remind myself every day to be grateful and enjoy it.

If there were one role you would like to revisit, which would it be and why?
SHELLY:  Stephen Adly Guirgis is my one of my favorite playwrights of all time and years ago I played Boochie in a play of his called Den of Thieves in NYC directed by the amazing Ashlie Atkinson. It was one of those roles that I was terrified of and almost turned down. I was living in Manhattan at the time and would take the train up to the Bronx and walk around and immerse myself so I could absorb the vibe of the neighborhood, learn the accent, and do research that led to discovering the character’s needs, mannerisms, quirks, etc. I loved diving deep into the role and feel there is a lot more to discover about her.

Do any of your characters and the situations they find themselves in ever leave a lasting impression on you?
SHELLY:  Absolutely. Acting is such a strange thing really and tends to attract sensitive creatures like myself. I do believe that each character has something to teach me or helps me awaken a part of myself that would otherwise be overlooked.

Has there been any great advice you have gotten?
SHELLY:  My dad always told me that passion was required for success, to always give my best to everything I do, treat everyone with respect and kindness and to breathe.

What advice would you offer to other upcoming and aspiring actors?
SHELLY:  An athlete or musician has to consistently practice to stay sharp and I am in the camp that believes an actor is no different. Hone your craft through formal training, classes, coaching, improv or whatever resonates with you and keep challenging yourself to evolve as an actor and human being.

At a time when women’s voices are rising to be heard and respected around the country and world, what do you recommend your fans do to lend support in that endeavor?
SHELLY:  I think that a lot of women are feeling disempowered and even unsafe in these turbulent times. For the feminist movement, this could be a time that solidifies us or shatters us. How we move forward is more important than ever. I wish had the answers. All I know is that we need to encourage more women to run for office and offer support when they do. It’s easy to dismiss opposing views as ignorant or archaic but we need to speak up and engage to help build bridges instead of walls. It is a delicate balance of trying to unify, but also recognizing that we need to step up and resist/fight if necessary. Like I said, I wish I had the answers!

You also seem to be actively involved with a number of charities. Which do you work with most? And which would like to see your fans become more involved with and support?
SHELLY:  I lost my dad as a teenager and am passionate about working with kids who are going through the same struggle which can be extremely isolating at a young age. This summer, I’ll be volunteering with Experience Camp in California. It is a free camp that gives kids the opportunity to navigate grief through friendship and the common bond of loss. I also work with an organization called Young Storytellers as a mentor to empower kids by finding their voice through writing.

Do you have any other upcoming projects that you can share that fans should keep an eye out for?
SHELLY:  There are some fun projects on the horizon, but I am not allowed to talk about them!

To see more of Shelly’s fun performance on JANE THE VIRGIN, all new episodes air Monday nights at 9:00 p.m. on the CW.  Then to find out more about Shelly’s upcoming projects, you can follow her on Twitter at: @shellybhalla