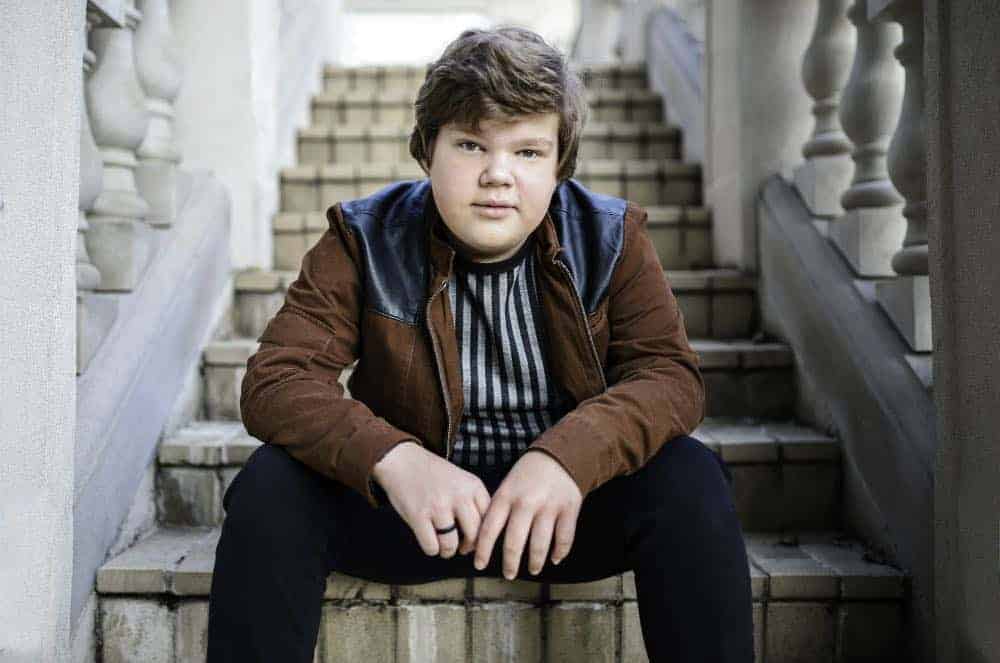 Having quite the time of his life co-starring in the films “It,” “It: Chapter 2” and the recently released “Goosebumps 2: Haunted Halloween,” Jeremy Ray Taylor is on a lucky Halloween streak. For him, getting to portray characters who are facing their fears and standing up to things that would terrify an normal person, is what being an actor is all about. Jeremy gets to face the scary things that go bump in the night and have fun in the process. In an exclusive interview, Jeremy talks about his cool role in last year’s “It” film and the upcoming sequel as well as this year’s Halloween film “Goosebumps 2: Haunted Halloween.”

What was the initial appeal for you about portraying Ben and working on the remake of Stephen King’s “It”?
JEREMY: “It” was my first major role and to be honest, that in itself was appealing. Combine that with a Stephen King project and Ben, as the kid everyone can relate to, is a big win. Being a part of the Losers’ Club was a dream come true. The true underdogs squad! I think people always see the “popular” kids as the heroes these days. So to be a part of the underdogs was pretty cool.

How would you describe who Ben is in the “It” film and its sequel “It: Chapter 2”?
JEREMY: Ben is the lovable innocent outcast that gets bullied. He hides away in the library and the world inside all those books becomes his friend. He is in LOVE with Beverly but she doesn’t love him back. At the end of the day, as long as she knows he loves her, he’s fine with her not loving him back.

What do you most admire about him?
JEREMY: I admire how Ben rolls with it. He will joke around and isn’t super serious about everything. Yet at the end of the day, he will do absolutely anything for his friends.

What is it like working alongside Sophia Lillis, Finn Wolfhard, Jaeden Lieberher, Jack Dylan Grazier on both “It” and “It: Chapter 2”?
JEREMY: Working along side all of the Losers’ Club was fantastic. We got along so well it was insane! We felt like we were lifelong friends from the first day we met.

How would you describe the dynamic between Ben and those in “The Losers Club”?
JEREMY: Ben literally stumbles into the Losers’ Club. The boys help him out, which leads them to Beverly and eventually Mike. Ben and Bill become allies over the knowledge Ben has gained from the library, which leads them to unlocking some secrets about Pennywise. They bond together because they are all misfits in some way. They all have problems and unite because of them.

Any favorite scenes that you can share from working on the two “It” films?
JEREMY: I cannot share anything from “It: Chapter 2” yet, but rest assured, it is going to blow you away! My favorite scenes from Chapter 1 have to be the bullying scenes. Those guys were incredible to work with. The basement of the library was awesome to film and super eery.

What challenges did you face working on the films and how did you overcome them?
JEREMY: The days were long and I believe it was one of the hottest summers on record in Toronto. One could say that being in your underwear for days, spending weeks running around in a stinky, flooded sewer, and getting shoved could be a bit challenging….. However, every day on set was great fun! The cast and crew was amazing and made our jobs easier, helping us out each step of the way.

Has the two “It” films left an impression on you in your life? If so, in what way?
JEREMY: These films haven’t just made an impression, they have changed my life. The people I have met have made an impact on me that I may not fully realize until I am much older. I have grown as an actor and a human being. Plus getting recognized on the streets sometimes is pretty cool.

Then as an actor, what has been the one thing you haven taken away from the experience of working on “It” and “It: Chapter 2”?
JEREMY: Andy Muschietti, the director, gave me the chance to explore my character and help develop Ben. I have learned that in a scene, I can push further than I ever knew I could. I can’t wait for new projects to see my acting develop in different ways.

You are also co-starring in the film “Goosebumps 2: Haunted Halloween”. What did you like about the character you portray in that film and what did you most appreciate about that filming experience?
JEREMY: “Goosebumps” was a fantastic experience. My character is a science nerd who loves to build gadgets and study Tesla. I really enjoyed the quick back and forth banter with my best friend Sam, played by Caleel Harris. There were a lot of different monsters and costumes that were amazing.

What has surprised you most about your career so far?
JEREMY: It surprised me how much hard work, time and dedication goes into a movie. Working 5 days a week sometimes 6, for 3 to 4 months straight is crazy. I have learned that I wouldn’t trade it for the world.

At this stage of your career, what do you think you have learned from the roles and projects you have worked on?
JEREMY: Through my characters, I have learned resilience and a better work ethic. The characters I have played aren’t so removed from myself really. I have been blessed to work on amazing projects with amazing people.

Then what are the perks of where you are in your career right now?
JEREMY: Traveling is a huge part of my career! The best perk though is meeting all the amazing people through this industry. Fans, actors, crew, all of them. I am a better person through my experiences. I truly have a blessed life. It’s amazing.

What has been your proudest achievement as a working actor at this point in your career?
JEREMY: My greatest achievement so far is knowing that we were able to meet our fans’ expectations for the “It” movie. Being a part of the highest grossing horror movie of all time is surreal.

Has there been any great advice you have gotten about working as an actor?
JEREMY: I think that I learned that rejection (In this business) should not be taken personally. And that there are lots of other kids that just have a different look than you not even a better actor all the time.

What advice would you offer to other upcoming and aspiring actors?
JEREMY: If I could give some advice, it would be to never quit after the NO. Rejection is a huge part of this business. Trust me, I have been doing this for 8 years and it took a long time to land that first big role in IT. You can’t take the rejection personally. Let it light a fire under you to be better, stronger, and more determined to achieve your task. And remember, if it was easy, everyone would do it.

Do you have any other upcoming projects that you can share that fans should keep an eye out for?
JEREMY: Let’s just say I have a few hooks in the water. But definitely keep your calendar clear for “Goosebumps 2: Haunted Halloween” coming October 12th!

To keep cup with what Jeremy is up to as his career grows, be sure to follow him on Twitter at: @JeremyRayTaylor

“It” – The Losers Club vs. Pennywise scene: