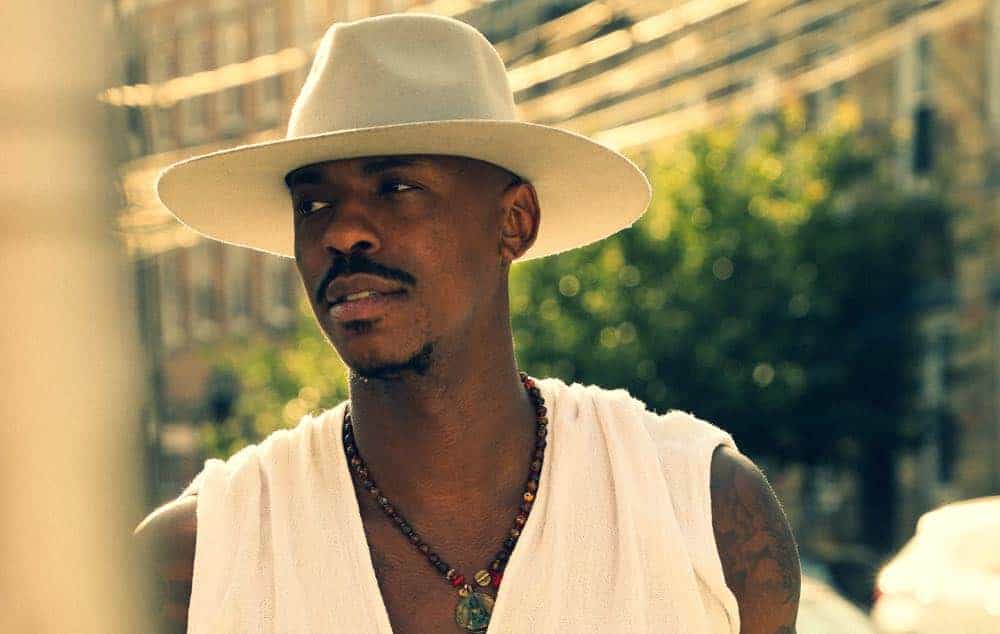 Heroes step up because we need them. In SUPERGIRL, Mehcad Brooks portrays Jimmy Olsen, a man who chooses to pursue a life fighting crime and injustice. Whether on screen or off, Mehcad strives to be an example of a man who chooses to do the right thing. Mehcad was given a second chance in his life and he seeks to make it count and he uses his art to remind viewers and fans why it is important to choose to be a hero — and that not every hero needs superpowers in order to make a difference in someone’s life. Mehcad, like his character Jimmy, simply chooses to be a hero and help where he can. In an exclusive interview, Mehcad Brooks talks about why portraying Jimmy is important to him and how his own life has shaped his career and his path forward in these challenging times.

How would you describe who Jimmy is at this point entering Season 4, especially now that he has been Guardian for a while now?
MEHCAD: The best way I can describe him is he is somewhat more like a Bruce Wayne than he is Jimmy from the comics. He runs a huge company by day and he fights crime at night.

What do you most admire about Jimmy?
MEHCAD: His dedication to the truth and his passion for justice. He’s the Barack Obama of superheroes.

How would you describe the dynamic between Jimmy and Kara (Melissa Benoit) as the show heads into Season 4?
MEHCAD: They are in a good place, their friendship has never been better. Their respect for each other is through the roof and I like that.

Then what is the dynamic between Jimmy and Lena Luther (Katie McGrath) going into Season 4?
MEHCAD: Jimmy and Lena are doing really well too. They are in love and in a great place in their relationship but as every relationship goes they have their ups and downs and maybe even things that threaten their love and trust for each other.

What have you appreciated about the Jimmy-Lena relationship?
MEHCAD: Well, her brother tried to kill Jimmy, so there is a great example for forgiveness there and although their relationship may not have started off completely honest they are at a place now of pure trust which is the highest form of respect that someone can give their partner.

Then what has been the best part about the experience of working on SUPERGIRL?
MEHCAD: The friendships I’ve made with the cast, the writers and producers and people at the studio. I feel like these relationships will last forever and I have a genuine affection and respect for so many people that I’ve met through Supergirl. That’s very rare in a town like Hollywood.

You have had a chance to do a lot of action sequences on the show. Do any stand out as favorites stunts that you got to do?
MEHCAD: I have a lot of respect for our stunt department, they do most of the heavy lifting. If you’re impressed by Guardian, I really can’t take credit for most of it. However, most of the stunts that I’ve done reminds me of being a kid in my mom’s living room jumping off the couch attacking my brothers and my cousins. I’m basically getting paid to do what I was doing when I was 5 years old.

What do you think viewers will appreciate about the upcoming fourth season?
MEHCAD: We have really stepped into the fold as a voice to counter some of the surprising rhetoric coming out of Washington and other parts of the country. Language that is harmful, divisive and frankly dangerous needs to be counter acted by an awakening in society. I feel strongly that our writers room, our cast, our producers and our executives at Warner Brothers and The CW are doing our part to let the next generation know that there is plenty of light at the end of this tunnel and a plethora of hope.

Your song “Tears Away” was featured on the show. What can you share about the inspiration for that song and what it meant to have it featured on SUPERGIRL?
MEHCAD: Song was inspired by this: we all go through things, trials that make us second guess our strength, moments that bring us to our weakest points. “Tears Away” is about that moment when your inner strength prevails and you learned the lesson of your hard ship. It’s about overcoming who you thought you were and stepping into your true strength. It meant the world to me to have it featured on SUPERGIRL! When you work so hard on your dreams and it’s being supported at that level there is nothing better.

What continues to inspire you in your music and what would you like fans to know about your music and your new album “May 20th”?
MEHCAD: May 20, 2009 I died. I passed away. I crossed over to the other side, I saw all the things that people talk about, the light, waiting through a field of thick darkness yet knowing you’re in a loving harmonious oneness with the universe. I’ve seen it, I’ve felt it. I’ve tasted it, I understand what it means to disassociate yourself from who’ve you’ve always thought you were and the body you thought was yours. And I guarantee you at the end of this beautiful journey you are going to ask yourself the same question that I asked myself. Did I do what I agreed to do before I was born? Or did I just somehow allow my life to happen to me? The answer to that question for me was music. May 20, 2011, I got hit by a car head on. She was going 65 miles p/hour, I was stopped at a stoplight. Next thing I know I was in a coma and I had a very similar experience and after I got out of that hospital I was ready to fulfill my agreement, but it took a long time to heal and May 20, 2012, I met a holy man who opened my eyes to a connection that these experiences kept reminding me of. He showed me a way to connect to that voice of oneness without having a traumatic experience invoke it. The next day I began my music career and I never looked back, so what you hear in my debut album is me fulfilling an agreement before I was born but with the benefit, the pain and the passion that comes with overcoming very unique and traumatic experiences in life. My favorite song, I’m not sure if I have one but May 20th really tells my story and I’m very happy that I was brave enough to put that out there in the world. It touches on some of the weakest moments of my life and I’m grateful to be able to share this with the world from such a position of strength and positivity.

You also appear in the upcoming film “Nobody’s Fool.” Who do you get to portray in the film and what was that experience like?
MEHCAD: I can’t say too much but let’s just say that things are not always what they seem and I play a character who may or may not prove that.
What was it like working alongside Tiffany Haddish, Omari Hardwick, and Miss Pyle? MEHCAD: It’s an honor to be on the playground with so many incredibly talented people. However, Miss Haddish is the LeBron of life. She’s impossible not to love, in fact if you don’t love her I don’t trust you and you may need to take a deeper look of who you are inside. I haven’t stopped laughing since the first day of shooting!

At this stage of your career, what do you think you have learned from the roles and projects you have worked on?
MEHCAD: At this point in my career I’ve learned a lot about patience, professionalism & having a thick skin and not taking yourself to seriously. Acting is not life. Hollywood is not the world. There is so much more to this beautiful existence. It’s thought me how to balance the immense focus this career takes with not allowing your life to pass you by.

What has surprised you most about your career so far?
MEHCAD: After 14 years in Hollywood, nothing surprises me.

What has been your proudest achievement as a working actor at this point in your career?
MEHCAD: Every time I see the face of a little kid that I know I have inspired in some way. It makes all the hard work worth it.

Has there been any great advice you have gotten about working as an actor?
MEHCAD: When I first started off I used to ask actors that I really respected if they had any advice for me. Tommy Lee Jones asked me a question. He said: What do you think an actor’s job is? And I replied: To accurately portrait the character to the best of your ability. He replied: That’s a smart answer but wrong. He went on to tell me that anybody can play a character as they see him or her. But an actor’s job is to portray a character as the director sees it. He said playing a character as the director sees it does two things, one, it really alerts you to your own growth as an actor because no matter what you’ll be performing through the instrument that is you but if you can play that tune when someone else is conducting you, that is acting. And two, it gets you rehired. If you can’t take directions you can’t act.

What advice would you offer to other upcoming and aspiring actors?
MEHCAD: It’s a marathon. It’s not a sprint. If you’re truly are doing something that you love enough to want to do for the rest of your life there is no reason to be in a hurry, learn your craft and take your time. It doesn’t matter what this fast-food, self-serving, instant gratification seeking culture says. Take your time, the art wants you to take your time.

Do you have any other upcoming projects that you can share that fans should keep an eye out for?
MEHCAD: SUPERGIRL comes out October 14th which I’m excited about. “Nobody’s Fool” comes out November 2nd and trust me you’re going to want to wear a diaper because it’s so funny! My debut album called “MAY 20TH” came out July 13th this summer, I would love for you guys to listen to it and then hit me up (@mehcadbrooks) on Instagram and let me know what you think.

To see how Guardian keeps up the good fight in Season 4, be sure to catch SUPERGIRL when it premieres on its new night Sunday, October 14th at 8:00 p.m. on the CW. For more information and sneak peeks about the show, be sure to follow it on Twitter @theCWSupergirl.

Then to keep up with Mehcad’s career and adventures, be sure to follow him on Twitter @MehcadBrooks

and on Spotify at: https://open.spotify.com/artist/0GXwM6aH3yWVLuijzhXt34?si=RgeFGVlGSiS_2IM6ZO