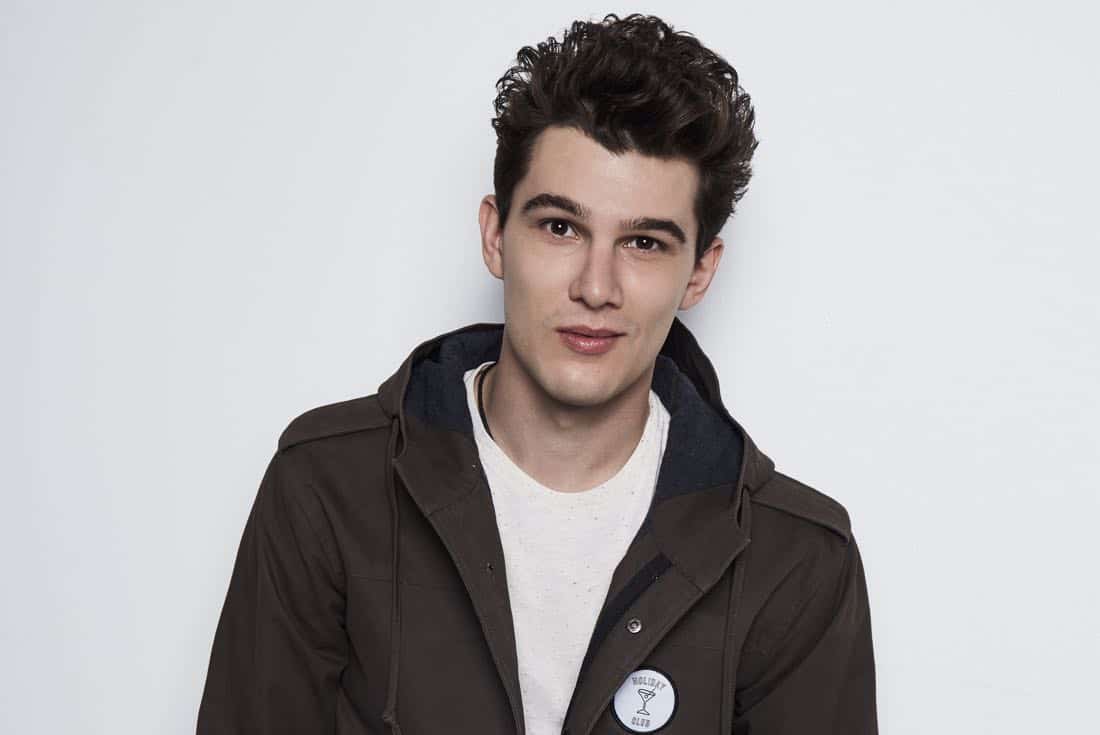 For up and coming young actor Nick Marini, getting cast in the Audience Network comedy series HIT THE ROAD (created and produced by SEINFELD star Jason Alexander) was a dream come true opportunity. It has given Nick the chance to stretch and learn and, surprisingly, have a lot of fun along the way. Reflecting on this incredible moment in his career, in an exclusive interview, Nick shared what appealed about working on HIT THE ROAD and how this remarkable experience is shaping and contributing in unexpected ways to his growing career.

What initially appealed to you about the role of Alex Swallow and working on HIT THE ROAD ?
NICK: Alex was first described to me as a stoner puppy, which I loved. I am not a musician, so the chance to challenge myself in that arena is what attracted me as well. I also got the chance to learn from Jason Alexander, which definitely helped too!

How would you describe who Alex is?
NICK: Stoner puppy was a great starting point for me. Alex is a lot of fun to play because he is an energetic positive guy. He loves his family even if they can be a lot to deal with.

What do you most admire and/or like about him?
NICK: I admire Alex’s ability to see the positive side of things, as well as his love for his family.

What is it like working alongside such a talented ensemble on HIT THE ROAD ?
NICK: It was such a blast! The whole cast is so much fun to work with, we are like our own little family. Getting to work with two pros like Jason [Alexander] and Amy [Pietz], then also have three other kids with tons of talent, made each and every day a total blast!

Who would you like to work more with on the show?
NICK: I don’t know if I can pinpoint one. They’re so many of our scenes that are with a whole family. That being said, every time I get to do a scene with just one other family member, it really is different and fun.

Any favorite scenes that you got to work on so far this season?
NICK: There is an awesome scene in episode 9 at a recording studio that I absolutely loved. Alex gets to show some other sides of himself we don’t always get to see. I also had a bunch of fun shooting for episode 4, when Alex goes off on his own and gets to experience some non-family time.

Then what is your favorite part about working on the show?
NICK: Just getting to be a part of something like this is awesome, but when you throw in the people that’s what makes it great. I really do love the people I work with, the cast and crew has made it very special. I looked forward to seeing everyone’s face every day. It was such a pleasure being hosted in Vancouver by our tremendous crew and local cast mates.

What has been the one thing you as an actor have taken away from working on HIT THE ROAD so far?
NICK: This is my first experience as a regular on a TV show. Crafting a character to stretch over a much longer timeframe than I have before was a new experience and one which I was excited for.

What is the biggest challenge working on HIT THE ROAD?
NICK: We shot a very fast schedule and sometimes would work on multiple episodes in one day. This meant that we really had to learn to trust ourselves and our director to keep us going in the right direction. I’m really glad I got thrown in to it this way though because now anything that is shot more linearly will be a walk in the park compared to our schedule!

What has been the biggest surprise working on HIT THE ROAD?
NICK: I think the biggest surprise was how quickly we all came together. It felt like the moment the family met we just fell right into it. I have so much love for our crazy cast! You always hope for an experience that is both fulfilling as a professional and as an individual. While also getting to do what I love with the people I love was a real treat!

What has surprised you most about your career to date?
NICK: My only previous TV work was as a heroin addicted victim of sex trafficking on NBC’s CHICAGO MED. Clearly the next logical step was a stoner puppy in a comedy. While also the fact that I have no musical abilities made landing HIT THE ROAD even sweeter and more surprising.

At this stage of your career, what do you think you have learned from the variety of roles you have worked on?
NICK: That you never know what opportunities are around the corner for you. I am happy that I have been able to do such diverse work, each character has really taught me about different aspects of the profession. I am very much still growing, but if I can keep getting these varies opportunities to continue learning new things than I’ll be in a great place.

Then what are the perks of where you are in your career right now?
NICK: I am in that wonderful place right now of having had some amazing experiences and hunting for the next one. For the first time in my adult life, I’m in a place where I can really focus on my career without stressing about how to make ends meet. I’m so thankful for that! I feel like I’ve finally begun climbing the ladder and now that I’ve found a grip, I have no plans to stop climbing.

Do any of your characters and the situations they find themselves in ever leave a lasting impression on you?
NICK: Definitely! The wonderful thing about being an actor is that you are exploring the human experience. Any time I get to portray someone not to be screen or stage, I am getting to experience something other than my life. I’m having to grapple with things I may not have encountered as Nick. That’s a blessing and something that can’t help, but to influence you. It can also open your eyes, for example my research for Danny Jones on CHICAGO MED made me much more aware of the epidemic of sex trafficking in the world and the U.S. I have donated to some charities who fight to help victim of sex trafficking. Getting to play Alex has opened me up to a love of music that I had never really embraced before. The fact that a part of my job as an actor is to learn more skills and empathize with more people is a major reason I love what I do.

Has there been any great advice you have gotten? What advice would you offer to other upcoming and aspiring actors?
NICK: Every “no” in an audition just gets you closer to a “yes.” Persistence is key in this business. If people knew exactly what they wanted, then you wouldn’t be in the audition room and it would have already been offered to. Just continue driving at it and one day you’ll be the perfect fit. Speaking of that, always make sure to find ways to improve your craft. If you can expand your talents then you’ve expanded the number of rolls you are a fit for.

Do you have any other upcoming projects that you can share that fans should keep an eye out for?
NICK: Nothing right now, but that’s the excitement of being an actor! The hunt continues and who knows what tomorrow will bring.

To see Nick’s fun performance as Alex, be sure to check out new episodes of HIT THE ROAD on Tuesday nights on Audience Channel, available exclusively on DirecTV.