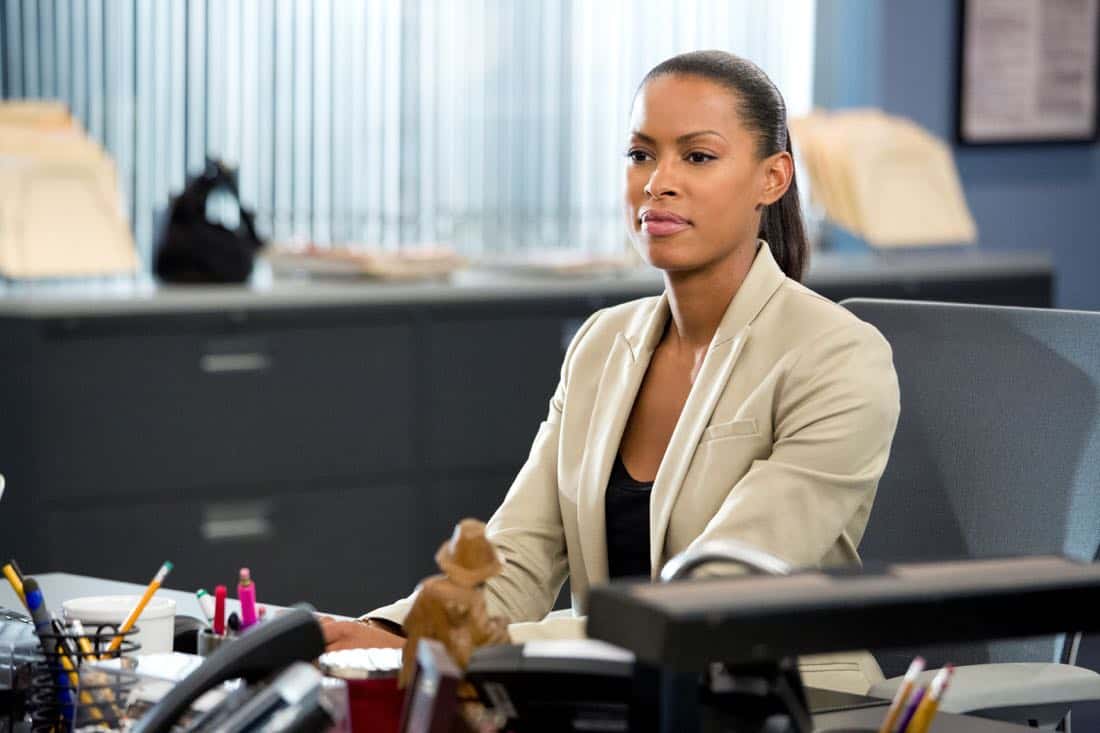 In TNT’s drama series MAJOR CRIMES, Kearran Giovanni clearly had a ball in the remarkable six season run of MAJOR CRIMES. As Detective Amy Sykes, Kearran conveyed confidence in her place on the team and seemed completely at ease in the predominantly male work environment. That assurance made her a stand-out role model and it was fantastic seeing on screen that positive representation of women working seamlessly in the police force. In an exclusive interview, Kearran talks about the amazing time she had working on MAJOR CRIMES and the powerful life lessons she learned from that experience.

What continues to be the appeal for you about portraying Amy Sykes and working on TNT’s MAJOR CRIMES?
KEARRAN: Oh, Amy Sykes. I loved playing her! The evolution she has had over the past 6 seasons has been such a journey. Starting as such a young gun, eager, people pleaser and really coming into her own as a strong member of the squad. She took risks and always worked for the greater good.

How would you describe who Amy is at this point in the series and how she has grown?
KEARRAN: Amy is super confident in her place in the squad. I think she’s also gotten close to the captain. She’s put herself out there so much in the last few seasons and the captain has always had her back. I think that came to a head last season when Mark Hickman came back. She stood her ground and the rest of the squad really prepared and protected her.

What do you most admire most about Amy?
KEARRAN: She is just so sure of herself. She doesn’t question her decisions.

What was it like working alongside the talented ensemble on MAJOR CRIMES?
KEARRAN: Oh man. It is honestly hard to put into words… they are my family. I love them all so deep. Whether it was in a scene or in life, they have been the most supportive group of people I have ever worked with. To say I’ll miss seeing them every day is an understatement. We are already planning a group trip. Also, our new family! Jessica Meraz and Daniel Di Tomasso!!! I knew how it felt to be the new guy on the block and having them join us was just the perfect fit! I LOVE THEM. Jessica is a true star…in the best sense of the word. Talented, smart, and graceful. Daniel…well he’s a total package. It was like they had been there the whole time.

What is your proudest achievement working on MAJOR CRIMES for the past 6 seasons?
KEARRAN: I would just say growth in general. This was my first series regular and I basically “faked it until I made it!” Also, doing over 100 episodes of television is a pretty huge accomplishment. I never take for granted what an achievement that is for our group!

Any favorite scenes that you can share from working on MAJOR CRIMES this season?
KEARRAN: I loved the wedding. It was such a joyous event! It honestly felt like a real wedding. We even went out for a “reception” after!

Then, as an actor, what has been the one thing you haven taken away from the experience of working on MAJOR CRIMES?
KEARRAN: (1) Camera angles. (2) Grace on a set.

You also worked on ABC’s DESIGNATED SURVIVOR. What did you enjoy about working on that show?
KEARRAN: So much fun! It was fun to play another character. Challenging to drop a character (Amy) that you play constantly and put on another “suit” also, working with Kiefer Sutherland was a dream. I had a great experience.

What did you take away from that acting experience on DESIGNATED SURVIVOR?
KEARRAN: Line preparation. There is a reason why (among many) what Kiefer [Sutherland] is just so fantastic… he can come in with literally 5 pages of dialog word perfect day after day and not miss a beat. I am a line stickler, so I really appreciated his preparation and delivery. It just showed so much respect for the craft and for your fellow actors and crew.

What has surprised you most about your career so far?
KEARRAN: I’m still constantly shocked! “People want me? To act? Are you sure?” I always think it’s a fluke…. I’m working on that.

Then what are the perks of where you are in your career right now?
KEARRAN: Perks? Right now…experience. It is a little ticket you get to take along with you for the rest of your career.

If there were one previous role you would like to revisit, which would it be and why?
KEARRAN: Hmmm…. I’d play Amy forever! There is so much more we never found out about her.

Do any of your characters and the situations they find themselves in ever leave a lasting impression on you?
KEARRAN: I’m playing a character now that is a little sassier and it definitely carries into my life on set.

Do you find any of your character’s habits manifesting in your own life? Like what?
KEARRAN: Well, I can that playing Amy made me a little more “take charge” in real life. She made my conversations a little more boisterous…my jokes a little cruder…it was fun.

Has there been any great advice you have gotten about working as an actor?
KEARRAN: Listen. Always listen….and know the entire script.

What advice would you offer to other upcoming and aspiring actors?
KEARRAN: Don’t wait to get picked… pick what you want. Only you know what you are best/comfortable with.

Are you actively involved with any charities. Which charity do you work with most? And which would like to see your fans become more involved with and support?
KEARRAN: I work with Sunshine Kids most. We have all been involved with it for years through GW Bailey. It helps children with cancer experience things they never could with a group just like them. Also, Lupus Foundation. It is near to my heart because my mother passed of the disease 6 years ago. It is a heartbreaking and complicated disease that needs more awareness.

At a time when women’s voices are rising to be heard and respected around the country and world, what do you recommend your fans do to lend support in that endeavor?
KEARRAN: Well, all I can say is: do what you feel spreads your own voice. I can’t tell anyone what that is. As a mother of two girls, I think future relies on teaching not just girls, but boys, that we are equal. It has to start there.

Do you have any other upcoming projects that you can share that fans should keep an eye out for?
KEARRAN: I’m currently in Atlanta shooting DYNASTY. Just a fun little stint! After that, just relaxing at home for the holidays!