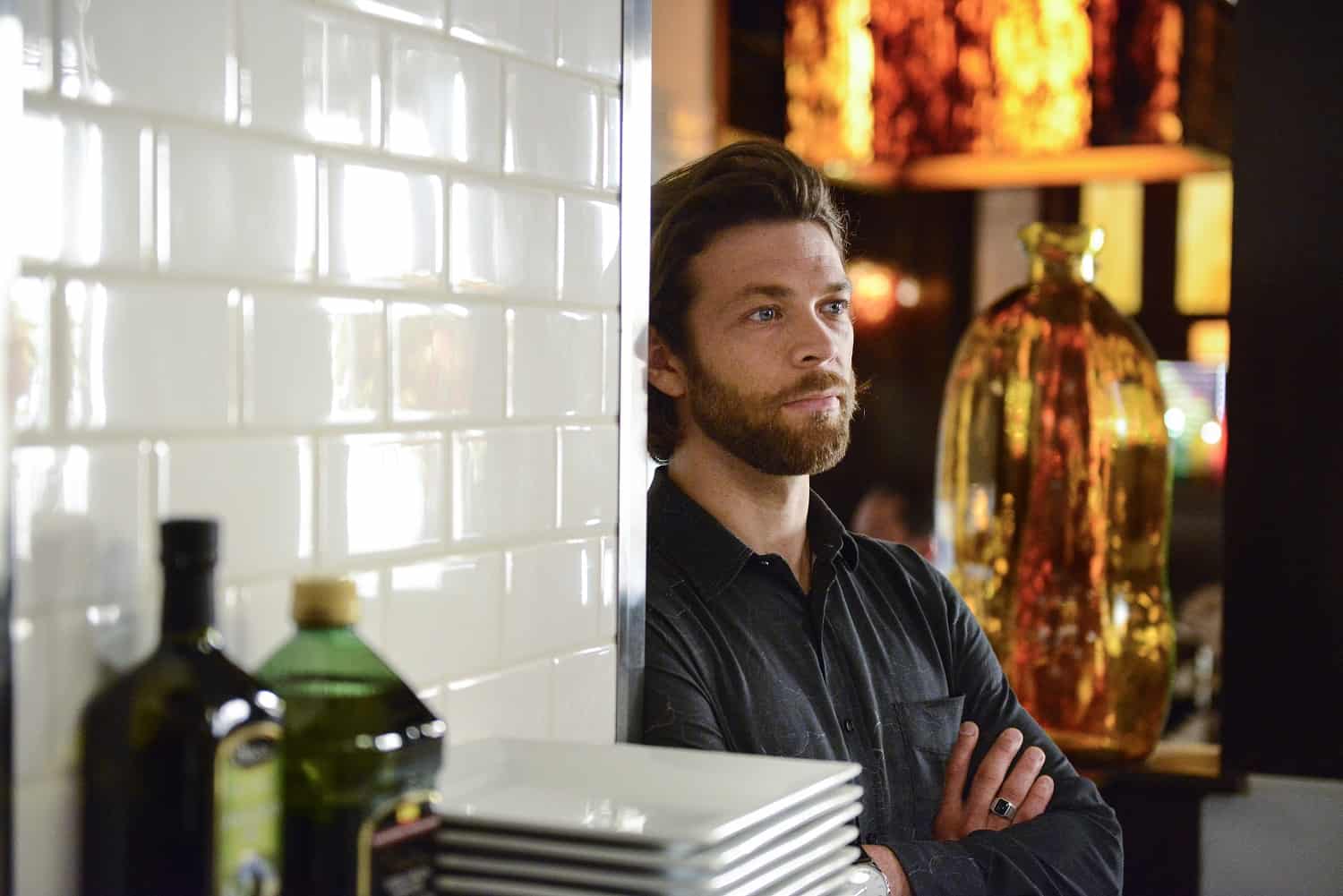 Season 2’s sinful delight on TNT’s GOOD BEHAVIOR is newcomer Juan Riedinger, who fans may recognize from the Canadian thriller series THE ROMEO SECTION or Netflix’s brooding drama NARCOS. Bringing his seductive style to GOOD BEHAVIOR, Juan Riedinger is a fantastic blend of mischievous sparkle with a hint of danger that makes his character Teo the perfect antagonist to co-star Juan Diego Botto’s character, a hitman with a heart-of-gold. In an exclusive interview, Juan Riedinger talks about how much he has enjoyed joining the GOOD BEHAVIOR world and previews his upcoming role on Fox’s LETHAL WEAPON.

What appealed to you about portraying Teo and working on TNT’s GOOD BEHAVIOR?
JUAN: I liked the challenge of playing a bilingual character and working in both Spanish and accented English. I was also excited to join an incredible group of creatives both in front of and behind the camera. I had such a great time on GOOD BEHAVIOR.

How would you describe who Teo is?
JUAN: Teo is a childhood friend of Javier’s and Ava’s from Argentina who has gotten into some pretty shady dealings. It’s pretty clear early on that his loyalties have strayed, and that he has some corrupt motivations of his own.

What do you admire most about Teo?
JUAN: I hate to say that Teo is probably not the most likable guy, but I’d say I admire his……tenacity?

What was it like working alongside the talented ensemble on GOOD BEHAVIOR?
JUAN: Most of my scenes (that we’ve seen) were with the Bottos (Juan and Maria). They’re both such talented actors and wonderful people. I also had a few good scenes with Ava’s daughters who crack me up both as characters and people. And of course, working alongside Michelle Dockery, Ann Dowd, Terry Kinney, Joey Kern and the rest of the show’s great cast was a dream come true. I’ve gotta say the casting on GOOD BEHAVIOR is spot on.

What is your proudest achievement working on GOOD BEHAVIOR?
JUAN: Working in two languages for a role was a challenge, especially when we were jumping back and forth between English and Spanish within the scenes themselves. I was a bit nervous about doing that, especially since I haven’t ever played an Argentinian, but watching the show now, I’m happy with how it turned out. Shout out to our wonderful translator and dialect coach Tamara Farias.

Any favorite scenes that you can share from working on GOOD BEHAVIOR?
JUAN: Teo’s storyline really ramps up in the second half of the season. The scenes where Javier is torturing me were very tough to shoot, but equally rewarding. We had some great directors that really encouraged us to go to a dark and authentic place. I even stopped drinking water a couple of days before shooting the torture scenes because I wanted to feel truly parched in that motel room. When Javier finally gives Teo a taste of water, it felt pretty damn good. No acting there.

What has been your favorite part about working on GOOD BEHAVIOR?
JUAN: When I got the part, I binged season one and became a big fan of the show. To get to now be a character in that world blows my mind a little bit.

What surprised you the most working on GOOD BEHAVIOR?
JUAN: My character’s storyline was a big surprise. I didn’t know too much going in, so there were definitely some shocking revelations about Teo’s actions and intentions as the season progressed. I’d get scripts about a week before shooting them, which kept me on my toes as the season went on.

Then, as an actor, what has been the one thing you have taken away from the experience of working on GOOD BEHAVIOR?
JUAN: It was just a really satisfying experience to get to work on such great material with that calibre of people.

You also worked on LETHAL WEAPON as a guest star for the upcoming episode “Wreck The Halls.” What did you enjoy about working on that show?
JUAN: LETHAL WEAPON was a blast. Getting to do big action sequences with guns, cars, and big explosions is always fun. I just did ADR for the show last week and got to watch a few scenes. It looks fantastic. And…it’s the Christmas episode!

What did you take away from that acting experience on LETHAL WEAPON?
JUAN: Since I first started acting, it’s been a dream of mine to work on a studio lot in LA. I finally got the chance to do it for LETHAL WEAPON. The experience of driving to Warner Brothers studios for work was a surreal one for me.

What has surprised you most about your career so far?
JUAN: I get bored easily. so the fact that I still love what I’m doing after all these years comes as a bit of a surprise. I guess it’s a sign I chose the right path for myself.

At this stage of your career, what do you think you have learned from the variety roles and projects you have worked on?
JUAN: I’ve learned that talent will only take a person so far in their career, but professionalism and a positive attitude are where longevity truly lies.

Then what are the perks of where you are in your career right now?
JUAN: First class flights.

If there were one previous role you would like to revisit, which would it be and why?
JUAN: I got to play a character named Gray many years ago in an indie film called “Stormy Night,” which unfortunately never really saw the light of day. Gray is basically a psychopath who starts to pick off his friends one by one the day after a halloween party. It was some extremely twisted material, and such a fun role. We basically made that film with no money, which made it next to impossible to market afterwards. It has a lot of potential. Hopefully one day we can revamp that story.

Do any of your characters and the situations they find themselves in ever leave a lasting impression on you?
JUAN: I’m sure they all do to some degree. Whenever I finish playing a role, it’s always a little sad to say goodbye to the character. The first shower I take after finishing on a show always feels like I’m washing the character down the drain. Even though I get some closure from that, I do feel like a piece of every character I’ve played has embedded itself in me on a subconscious level.

Do you find any of you character’s habits manifesting in your own life? Like what?
JUAN: Not so much the habits (that I’m aware of), but definitely their clothing. Usually my characters dress better than I do, so I try to expand my own wardrobe with my character’s clothes once I finish my run on a show.

Has there been any great advice you have gotten about working as an actor?
JUAN: My first drama teacher told me when I was starting out as an actor, that I should go out for absolutely anything I could. I took that advice to heart…working on commercials and student films and independent productions was my film school.

What advice would you offer to other upcoming and aspiring actors?
JUAN: Embrace the grind. Choosing acting as a career can be brutal at times. Just remember that for every low there is an even bigger high around the corner.

Do you have any other upcoming projects that you can share that fans should keep an eye out for?
JUAN: We’ve got a few more episodes of GOOD BEHAVIOR yet to air this season and my episode of LETHAL WEAPON airs on December 12th. I’m also about to direct another short film after many years. Very excited to get back behind the camera!

To see how Teo’s story ends this season on GOOD BEHAVIOR, be sure to tune in for the final three episodes of Season 2 on Sunday nights at 10:00 p.m. on TNT. Then also be sure to tune in for the special Christmas episode of LETHAL WEAPON on Tuesday, December 12th at 8:00 p.m. on Fox to see Juan’s memorable guest appearance amidst the usual shoot-outs and explosions with Detectives Riggs (Clayne Crawford) and Murtaugh (Damon Wayans). To follow Juan’s career and learn more about his upcoming projects, you can follow him on Twitter @JuanRiedinger