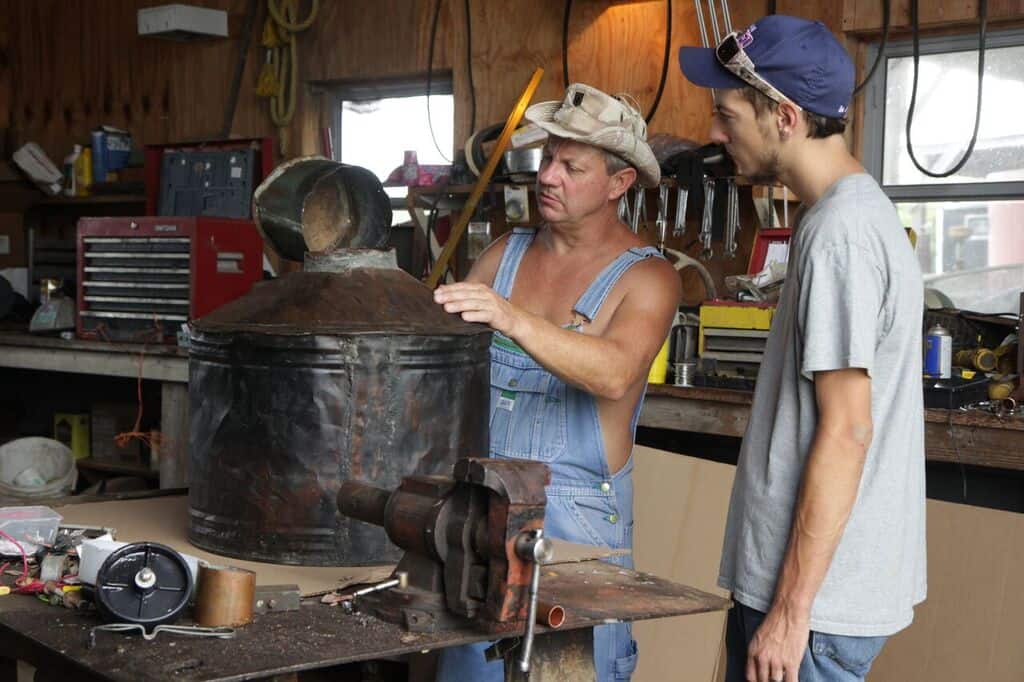 Rise and ‘shine for the all-new season of MOONSHINERS, returning to Discovery on Tuesday, November 14 at 9pm ET/PT. The battle continues! Moonshiners are back in the woods, fighting rival shiners, hiding from law enforcement and struggling against Mother Nature to keep their liquor flowing and business booming.

For the past six seasons, Moonshiners has documented the intrepid few who are willing to venture into the backwoods, outsmart law enforcement and out produce upstart rivals in order to keep the tradition of artisanal heritage whiskey alive. This season, the moonshiners take us deep into the remote corners of Appalachia to witness outrageous feats of backwoods engineering that keep their illegal distilling operations hidden. It’s a world governed by centuries-old unwritten rules where six figure deals are made on a handshake and a moonshiner is only as good as his word. Gone are the days of rotgut hooch, today’s moonshiners are masters of innovation; always pushing the envelope of ingenuity to create the finest liquor money can buy.

Veteran shiner Tim Smith continues to grow his legal distillery while trying to cement his legacy for the future Smith generation. But is Tim’s son, JT, ready to bear the weight of that legacy?  Meanwhile, Mark and Digger dive into the new season with an ambitious new triple pot still design and build. Mark Rogers and relative newcomer Mike plot an expansion that could run them dangerously close to Mark and Digger’s territory. Patti and David plan to undertake a massive marine-based distribution route into the Gulf of Mexico’s fishing, shipping and oil industries. While over in Kentucky, Chico and Sondra are at odds over the best way to maintain their success in the female-targeted moonshines and fruit brandies. Josh wants to go even bigger this year with a plan to distribute his grandfather’s recipe cherry bounce moonshine, but without big Chuck by his side, it won’t be easy. And Jeff and Lance are clawing their way back after their massive absinthe failure. Each moonshiner must rely on his wits to walk the razor’s edge—both visible to customers and hidden from the law in order to make it to the end of the season and hit the big payday.

Viewers who can’t get enough ‘shine can tune-in to the all-new MOONSHINERS series, SHINERS ON SHINE, premiering November 14 at 10pm ET/PT on Discovery. In this new series, everyone’s favorite shiners watch and debate highlights – and low lights – from the past six seasons. With colorful commentary and personal insight, series favorites take fans deeper into the hidden world of moonshine and expose the shiners’ secret code more than ever before.

Viewers can also catch the current season premiere, along with the past six seasons of MOONSHINERS on the Discovery GO app – free with their paid TV subscription.

Discovery Communications (Nasdaq: DISCA, DISCB, DISCK) satisfies curiosity and captivates superfans around the globe with a portfolio of premium nonfiction, lifestyle, sports and kids content brands including Discovery Channel, TLC, Investigation Discovery, Animal Planet, Science and Turbo/Velocity, as well as OWN: Oprah Winfrey Network in the U.S., Discovery Kids in Latin America, and Eurosport, the leading provider of locally relevant, premium sports and Home of the Olympic Games across Europe. Available in more than 220 countries and territories, Discovery’s programming reaches 3 billion cumulative viewers, who together consume 54 billion hours of Discovery content each year. Discovery’s offering extends beyond traditional TV to all screens, including TV Everywhere products such as the GO portfolio and Discovery Kids Play; over-the-top streaming services such as Eurosport Player; digital-first and social video from Group Nine Media; and virtual reality storytelling through Discovery VR. For more information, please visitwww.discoverycommunications.com.