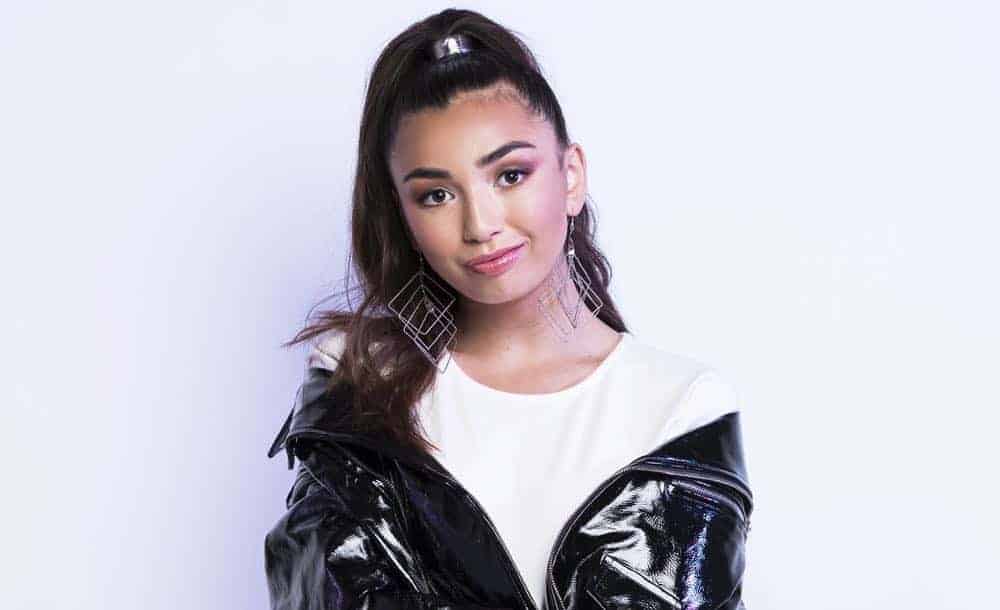 Happily embracing the opportunity to portray a character that pushes boundaries, Kelsey Leon is proud to be a part of the Brat series CHICKEN GIRLS. It is an experience that provides a rich learning experience and to have a lot of fun in the profess. In an exclusive interview, Kelsey talks about what she enjoys about her role as the mean girl in CHICKEN GIRLS and continues to learn as her career grows.

How would you describe who Kimmie is at this point in the series? Did she differ in the movie at all?
KELSEY: Based on what you know from Season 2, Kimmie is a mean girl who speaks her mind. My character didn’t necessarily differ in the movie as her attitude towards the rival dance team stayed the same until we all became Chicken Girls.

Is there anything you admire about her?
KELSEY: She does speak her mind. It’s a good thing to be honest and up front sometimes.

What is it like working alongside Annie LeBlanc, Brooke Butler, Caden Conrique, Dylan Conrique, Madison Lewis, Indiana Massara, Hayden Summerall and the rest of the amazing cast on CHICKEN GIRLS?
KELSEY: I couldn’t be more thankful to work with such a phenomenal cast. We all get along so well, and we always have so much fun on set together.

How would you describe the dynamic between Kimmie and other PowerSurge dancers?
KELSEY: Most of our character back stories are similar. You’ll get to know more about them in Season 3, which just started airing September 4.

Any favorite scenes that you can share from working on the show or the movie?
KELSEY: My favorite scene is our last dance scene in the movie where both dance teams combine together into one.

What challenges did you face working on the show and movie, and how did you overcome them?
KELSEY: I didn’t face any challenges, but if I had a challenge, it would probably just be laughing with the cast on set in the middle of a scene. We always have scenes where we have to do a stare down or look at each other, and if one of us starts laughing, it goes down hill from there. Luckily, our director this season, Nayip Ramos, is super chill and makes all of us laugh constantly.

Has CHICKEN GIRLS left an impression on you in your life? If so, in what way?
KELSEY: Most definitely. After the movie ended, most of us cried. We work on set together for so many weeks, and it goes by so fast. Once it’s over, we all miss each other so much. CHICKEN GIRLS will always have a place in my heart and it’s one of my favorite jobs I’ve worked on.

Then as an actor, what has been the one thing you haven taken away from the experience of working on CHICKEN GIRLS?
KELSEY: Probably just the set experience. It’s so essential to know what to do on set, how to be professional, be aware of the camera, memorizing your lines, etc.

What has surprised you most about your career so far?
KELSEY: When I was 12 years old, I had a dream of being a professional dancer. I did competitive dance up until the age of 14. I was debating about not doing competition anymore and moving into acting as most of my friends were on shows. That inspired me to pursue it as a career. I finally made the decision to try it and work on my craft to get a manager and an agency that can help guide my career. I won’t say I never thought I would be an actress, but it was surprising that I took a leap of faith to do something different as it takes a lot of work ethic and determination.

At this stage of your career, what do you think you have learned from the roles and projects you have worked on?
KELSEY: Definitely being on set. I love working with new cast members and directors for each project. It’s so fun because you get to bond with them and create new friends. I also love watching them act and learn new things from everyone.

Then what are the perks of where you are in your career right now?
KELSEY: Being able to do what I love with the people I care about.

What has been your proudest achievement as a working actor at this point in your career?
KELSEY: My proudest achievement is probably just getting into acting in the first place and booking a few roles in so little time. I’m blessed for each and every role and opportunity that comes to me.

Has there been any great advice you have gotten about working as an actor?
KELSEY: Keep working on your craft, and you’ll make it in this industry. It’s so important to do so as an actor.

What advice would you offer to other upcoming and aspiring actors?
KELSEY: Be yourself, and just go for it. Don’t be afraid if you mess up or you feel people are going to judge you. Be confident, and believe in yourself. If you think that way, you’ll accomplish so much more.

At a time when women’s voices are rising to be heard and respected around the country and world, what do you recommend your fans do to lend support in that endeavor?
KELSEY: Stand up for yourself. Take a stand and make a say. It’s okay to have opinions. Make yourself heard and known.

From your view point, what lessons can be gleaned from the “MeToo” era?
KELSEY: Make the world safer for women by ensuring women are free from sexual harassment, abuse, assault, and rape.

Do you have any other upcoming projects that you can share that fans should keep an eye out for?
KELSEY: Not at the moment. Season 3 of Chicken Girls just dropped. Go watch it. Season 3 of CHICKEN GIRLS is now available on the Brat’s YouTube Channel.