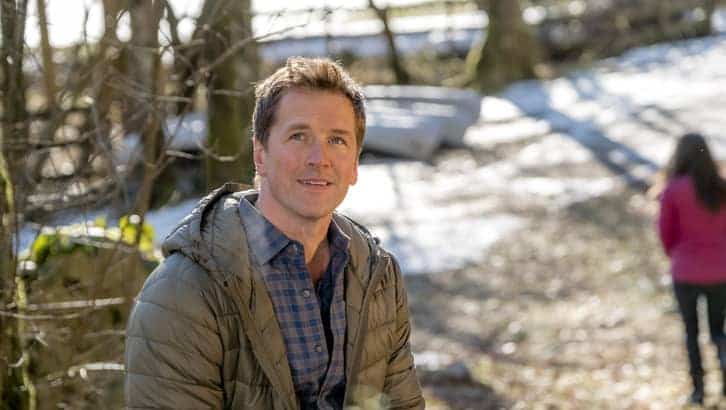 As one of Hallmark Channel’s leading men for its new year-round festival of films, Paul Greene has been making hearts swoon for quite some time. Paul has appeared in Hallmark’s “Perfect Match,” “A Christmas Detour,” “Anything For Love,” “A Wish For Christmas,” as well as the upcoming film “Campfire Kiss.” Paul also appeared in Syfy’s BITTEN series where he captured the heart of the lovely leading lady there as well and he also just made his first appearance guest-starring in Hallmark Channel’s drama series WHEN CALLS THE HEART.  In an exclusive interview, Paul talks about the appeal of his latest film “Campfire Kiss” and the joy of where his career has taken him.

What initially appealed to you about the role of Steve and working on Hallmark’s “Campfire Kiss”?
PAUL:  Working with Danica McKellar again was very appealing! We had such a great time on our first Hallmark movie together “Perfect Match,” and when Danica proposed that we work together again on “Campfire Kiss” I was in.  I also love the story.  There’s plenty I can relate to with Steve. I love camping, especially with my son. I was also intrigued by the opportunity to have my first “daughter” in a Hallmark film, actually in any film or project.

How would you describe your character Steve?
PAUL:  Steve is a risk taker, a big dreamer and committed to living his life to the fullest. He has a bit of a hard time connecting with his daughter, but is very successful and happy-go-lucky. He’s been struggling in the love department since his divorce, and has decided it’s safer to not take risks when it come to love and his heart.

What did you enjoy about portraying Steve in “Campfire Kiss”?
PAUL:  I enjoyed how fun and adventurous he was. I liked how he pushed and challenged the people around him to step outside of their comfort zones, which is honestly not too different from my own life.

What has been your favorite part about working “Campfire Kiss”?  Any favorite scenes?
PAUL:  I think my favorite part was getting the chance to work with many of the people I love. Joanne Kinchella (our dear key make up), our producers, and of course Danica [McKellar, Ali [Skovbye] and Barbara Nevin, all who I have worked with before. It’s so nice to be with the family, as you’re not able to be with your real family. Sometimes your film family becomes quite the comfort when you’re far away from home. Always grateful to work with people you know and love. There is also a scene where a bear comes in the camp and I have to scare it away.  That was really fun to play!

What has been the one thing you as an actor haven taken away from working on “Campfire Kiss”?
PAUL:  There are times when I try to memorize my lines really well, but this was one of those movies where I decided to read the script several times over. I would read through the entire script almost everyday and learned to trust in it more. I wanted to know not just what I’m saying, but why am saying it, where I’m coming from and what I want from the other person. It was quite an exercise in faith and trust, and I focused heavily on listening.

What do you hope viewers take away from watching “Campfire Kiss”?
PAUL:  I really hope that people would see that it is possible to divorce and still be loving towards one another. Also the importance of connecting with your kids and reconnecting with your heart by turning off the technology and getting out in nature. I’m a firm believer that nature helps unite oneself, and can connect you to what’s important.

“Campfire Kiss” reunites you on screen with Danica McKellar, who you previously co-starred with in Hallmark’s “Perfect Match.” What was it like working with Danica again?
PAUL:  Danica is a perfectionist, she’s probably one the most organized, prepared and intelligent people that I’ve had the privilege to work with. I’d have to say she’s the main reason I decided to do this movie. She makes me more organized and smarter.

“Campfire Kiss” also reunites you on screen with Barbara Niven who you co-starred with in “A Christmas Detour.” What was it like working with Barbara again?
PAUL:  Barbara’s the best! In between scenes I would play my guitar and sing to her. One day the song “All Along the Watchtower” came up, so I pulled out my phone and found the cords and started to play it for her. She is such a beautiful soul, such a great listener and she’s committed to making a difference in this world. I highly respect her, and what she’s committed to.

Do you usually know ahead of time that you will be working with the same talent from previous projects or is that always a happy surprise?
PAUL:  Usually you know everybody you’re going to be working with. Sometimes it’s very last-minute, but you usually are aware of your team.

What initially made you want to join the Hallmark family for your first film with them?
PAUL:  There is a terrific executive at Hallmark named Bart Fisher who had seen another series I did call  BITTEN and offered me my first role in “Perfect Match” with Danica. The director Ron Oliver also knew my costar Laura Vandervoort  from BITTEN, so it was an easy choice. Not to mention that I read the script and loved it!

What are the positive aspects of being part of the growing Hallmark family for you?
PAUL:  Hallmark is one of the rare studios out there that treats you almost like they did in the film noir days when studio would take on an actor and really take care of them like family. Back then the big studios seemed to really get behind their actors and develop together. Hallmark is very loyal, supportive and family oriented. They’ve made many efforts to help keep my family together when I’m filming. They also got behind a fundraiser I did for ALS.  They were the first to get behind me and support.

At this stage of your career, what do you think you have learned from the amazing variety of roles and projects you have worked on?
PAUL:  I think I’ve learned that I still have a lot to learn! I discovered a love for romantic comedies that I did not have before. I have learned that if the stories that we’re telling can make people smile, laugh and remind them of the good stuff, like family, forgiveness and love, then that’s a story that I’m interested in being a part of. I’ve also learned that it’s not all about me.  It’s about the team, the story, and the bigger picture, and sometimes that is as simple as making somebody smile. I feel like Hallmark movies are the medicine, the healing balm for some of the violence, hate, anger, frustration, fear and paranoia that’s going on in our world today.

Are there any cool perks of where you are in your career right now?
PAUL:  A huge perk is having the chance to work with strong amazing women like Danica McKellar, Candace Cameron, Erika Christensen, Lacey Chabert, Barbara Niven. I also love working in my home country of Canada, and playing fun, strong interesting characters.

If there were one role you would like to revisit, which would it be and why?
PAUL:  I love new things, so there’s actually no role that I would like to go back and revisit. I like to move forward. I thrive off  variety and change of scenery.

Do any of your characters and the situations they find themselves in ever leave a lasting impression on you?
PAUL:  Yes. I find this business can be quite cathartic. I have had  the opportunity to work out all kinds of deeper things with my dad, my son, my divorce and God. As an actor you get a chance to work through your own issues and that’s one of the biggest gifts there is. When you can bring yourself to the table and have compassion for the characters you get to play, and in doing so you have a chance to heal yourself.

Has there been any great advice you have gotten?
PAUL:  1. Listen.
2. It’s not about you.
3. The more  work you put in before hand, the more free and fun the moment is when you actually need to deliver is.
4. Always fall forward. (Laugh at your mistakes and keep moving forward)
5. Have a consistent morning routine.
6. Meditate.
7. Move your body everyday.
8. Remembering “EVERYTHING is in the past” and “it can’t be changed” and so “it’s perfect.”

What advice would you offer to other upcoming and aspiring actors?
PAUL:  Start young, work hard, become very skilled at handling rejection. Very few are cut out for the amount of rejection that’s involved in this business. Learning to not take anything personally, always do your best, be impeccable with your word and don’t make assumptions.

What do you consider to be one of your proudest accomplishments as a working actor?
PAUL:  Not quitting. There are times when I have felt crazy and questioned if I am delusional, but having faith and believing that I’m doing what I meant to be doing has kept me going. I’ve been on close to 600 auditions and had 570 NO’s, but the 30 YES’s are a career.

Do you have any other upcoming projects that you can share that fans should keep an eye out for?
PAUL:  I have a film coming out soon called “Sweet Home Carolina” with Heather Mccomb. Also keep an eye out for “Stay With Me.” It’s a comedy I’m doing with my Partner Katie, and “When Calls The Heart” airs every Sunday night at 9pm PST/8c on the Hallmark Channel.

To see more of Paul’s heart-warming and heart-felt work, be sure to tune in for the premiere of “Campfire Kiss” on Saturday, March 18th at 9:00 p.m.on Hallmark Channel. Then you can see him on Sunday nights in Hallmark Channel’s WHEN CALLS THE HEART. And keep an eye out for his upcoming 2017 films “Sweet Home Carolina” and “Stay With Me.”  To follow Paul’s work, follow him on social media at: