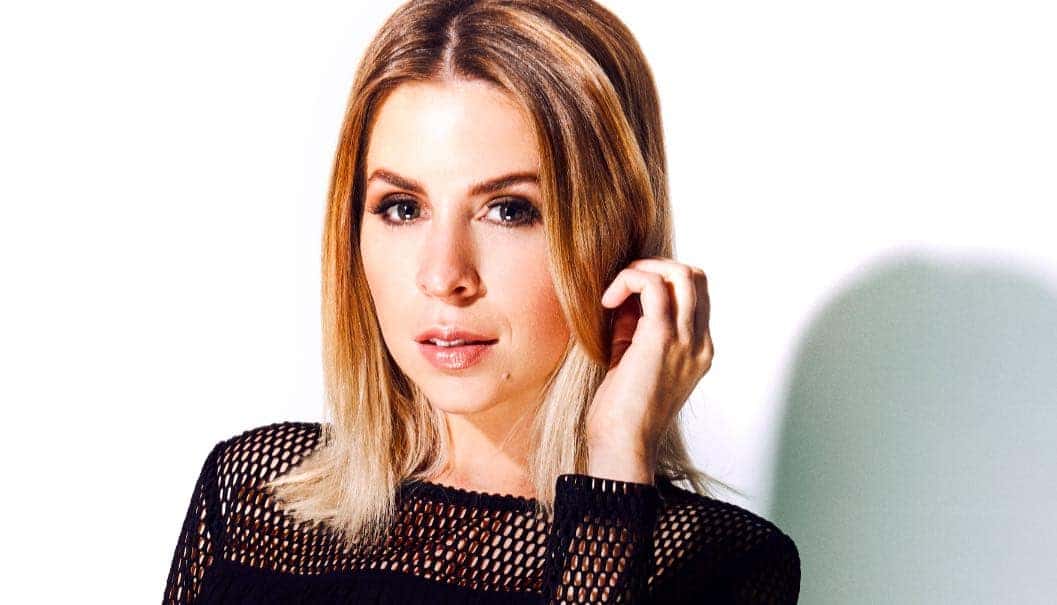 Up and coming young actress Lindsay Lamb has appeared in no less than a dozen films in the past year or so.  With a drive and eagerness to make her mark and work in some of the most challenging and rewarding roles, Lindsay’s career choices have been inspired and fun.  In the film “Apple Of My Eye,” she portrays a Braille tutor and in the upcoming “Blue Line,” she portrays a kidnapped cheerleader taken on a train heist. In an exclusive interview, Lindsay shared what is was like working on “Blue Line” and the joy of where she is at in her career right now.

What initially appealed to you about the role of Bunny Abbott and working on the film “Blue Line”?
LINDSAY:  I think what initially drew me in was the chance to work with the production team again. I had worked with them once before and had such a great experience so I was definitely excited for round 2. Once I read the script, I loved the role of Bunny so when I was offered the part it was a no-brainer.

How would you describe who Bunny is?
LINDSAY:  Confident to a fault, living in a bubble of cheerleading and getting her way.

What did you most admire and/or like about her?
LINDSAY:  In a way I admire her confidence, even though it’s obnoxious at times. It would be fun to live in that world, just for a day or even an hour, and see if any positivity could come from it. I might have to do a little social experiment and get back to you on that one!

How would you describe the part Bunny has to play in the film?
LINDSAY:  Bunny is held hostage during a pivotal point of the film. I can’t give too much away, but it’s not the first or the last time that Bunny and her loud mouth get into trouble and this time there’s a lot at stake.

How does she connect with the other characters in this heist drama?
LINDSAY:  She connects with the two females who hold her hostage through fear and her want to be safe and live through whatever is going on around her. She is completely dependent on them and her life is literally in their hands.

What is it like working with Tom Sizemore, Jordan Ladd and Nikki Moore? Was there a favorite scene working with each of them?
LINDSAY:  They were all wonderful. It was one of my first legitimate projects and I was so nervous at first but they were all extremely kind and helped me whenever I needed. I think my favorite scene is the one that we are all together during the actual heist. There were so many moving parts, not to mention a snow storm that was coming through, and everyone involved had to be so specific with timing in order for it to all work. So when we finally got it, it was awesome.

What was your favorite part about working on this project?
LINDSAY:  My favorite part was being able to watch everything come together and observe how people act when things don’t go completely as planned (i.e., a blizzard coming through mid shoot). It was a massive learning experience for me.

What do you think you have learned from portraying Bunny?
LINDSAY:  To shut my mouth every now and then, haha!

What was one thing you (as an actor) took away from working on “Blue Line”?
LINDSAY:  I learned so much, honestly. I think the number one thing that I took away from working on “Blue Line” was the amount of effort that goes into making a film and how so many people go without much acknowledgment. Our crew was amazing; they worked outrageously hard and don’t get nearly enough credit or ‘thank you’s.’ I have so much respect for everyone involved in creating a film… it is a ton of work!

At this stage of your career, what do you think you have learned from the amazing variety of roles and projects you have worked on?
LINDSAY:  I’ve learned that there is no end to the learning. Every set that I’ve been on has been so different and being able to adjust and be flexible really goes a long way. Another thing that goes a long way is to be a happy person on set. It’s a very high stress environment and I think it’s imperative to not add any additional stress or negativity to that pot.

Then what are the perks of where you are in your career right now?
LINDSAY:  Being able to finally have my family see my work. When I was first starting out, I worked on quite a few projects that never got finished. My family isn’t in the entertainment industry so it’s hard to explain to them that they’ll probably never see something that I worked on. It’s nice that now I can tell them that I have a film in RedBox or at Target or wherever. It’s also great that I’ve been able to chat with young women about working in the entertainment world. I have girls reach out to me with questions on Instagram after seeing one of my films and I love being able to help in any way that I can.

If there was one role you would like to revisit, which would it be and why?
LINDSAY:  I love Sam Shepard’s “Fool For Love”. I worked on it for a while in a class that I was in and would love to revisit it… maybe even put it on film one of these days. I’m obsessed with anything Sam Shepard. His character ‘May’ is so different than me and it was so inspiring to be able to work on such an amazing play.

Has there been any great advice you have gotten?  What advice would you offer to other upcoming and aspiring actors?
LINDSAY:  Keep going! Obviously there are days where that’s easier said than done, but if being in this industry is something that your heart is completely set on, 110%, no questions asked, then never give up on your dreams.

Do you have any other upcoming projects that you can share that fans should keep an eye out for?
LINDSAY:  I’m in a series called “Break Room” that I’m really excited for. It’s produced by Meg LeFauve (writer of The Good Dinosaur and Inside Out) and directed by Joe Forte. It’s going to be hilarious so definitely keep an eye out for that!

At a time when women’s voices are rising to be heard and respected around the country and world, what do you recommend your fans do to lend support in that endeavor?
LINDSAY:  I think the biggest thing to do first off is to make sure that you’re properly educated on everything that’s going on… which sounds daunting but it’s so, so important. Just because a quote or statistic is made into a meme and shared on social media doesn’t make it true. Check sources and facts before reposting an article with a catchy title. As much as I believe in speaking out, not everyone wants to and that’s okay, but there’s no excuse to not know what is going on in our world right now. If you do want to speak out to support, then yes! Let’s do it! Talk to your friends and family. Make your voices heard!

To see Lindsay’s fun performance in “Blue Line,” be sure to catch the film when it is released in theaters on March 17, 2017 by Lionsgate.