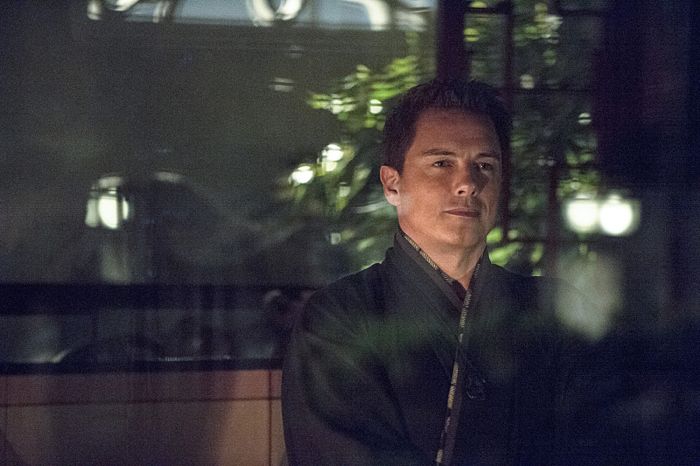 Perhaps one of the most complicated relationships on ARROW is the one between Malcolm Merlyn (John Barrowman) and Oliver Queen (Stephen Amell) — the Dark Archer versus the Green Arrow.  In Season 1, Malcolm could not resist unmasking the new archer in town, and to his surprise and delight, he found out that the Arrow was Oliver — and from that point forward, Malcolm thought of Oliver as a long-lost surrogate son.  He was alternately proud of Oliver’s abilities and angry and vengeful when Oliver interfered with his personal agenda and plans.  It led to the epic showdown in the Season 1 finale, where Oliver deliberately chose to let Malcolm live — a decision that Oliver undoubtedly still regrets — and so began the dark and twisted dance between Oliver Queen and Malcolm Merlyn.

In Season 2, Malcolm Merlyn rose from his alleged death in the Season 1 finale, and newly resurrected, proceed to uncover a dastardly secret that Moira Queen (Susanna Thompson) had fought to keep hidden:  Thea Queen (Willa Holland) was Malcolm’s biological daughter.  Unable to resist the lure of having another child of his flesh and blood, Malcolm approached Thea and made her an offer to join him if she wanted to know the truth.  Thea, frustrated by the secrets and lies of the Queen family, accepted Malcolm’s offer and began training under him in the dark arts Malcolm learned from the League of Assassins.

In an exclusive interview, star John Barrowman talked about Malcolm’s complex relationships with both Thea and Oliver Queen, as well as teased just what Malcolm may be up to this time — as Malcolm always has a diabolical plan up his sleeve.

We’ve been forewarned that Malcolm is headed back to Starling City.  What is going through his mind as he returns?
JOHN:  I can’t tell you why he is going there, but he has very important business.  He is going to be watching out for some people, but also trying to avoid other people while still trying to get his way and manipulate the people he needs to manipulate in order to get his objective in Starling City.  So although it is being dubbed as he is just coming back to Starling City for this next episode, there is a bigger and greater reason as to why he is there.

Is Malcolm worried that Oliver will get between him and Thea at this point, or is Malcolm confident in his relationship with Thea?
JOHN:  You need to keep watching because you are going to see Malcolm do something that he has never done before with Oliver.  That’s all I’m going to say.  You are then not going to know: is he manipulating this situation or is he actually meaning what he is saying or doing.  That is going to be how he will protect his relationship with Thea.

For a second there, I thought you might say there was going to be a shower scene with Oliver and Malcolm, when you said we’re going to see Malcolm do something we have never seen before with Oliver.
JOHN:  (Laughs)  A shower scene?!

You are always hinting at more intimate scenes between Oliver and Malcolm.  It could be possible.
JOHN:  (Laughs) As much as I would love to do a shower scene with Stephen [Amell], I doubt that can happen.

So whatever they are doing that may cause them to interact together, it will not involve a shower scene.
JOHN:  (Laughing)  It will not be. No, to my disappointment, and to Stephen’s “thank goodness!”

What about that costume though?  It’s got to be a bit much to wear at times.
JOHN:  I’ll say this, we have modified it.  You won’t see much difference, but we have broken it down a bit structurally because it was about four layers before of heavy material.  Now what we’ve done is cut the shirt up so it is only the collar of the turtle-neck and then the jacket is just a half-jacket with no sleeves and then the leather one is on top.  So we have modified it so it is more comfortable for me to wear and less claustrophobic.  We also opened up what I call the mask of it and, when I do scenes now, you know I’m the Dark Archer.  We can have the hood down and the mask off during my dialogue, which is good.

That sounds like we are going to be seeing the Dark Archer soon.  I’m very excited about that.
JOHN:  Don’t you worry, he’s going to be back.

With all that training that Malcolm put Thea through during all those months she was away, Malcolm seems to have never let on that her brother is the Arrow.  What’s going on there?  Why doesn’t he want to use that card yet?
JOHN:  (Laughs) Because we’re only mid-season and we need to wait.  I don’t know if that card is ever going to be played.  Malcolm is a good poker player and this a poker game.  Malcolm is not going to play all of his cards at once.  At this point and time, he is keeping that to himself — who Oliver is — because it is in his best interests.

In light of the fact that Malcolm didn’t tell Thea about her brother, how honest is Malcolm being with Thea?
JOHN:  That’s the thing: everyone has secrets, which is what Malcolm is about to tell Thea. That we don’t need to know everything.  One should still have their secrets and their bit of privacy.  So I don’t think Malcolm feels the need to tell her everything. But he is totally honest with her — with what he does tell her.  He is very careful about what he says because he knows how heavily words weigh on people. He is a very smart man.

Another thing to consider is Malcolm’s mental stability.  He has lost his wife, he’s lost Tommy.  If he were to lose Thea, would that just push him over the edge or does he have better control over that?
JOHN:  Hypothetically, if that were to happen — and I’m not saying that it is — he would not lose his mind.  He would be more focused and more in control.  Every time he loses somebody, he is more determined to avenge or get back at the people that caused it to happen.  Malcolm is not a loose canon.  Malcolm is a very focused when shit goes wrong.  So it would just make him more determined.  But he is going to do everything in his power to keep Thea safe.

So what should we look forward to with regard to what is up with Malcolm?
JOHN:  What you should look forward to is Malcolm is going to deal with a situation in a way that he has never dealt with it before, which people are going to go, “Oh my god, I can’t believe he just did that!”  You might see that a few times.  But whether that is truth or whether that is for manipulation purposes, we do not yet know.

To see just what Malcolm has planned for Oliver and his new potential weapon, Thea, be sure to tune in for an all new episode of ARROW on Wednesday, October 29th at 8:00 p.m. on the CW — for surely Malcolm is going to invite Oliver to dance again in their deadly game.