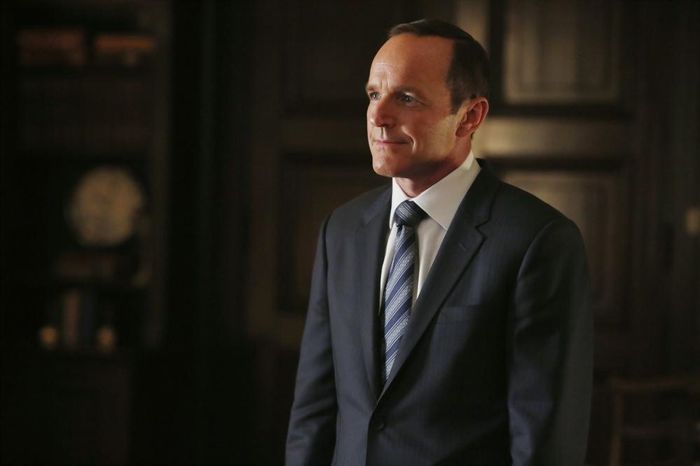 This week’s MARVELS AGENTS OF S.H.I.E.L.D. on ABC runs the gamut of emotion and alliances. The episode, “A Fractured House,” begins with the U.S. government declaring war on S.H.I.E.L.D. after an attack on the U.N., executed by Hydra agents pretending to be S.H.I.E.L.D. Our heroes scramble to clear their names and protect their people. By the end of the hour, though, Coulson (Clark Gregg) strikes a deal with Senator Christian Ward (Tim DeKay, White Collar) that should end their need to hide, unofficially sanctioned once more.

The relationship between Christian and his younger brother, Grant Ward (Brett Dalton), has been touched upon on the show before. Grant talks of Christian as a manipulative bully, forcing Grant to cause pain for their youngest sibling. Christian says Grant is the king of liars, and nothing coming out of the double agent’s mouth can be believed. Who should we trust?

“A Fractured House” does a terrific job of setting up the complex Ward dynamic without revealing too much. We see Grant and Christian talking simultaneously, both telling their side of the story, but their narrations do not match up. The show doesn’t let us know who to believe, though. My inclination is to trust Grant because, despite being evil and insane, he is very insistent that he only speaks the truth, and we’ve known him longer. But Christian is a respected U.S. senator, never having worked for terrorist that we know of, who seems reasonable, even if there’s something in his face that feels off. It’s nearly impossible to know which brother we should be rooting for.

I think it will be very telling when we see how Christian reacts to Grant’s escape at the end of the hour. Christian could come down hard on Coulson, claiming Coulson never delivered the prisoner, thus their deal is void. If he does, that makes him more circumspect, putting personal feelings before what’s best for the country. If he continues to work with S.H.I.E.L.D., helping them hunt down and recapture Ward, then he’s probably a good guy.

I really want the deal to work. S.H.I.E.L.D. has not been in hiding that long and they seem to be able to stay ahead of the game easily enough, but it’s still frustrating. When Christian publicly renounces Hydra, simply saying S.H.I.E.L.D. no longer exists, he’s giving tantamount approval for their continued operations. It’s extremely satisfying to see the group and their hunter, Talbot (Adrian Pasdar), on good terms, and they will certainly be able to accomplish more together than apart. It’s been hard to watch characters we love butting heads with people who should on the right side.

Part of this conflict in MARVEL’S AGENTS OF S.H.I.E.L.D. exposes new villains in the espionage game. S.H.I.E.L.D. agents are lured to a safe house, which ends up being a trap ripe for slaughter. The way the drama unfolds keeps one guessing, never quite knowing what’s going on or who might turn out to be untrustworthy next. That’s a good thing for the viewer, making the show one that begs the audience to pay attention.

At the safe house, we get some really kick-ass combat from May (Ming-Na Wen), Hunter (Nick Blood), and Bobbi, a.k.a. Mockingbird (Adrianne Palicki). As enjoyable as that is, though, I am much more drawn into the relationship between Hunter and Bobbi, which is dealt with during the fight scenes. Hunter backs off from his “she’s an evil witch” stance, signaling he’s probably more hurt than angry with her. Bobbi, on the other hand, is very forgiving. We see why they once worked and why they don’t now, but it seems like there could be a nice balance struck, should she stick around. I hope she does. Not only is she awesome, but their dynamic is entertaining and different than anyone else’s on the show.

The other couple featured in “A Fractured House” is Simmons (Elizabeth Henstridge) and Fitz (Iain De Caestecker). She wants to be there for him, but doesn’t know how, he seemingly getting worse when she’s around. It’s a complex bond, one that can’t be easily sorted out, and while it’s natural to root for them to be together, it’s much more compelling to see them struggle like this, at least for now.

“A Fractured House” is full of great moments, from Ward unbalancing Skye (Chloe Bennet), to Skye tricking Ward, to Ward’s walk of shame out of the base complete with a death threat from Simmons, to May bantering with Hunter in the field, to the intense conversation between Coulson and Christian. A lot happens in the narrative structure, but not at the expense of the characters. MARVEL’S AGENTS OF S.H.I.E.L.D. seems to have found an excellent balance between moving scenes and scenes that move.