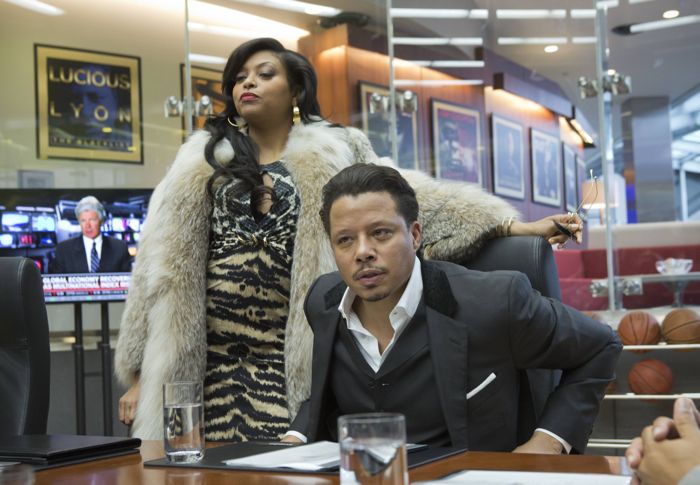 Do you like the idea of ABC’s Nashville, but aren’t a fan of country music? If so, FOX’s EMPIRE, premiering this week, might just be for you. A similar structure, a soap opera-style drama set in the music scene, with natural performances interspersed but no spontaneous bursting into song, is the format. EMPIRE goes for the hip-hop world, though, and keeps the plot more concentrated with a five-member family at its heart.

Lucious Lyon (Terrence Howard, Law & Order: LA, Iron Man) is a former criminal, now the head of a major record label that he plans to take public. He’s also secretly dying, so he begins looking to his three sons to figure out who to groom as his successor. There’s Andre (Trai Byers, Selma), the businessman married to a white woman, who seems the natural choice, but Lucious thinks the company might need a more artistic figurehead. Hakeem (newcomer Bryshere Gray) is going to be a big music star, so he might give Andre some competition. The dark horse in the race is Jamal (Jussie Smollett, On Our Own, The Mighty Ducks), who is musically talented, but uninterested in the spotlight, and, much to his father’s disappointment, gay.

Of course, EMPIRE needs plenty of drama, not just a singular through-line, so enter Cookie Lyon (Taraji P. Henson, Person of Interest, The Curious Case of Benjamin Button). Ex-wife of Lucious, she helped found the company before spending the past decade-plus behind bars, likely for something they were both connected to. She re-enters the scene determined to win her rightful place in the EMPIRE (sic), and thinks Jamal is the way to do it, positioning the middle child against his younger brother, Hakeem.

There are multiple layers to every character, albeit not necessarily interesting ones. We see much of Lucious’s shame concerning Jamal in flashback, but Cookie may not be as accepting as she pretends to be, with selfish motives only for now in line with her motherly instincts. The boys don’t want to fight amongst themselves, but it’s easy to pick at old battles and reignite them. Andre’s wife, Rhonda (Kaitlin Doubleday, Catch Me If You Can), smells money and power and wants both. Cookie feels jilted since Lucious has moved on with Anika Gibbons (Grace Gealey). An old business partner (Malik Yoba, Alphas) may find his loyalty shifting.

It’s convoluted and cheesy. EMPIRE presents the glitz and glamor of the record industry as it once was (before its current downslide), while also keeping the thug life alive, and allowing the grittiness of the characters’ pasts to come to the forefront. Unfortunately, it doesn’t do any of this all that well, feeling like a repeat of so many other efforts, paling by comparison, and even sticking the always-wonderful Gabourey Sidibe (Precious, The Big C) in a recurring role doesn’t save it.

For me, part of the turn-off is this particular style of music, which isn’t my favorite (yes, I know that’s going to earn me some mean-spirited comments, but it’s true). However, a bigger disappointment is the lack of character development and thin story, which are also the reasons I stopped watching Nashville.

There is an argument to be made that African Americans deserve more representation on television, and that’s a valid point. But they also deserve better fare than EMPIRE, very much a black copy of an existing white show. If one wants to delve into subject matter like this, I wish a stronger voice shone through. Or you can just watch Starz’s Survivor’s Remorse, which contains many of the same themes and is a far superior program, smartly written. For music in this genre, well, this is your only real option on the small screen right now, so maybe you’ll want to watch this.