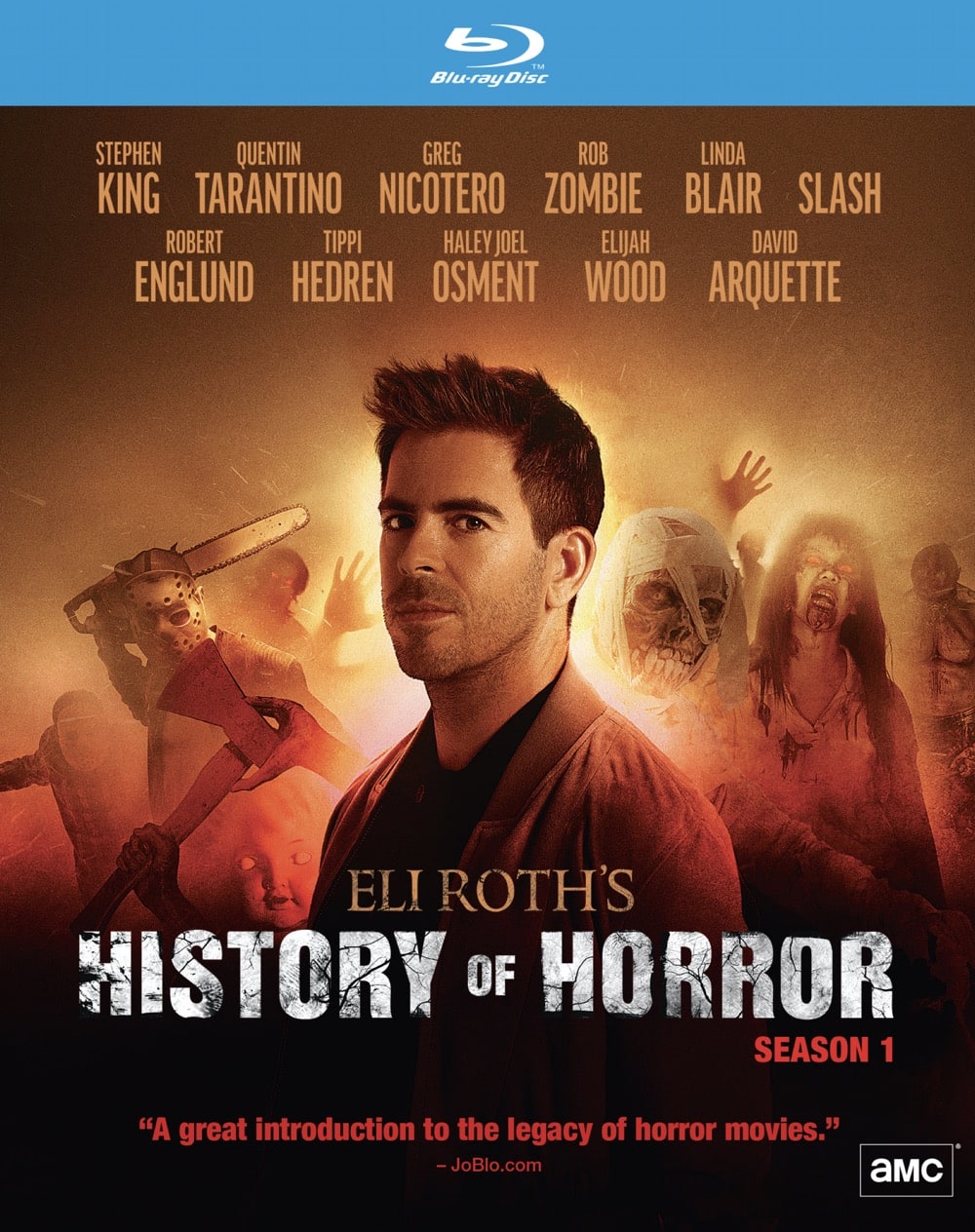 RLJE Films, a business unit of AMC Networks, will release the documentary/horror series ELI ROTH’S HISTORY OF HORROR SEASON 1 on October 6, 2020 on DVD and Blu-ray. The series originally aired on AMC Networks in 2018 as part of the AMC Visionaries series.

The documentary is directed by Award-winning horror film director Eli Roth (Cabin Fever, The Green Inferno) and written by Kurt Sayenga (“Breakthrough”, “Origins: The Journey of Humankind”), and features interviews with the who’s who of horror movies and television, including Author Stephen King (“Creepshow”, “The Shining”), Quentin Tarantino (Once Upon a Time… In Hollywood, Kill Bill franchise), Greg Nicotero (“The Walking Dead”, “Watchmen”), Rob Zombie (House of 1000 Corpses, Guardians of the Galaxy, ), Linda Blair (The Exorcist), Slash (Guns N’ Roses), Robert Englund (A Nightmare on Elm Street), Tippi Hedren (The Birds, Marnie), Haley Joel Osment (The Sixth Sense), Elijah Wood (The Lord of the Rings trilogy), and David Arquette (Scream franchise). RLJE Films will release ELI ROTH’S HISTORY OF HORROR SEASON 1 on DVD for an SRP of $34.97 and Blu-ray for an SRP of $39.98.

Award-winning horror film director, writer, producer and actor Eli Roth brings together the masters of horror – the storytellers and stars who define the genre – to explore its biggest themes and reveal the inspirations and struggles behind its past and present. Each one-hour episode will take viewers on a chilling exploration of how horror has evolved through the years and examine the genre’s impact on society as well as delving into how horror maintains its fan base and why audiences are addicted to fear. Interviewees include Stephen King, Quentin Tarantino, Linda Blair and many others.

ABOUT AMC NETWORKS
Known for its groundbreaking and celebrated original content, AMC Networks is the company behind the award-winning brands AMC, BBC AMERICA, IFC, SundanceTV, WE tv, and IFC Films. Its diverse line-up of popular and critically acclaimed series and independent films include Killing Eve, Better Call Saul and The Walking Dead, which has been the #1 show on basic cable television for nine consecutive years, as well as Portlandia, Brockmire, Love After Lockup, and the films Boyhood, Death of Stalin, and many more. Its original series Mad Men and Breaking Bad are widely recognized as being among the most influential and acclaimed shows in the history of TV. The Company also operates AMC Studios, its production business; AMC Networks International, its international programming business; the subscription streaming services Shudder, Sundance Now; Acorn TV; and UMC (Urban Movie Channel); and Levity Entertainment Group, the Company’s production services and comedy venues business. For more information, visit http://www.amcnetworks.com.