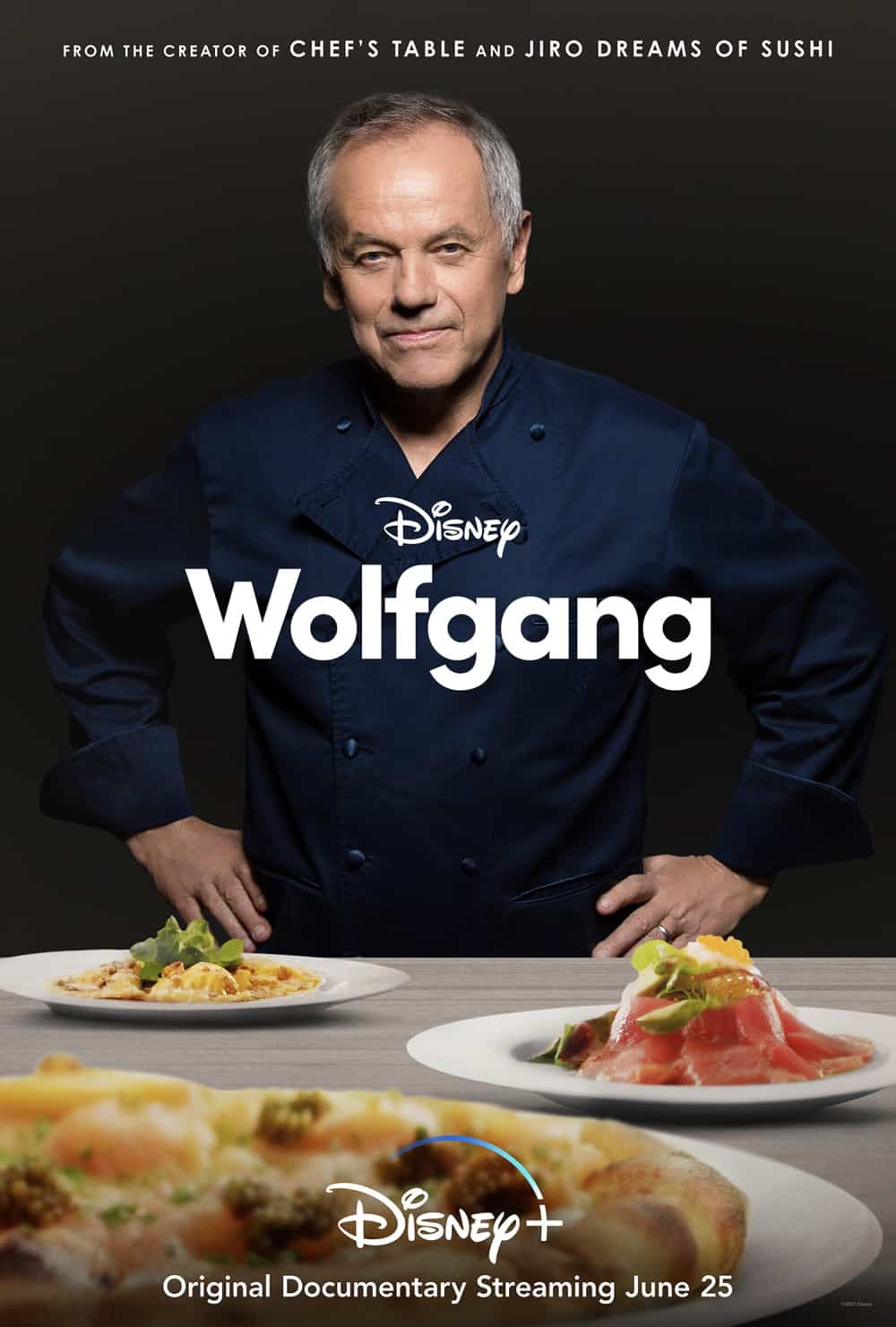 Legendary chef Wolfgang Puck will lift the curtain for the first time and reveal his incredible and emotional true-life story in “Wolfgang,” premiering on Disney+ on Friday, June 25. The documentary film chronicles the inspiring true story of Wolfgang Puck, a man who survived a troubled childhood filled with a series of challenging obstacles and whose perseverance led him to become one of the most prolific chefs of our time and household name. Wolfgang Puck changed the perception of what it means to be a chef, and along the way, invented a radically new American cuisine. “Wolfgang,” a film that showcases the power and strength of the human spirit, will be available to stream on Disney+ following its world screening premiere at the Tribeca Film Festival on Saturday, June 12.

“I am not one to dwell on the past, but the way David Gelb told this story made me realize how far I have come from my humble beginnings,” said Wolfgang Puck. “In a single phrase, we call it the American dream.”

As a teenager in Austria, Wolfgang Puck harnessed his love of cooking to escape the harsh rule of his stepfather. A local apprenticeship forged his path to train at a revered French restaurant before landing in America at age 24. In ‘70s Hollywood, Puck began working at Ma Maison, crafting an original menu around fresh ingredients, making the once-tacky eatery a popular, acclaimed darling. Still, the lack of acknowledgment from Ma Maison’s owner pushed Puck to take the biggest risk of his career and open his first restaurant, Spago, an instant hit where famous clientele dote equally on Puck’s new American cuisine and personality.

Almost by accident, Puck created the concept of a “celebrity chef” with his decades-spanning television appearances, building a staggering global empire of restaurants, cafes and products for home cooks. But at home, frenetic professional demands disrupted his family life.

“Wolfgang stepped into the spotlight in a way no chef ever had before,” said David Gelb, director. “In doing so, he showed that a chef could be a storyteller, a teacher and a friend. This is the tradition of Wolfgang Puck, and it has been a profound honor to tell his story.”

The film is produced by the award-winning filmmaking team at Supper Club, also behind the critically acclaimed projects “Jiro Dreams of Sushi,” “Chef’s Table” and “Street Food.” David Gelb serves as director and producer, Brian McGinn is producer and screenwriter, and Jason Sterman is producer.

Puck runs over 100 restaurants around the world, holds two Michelin stars, is the only two-time recipient of the James Beard Outstanding Chef Award and has been the official caterer for the Academy Awards® for over 20 years. His name spans across cookbooks and kitchen and food merchandise. His trademark recipes have been syndicated in newspapers and websites. He hosted the Emmy® Award-winning show “Wolfgang Puck” on the Food Network, was the first regular guest chef on “Good Morning America,” has been honored with a star on the Hollywood Walk of Fame and was inducted into the Culinary Hall of Fame.

Supper Club is the independent production company founded by filmmakers Jason Sterman, David Gelb and Brian McGinn, who are behind multiple award-winning programs including Chef’s Table, Jiro Dreams of Sushi,13th, Amanda Knox, Trial By Media and Marvel’s 616. Under their nonfiction pact with The Walt Disney Company, Supper Club is producing both franchise-based and original-concept programming for Disney+, as well as all other platforms and networks under the Disney umbrella. They are currently in production on upcoming Disney+ projects with Pixar, Lucasfilm and Walt Disney Animation while also continuing to produce Netflix’s Chef’s Table and Street Food. On the scripted front, they are currently in development on Consumewith 21 Laps for Searchlight Pictures.