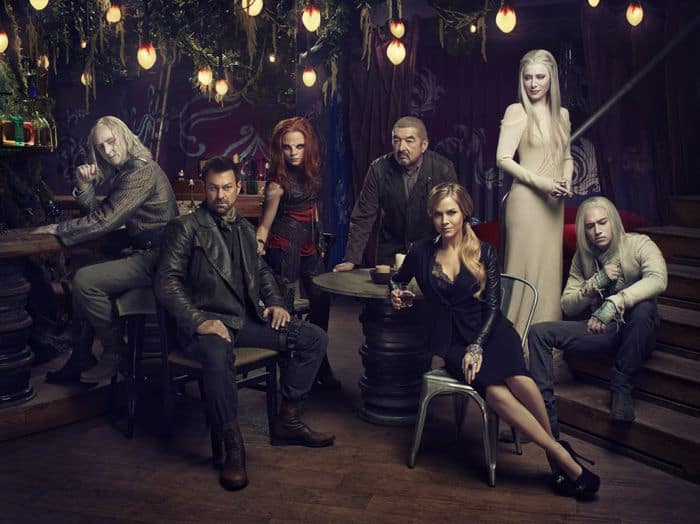 Warning: This review does contain some spoilers from the premiere episode, including how much time has passed, but does not spoil any big twists, nor reveal the fates of those whose continued survival is left up in the air.

SyFy’s DEFIANCE starts its second season this week with “The Opposite of Hallelujah.” It’s been nine months since the events of last spring’s finale, and everyone has settled into a new normal. The city is being ruled by an outside force and most of the residents that are still in the town seem to have accepted that, finding ways to change and continue their daily routine. But rebellion seems to be brewing just under the surface. Will those rumblings soon erupt into full-scale insurgency?

Last season’s cliffhanger is a big one, so many viewers might assume that DEFIANCE won’t make a significant time jump. They would be wrong, but I think the writers are right to skip over what they did. The ramifications of what occurs are far from over; there just hasn’t been much action in the meantime. Instead, there’s a sense of uneasy calm, where our heroes have had a chance to get used to the changes. Viewers are dropped into a different world, which right away infuses the proceedings with a sense of freshness and movement.

“The Opposite of Hallelujah” is an interesting study of various characters. Much of DEFIANCE is action-based, with plenty of fights and special effects. But this year’s premiere is quieter, instead giving us some really cool ways for the characters to grow and develop, which happens in season one, but is more prevalent now. Rather than providing a bunch of OMG moments, though the episode sure does end with one, DEFIANCE focuses on setting individuals up in situations that will challenge them. I definitely dig this direction.

Amanda Rosewater (Julie Benz) is no longer the mayor, but her primary concern is still with the town and its people. Amanda is given an opportunity in the premiere that might allow her to effect positive changes in the community, but it would mean not only swallowing her pride, but also partnering with a man she does not trust in the slightest. Should she do it?

There is a justifiable debate here as to whether a broken system can be affected from the inside, or if it’s better to attack from the outside. Amanda is in a rare position to pick which she’d like to do, something most will not be afforded. One can see how some followers could see her as a traitor for working with the enemy, but at the same, it might be her best chance to make their lives better. We know Amanda can put the townsfolk first, but is that the best option here, even if she’s willing to let others hate her while she works for the good of the many?

Another person pondering power is Alak Tarr (Jesse Rath). With his father no longer operating the family business (don’t worry, I won’t reveal what’s happening with Datak (Tony Curran) here), Alak is the male heir. His mother, Stahma (Jaime Murray), has no official say in things, being a woman, though viewers will know that rules are merely speed bumps for Stahma, not roadblocks. Alak now has a choice on whether to listen to someone who might be wiser than himself, or go in his own direction, fighting for his reputation and seat along the way. Is this young man ready to step up as an adult?

I am still fascinated by the Tarr family. Datak does a very unexpected thing in season one when he murders a general, and while parts of what we learn about his situation in this premiere are the weakest points in the episode, there’s also some meaty stuff there. Stahma has a disposition that seems wholly alien, often moved by motivations and loyalties that are far apart from those most humans would have. And now Alak, who seems like a typical teenager in the freshman year, is asked to take a bigger part in his father’s dealings, so it’s intriguing to see whether culture or heritage will win out within him.

If you’ve seen the five webisodes posted on DEFIANCE’s official website, you will already know that Nolan (Grant Bowler) is traveling around the country, searching for signs of his missing daughter, Irisa (Stephanie Leonidas). This means Nolan is in other settings, providing glimpses of what other areas of the former United States look like. I don’t want to give away anything about his story in “The Opposite of Hallelujah,” but it is cool to expand what we get to see of the world, and how others outside of Defiance are handling things.

This season premiere is pretty well done overall. Aside from what appears to be an inexplicable element of the Datak plot, the rest of the cast is allowed to be dynamic, and the story has departed from any type of formula, providing an engaging, serialized tale. This is a strong start to year two.