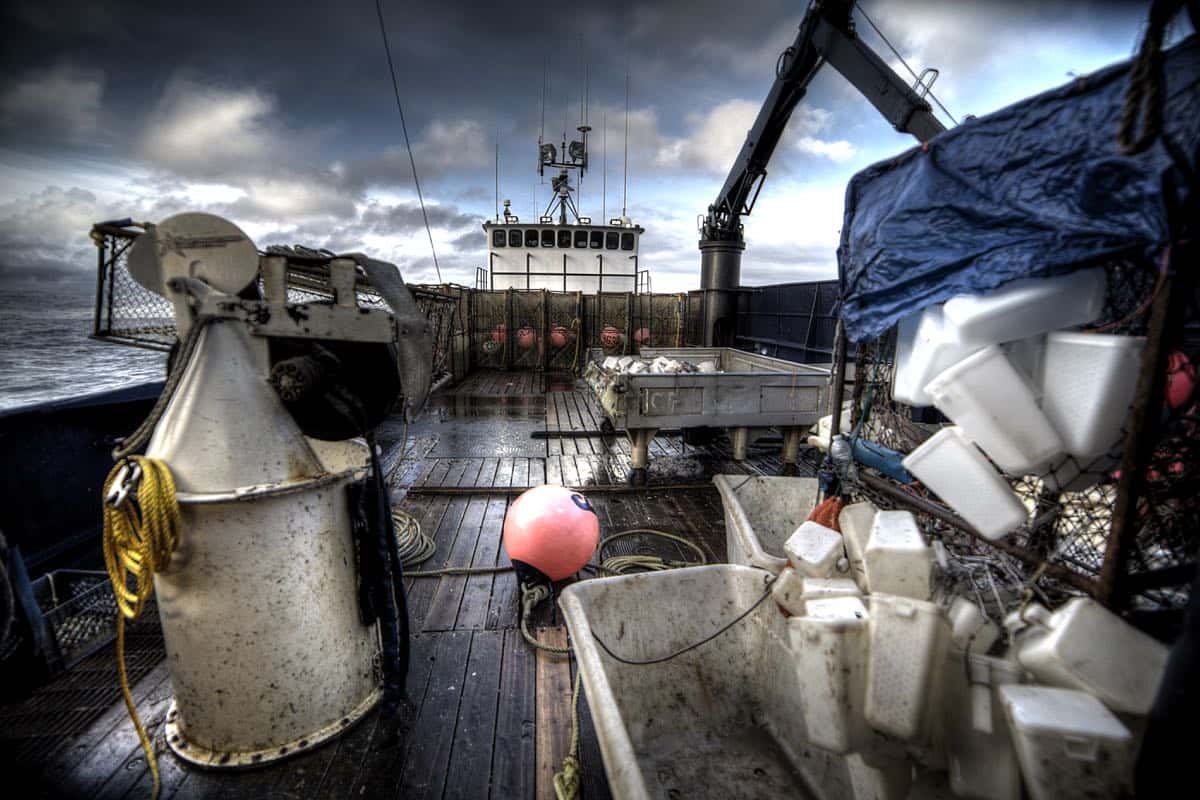 Over the past 12 years, the veteran captains of DEADLIEST CATCH thought they’ve seen it all. But this year proves to be like no other on record. Generations of fishermen have made a hard living setting out of Dutch Harbor, Alaska, one of the nation’s most prolific crabbing ports. However, this year the crabs have seemingly vanished – igniting a gruelling hunt to save the fleet’s way of life. After a massive temperature spike in the Bering Sea, traditional fishing hot spots are now coming up empty.  And the situation leaves everyone in the fleet – veterans and greenhorns alike – wondering what can be done to save the season? From Original Productions, the 16-time Emmy Award-winning series DEADLIEST CATCH returns for its 13th season on Tuesday, April 11 at 9 PM ET/PT on the Discovery Channel.

“The fleet is going to need to go further and deeper,” said Captain Sig Hansen of the F/V Northwestern. “Nobody is going to take away a fishermen’s way of life.  I can guarantee you that this fleet will not quit…  But we’re always fearful that this will be our last year.”

Temperatures in the Bering Sea have risen around four degrees in the last year alone or 50 times the global average. As a result, the crabs have gone out to deeper, cooler waters. On the Northwestern, the crew is ready to go, but they’re missing an important piece – Captain Sig Hansen. Last year, Sig endured one of the most difficult seasons of his career, narrowly surviving a major heart attack known as a widow maker. Sig faces a true crossroads in his life, and wonders just how much this profession is worth, especially after his wife June delivers the incredible news that he’s now a grandfather. Will this be the year he finally turns over the wheelhouse for good?

On the 113-foot Time Bandit, all Captain Johnathan Hillstrand wants is an easy final season on the Bering Sea. After 37 years, he is finally ready to retire from the crab fleet. But the Bering has different ideas. He starts out stuck in Seattle doing last-minute repairs. And then, once he does get out to sea, he faces one of the toughest seasons he has ever encountered. Will the veteran Captain be able to retire in style like he dreams?

On the 108-foot Saga, Captain Jake Anderson has a lot riding on him when he’s given more crab quota than anyone else in the fleet. It’s a chance for him to establish his legacy as one of the best fishermen on the Bering Sea, but there is also a catch.  If Jake doesn’t capture the crab in time, he risks losing his quota to another captain.  Up against the clock, Jake races to set off into the Bering Sea, but first he needs to find his missing crew.
On the Wizard, the hard-driving Captain Keith Colburn is back with a vengeance having tackled his personal demons and addictions. This year, Keith is determined to be the top producer in the fleet – no matter the cost.

Meanwhile, as the news travels across the fleet about the missing of crab, Captain Wild Bill begins to question his recent big purchase of the F/V Summer Bay. A hired gun since 1975, Wild Bill gambled a small fortune to buy the crab vessel. But being a boat owner, brings boat owner problems when a valve suddenly fails and causes a surprise mess. And in good old-fashioned Wild Bill style, he blows a fuse as well.

Sean Dwyer, the youngest captain in the fleet, is back with the Brenna A. Sean struggles to find quota with the Bairdi crab season completely shut down. Since his father’s passing, the family legacy has fallen on his shoulders and he struggles to keep the family business alive.

Forty-foot waves, hurricane force winds, heavy-machinery and massive icebergs are just a few reasons that no season is ever the same on DEADLIEST CATCH.  Surrounded by death and a multitude of injuries these brave men struggle to return. The men are reminded of nature’s fury when the captain and crew of the F/V Destination go missing shortly after setting out in search of crab off the coast of Alaska. It’s a sad moment for many of the captains – and the tight-knit community of fishermen – who considered these men as friends. With one of the toughest seasons on record, Captain Johnathan has officially decided he’s had enough. But only time will tell if anyone else follows his lead.