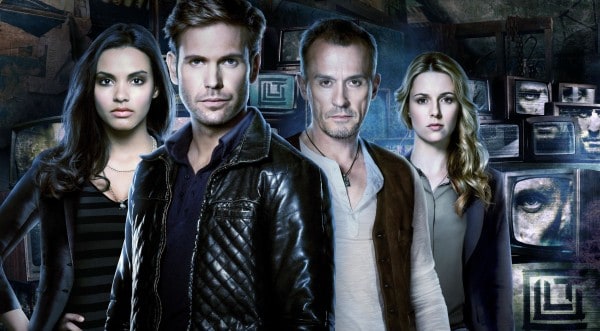 As the CW’s new pilot of CULT, entitled “You’re Next,” begins, Detective Kelly Collins (Alona Tal, Supernatural) searches for her missing sister, whom was last seen in the company of cult leader Billy Grimm (Robert Knepper, Heroes, Prison Break). Kelly thinks Billy has taken her little sis to strike a blow against Kelly personally, since she also used to follow Billy, and he didn’t take her leaving well.

So CULT is a crime drama then, with the heroes having to do battle against a mysterious sect that brainwashes their followers and makes them disappear?

Not even close. Instead, the version of CULT that stars Kelly is a series called CULT that exists within the world of CULT, both of which air on the CW. And Billy, while just an actor named Roger Reeves, also pops up everywhere in the real world, presumably mostly in advertisements for the show, layering the same level of creepy that he has done on screen, until one is convinced he may be connected to actual crimes. Confused yet?

Well, that’s not even the half of it. Former reporter Jeff Sefton (Matthew Davis, The Vampire Diaries) is looking for his own brother, Nate (James Pizzinato, Alcatraz), whom has gone off the grid in a large and bloody way, and, get this, Nate is a super fan of the CULT within a CULT. All of the clues Jeff finds point to the fact that the show is more than just a show, and there are shady people out there who take the whole thing very, very seriously.

Plus, both the fictional and real CULT bear the same title and ending cards.

CULT is the epitome of meta in an internet age where meta is the trend. The makers of CULT are hoping that real life fans get involved in the show, though hopefully not in a criminal way, as the fans in the show do, and make this part of their lives. Every word supposedly means something, every scene contains a clue, and an intricate web of mystery is being spun. This is pounded in viewers’ heads so fervently that there is no way to miss the point.

Now, this is the CW, so there are limits into what CULT will do. However, given that the cast isn’t dominated by a bunch of teenagers, romance is barely a whisper in “You’re Next,” and the writing in the first episode seems smart and tied together, this could just be something different that broadens the network’s appeal.

Obviously, the CW is hoping to capture the same population segment who enjoy The Vampire Diaries and other supernatural dramas, even reusing performers from their other franchises. But they are also building something special, something that could itself garner a cult following, and something that might make a splash in the television landscape.

One example of what I am talking about is when, late in the hour, we learn that Jeff is fired from his job at a reputable newspaper because he fabricated a source for a story. This means that Jeff is not a reliable witness, and thus, even viewers may doubt his sincerity and motivations. It’s a nice twist that could keep the direction of the plot shrouded in darkness. But instead of embracing it full on, the show has a character named Skye (Jessica Lucas, Melrose Place, Cloverfield) who believes in Jeff, and thus, we believe in him, too.

Skye works for the network, which gives the series an excuse to venture on set frequently. She is a lowly researcher, though, so her position is expendable, and she can miss work for periods of time without arousing suspicion. It’s a good role to cast her in, someone who has reason to be suspicious about the real-life following, who is open to conspiracy theories, and who has a believable inside track.

While CULT only boasts four main characters, there are a myriad of other players, such as: Marc Segal (Andrew Leeds, Bones), a network executive who wants to help CULT blow up; Kirstie (Marie Avgeropoulos, The Inbetweeners), an apparent cult member who arranges for Marc’s kidnapping; Detective Sakelik (Aisha Hinds, True Blood), the cop assigned to Nate’s disappearance, and who has a tattoo that might connect her to the villains; and Gary Fisher (Tom Amandes, Parenthood, Eli Stone), who works for CULT and dismisses Skye’s concerns out of hand.

What this means is there are a lot of different directions that the story can go, and keeping viewers guessing will be a main draw of CULT.

Only time will tell if CULT can pull off what they’re trying to do. The first episode is promising, but sustained surprises over time is much more difficult, and it’s unknown if it can maintain the quality. A great genre series is a marathon, not a sprint. But at least CULT is coming strong out of the gate.