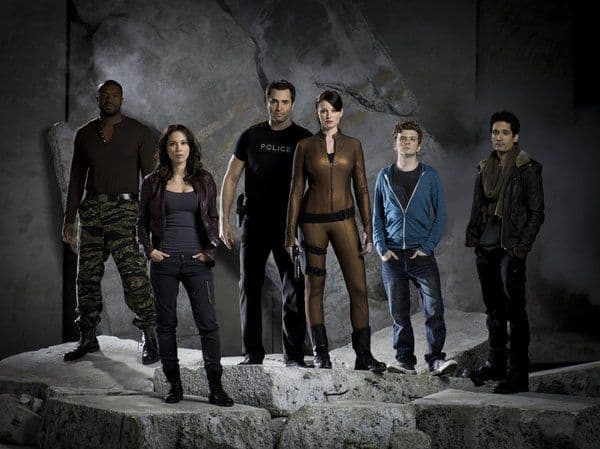 The first episode of the Canadian series CONTINUUM, titled “A Stitch in Time,” airs this Monday at 8 p.m. ET on the SyFy series. Beginning in the year 2077, CONTINUUM presents a bleak view of the future. Everything might seem glossy and technologically advanced, but democracy has given way to corporate control. A terrorist group known as Liber8 decide that they must do something about the lack of individual freedom, and so blow up government buildings, killing tens of thousands of civilians in the process.

As “A Stitch in Time” begins from a terrorist’s perspective, in the form of Edouard Kagame (Tony Amendola, Once Upon a Time, The Mask of Zorro), it immediately sets us wondering if we should be sympathizing with the cause. After all, in the modern world we celebrate democracy, and many hate big business, especially after the economic recession of the past few years. Maybe Liber8 has a point.

But then again, after seeing the destruction Liber8 causes, it’s hard to feel anything for them. Anyone who would callously murder so many innocents cannot be a hero; it goes against the grain of what a hero stands for. Unless they think these deaths don’t matter, since they are working to prevent this time from ever happening, but thinking that way will just give one a headache. So, instead, we root for the cop who represents the government, Kiera Cameron (Rachel Nichols, Star Trek, Alias).

The beginning of CONTINUUM is amazing. Besides the situation itself, which is not only intriguing, but also something we can relate to, exaggerating a battle that has already begun in our time, the visuals are outstanding. Everything about 2077 is cool, from the buildings, to Kiera’s built-in technology. It’s an impressive look at a futuristic world.

Then, on the day the Liber8 terrorists are to be executed, they manage to set off a bomb that takes the eight of them, plus Kiera, to the year 2012. Why does the show do this? Sure, it’s probably much cheaper to set a television program in the current era, and yet, after such a stupendous opening, the rest of the hour feels like a let down, wishing fervently we could go back to the future.

Kiera also has that wish, because she has a young son. She is not well adjusted to 2012, her mannerisms stiff, and her behavior awkward. Her instincts remain intact, as does the equipment in her body and clothing, so she is still able to do some of her duties. Thus, the protagonists mission becomes two fold: stop the bad guys from destroying her world, and to get home to her family.

Quickly, “A Stitch in Time” moves into police drama territory. Kiera takes up with the local cops, in particular, a man named Carlos (Victor Webset, Castle, Mutant X). It seems a bit reckless, knowing that these police officers aren’t prepared to take on the criminals of the future, but Kiera has to turn for help somewhere. And so, the set up seems to be that Kiera and Carlos will try to track down the terrorists from 2077 and stop them, a pedestrian premise, not nearly as interesting as what is happening in the beginning.

The wild card in CONTINUUM is Alec Sadler (Erik Knudsen, Jericho, Scott Pilgrim vs. the World). Played by William B. Davis (The X Files) in the future, Sadler is a young kid in 2012 who is just developing the technology that Kiera uses in her everyday work. The frequency in her suit connects the two of them, and he provides a thru line, with “A Stitch in Time” showing viewers how he ends up in the future.

What role will Sadler play? He provides Kiera with some time travel theory, which explains his lack of surprise when Kiera and the others leave 2077. But that doesn’t tell us whether they ever get home or not. It merely sets up that he remembers meeting her in the past, and knows something about what is going on. Is that why Kiera isn’t all that happy to talk to him, or act odd in discussing how he ends up? She is upset that Alec didn’t warn her, or save her from this fate?

How much does the future Sadler know, and because he does seem to have knowledge is these past events, does that mean the terrorists will fail in their plots, leading to the same world introduced in the opening? As viewers, we know that Sadler becomes a corporate giant, another clue that the series writers may be pro-capitalism and anti-democracy. We also know Sadler won’t be killed, but other than that, his role remains a mystery.

Overall, I am intrigued by the mystery and the set up, but really, really wish that at least some of the show’s action would be set in 2077. With that brilliant tease, nothing in 2012 will seem nearly as enticing by comparison. If the show will return to that time, or maybe even jump to a mid-point, giving us some of the setup, but also moving towards that better tech, it could be much better than what it appears to be on its face.