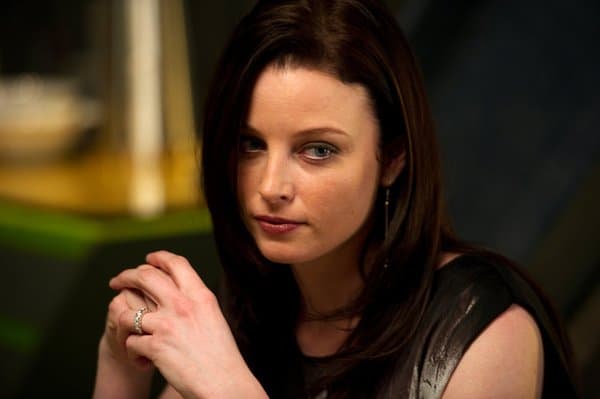 SyFy’s Candian import CONTINUUM returns tonight for a second season. The premiere, “Second Chances,” picks up a little bit after the first season ended, with several of the primary characters still dealing with what the finale revealed. But a new assassination quickly forces the good guys to pull together, and a new mission is found.

The character development in CONTINUUM is top notch. Each of these people have their own defined motivations, and sometimes that means they work together, and others times they are at odds. Even when one of them cares about someone else, such as Kiera (Rachel Nichols) feeling a kinship with Carlos (Victor Webster), Kiera may still do something Carlos wouldn’t want when the situation arises.

Now that might seem like a “duh!” move for a story to go in, but it’s found far less than one might expect on television today. The best shows know who their personalities are, and construct situations that test these people in interesting ways, putting them in context where they have to choose between realistic, imperfect options. CONTINUUM does this, raising it above many of its peers, leaving a seed of doubt that a person, in the correct situation, might not do right by another at the end of the day.

In “Second Chances,” Kiera is wrapped up in her grief about not going home, and thinking that being a vigilante is the right way to help the world, unfettered by regulation. Alec (Erik Knudsen) also splits off, isolating himself as he tries to deal with the message his future self (William B. Davis) sends him in Kiera’s programming. But both are pushed back into the team when Carlos (Victor Webster) and Dillon (Brian Markinson) need them, although their actions are not completely altruistic.

I really like the dynamic between Kiera and Kellog (Stephen Lobo). While Kellog certainly has less-than-noble tendencies, he does work more for Kiera than against her. Her falling into bed with him is as much about her loneliness and the connection she feels to him, since they’re both trapped in the past, as it is about Kellog himself. Their relationship is complicated, and while they might eventually make a go at serious romance, once Kiera accepts that she won’t see her husband, Greg (John Reardon), again, that won’t be happening anytime soon.

Of course, you just know that the episode Kiera actually commits to Kellog will be the same installment in which she is reunited with Greg.

At first, I thought CONTINUUM would be a typical crime procedural, with a few science fiction trappings. But season one proved that the series can do much better, weaving a complex tale of terrorists and police, fantastical science, and complicated story, with plots stretching from 2077 back to today. What appears to be a run-of-the-mill law breaker could actually be something much more, and he or she usually is, since this show doesn’t waste its time with stories that don’t have larger implications.

“Second Chances” picks up this sort of thread and runs with it when the Mayor is killed during a press conference. Who is behind it? Liber8? Mobsters? Jim Martin (Tahmoh Penikett), the mayor’s political rival? By the end of the hour, we know, but there is also very clearly more to it than just learning the shooter’s identity.

Liber8 is reeling after the loss of its leader. Sonya (Lexa Doig) thinks she should be in charge, but that’s not readily accepted by the others, as one might predict. If Kagame (Tony Amendola) really did name her his successor, why didn’t he tell the others and smooth the transition? Is Sonya lying? What are her plans for the group?

And there’s still Travis (Roger Cross), who cannot be counted out. I will not reveal exactly what happens with him because it would be too spoilery, but Travis has some major twists in this first hour back.

The biggest unknown factor currently in CONTINUUM remains Agent Gardner (Nicholas Lea). When last we see him, he gets a little of Kiera’s secret, though does not have the ability to understand what he is seeing yet. In this episode, he brilliantly maneuvers a couple of characters together, then just sits back and watches. Someone this cunning and intelligent could prove a real thorn in Kiera’s side, and there’s no telling what he will do when he eventually realizes what he dealing with, which he surely will.

What is most interesting in “Second Chances,” though, is Alec’s message to himself. We know he orchestrates the terrorists and Kiera’s trip to 2012, and we know he is involved in Liber8’s activities. What we don’t know is why, or how to reconcile this man who is Kiera’s friend in both time periods doing something to her that seems so cruel. This premiere doesn’t clear up those things exactly, but it does start down a path of explanation, one that will eventually lay out the entire premise of CONTINUUM.

In all, “Second Chances” is a fantastic return for CONTINUUM, deepening the mythology, and letting the actors really dig into some emotional heft in their characters. It should be a very satisfying sophomore season.