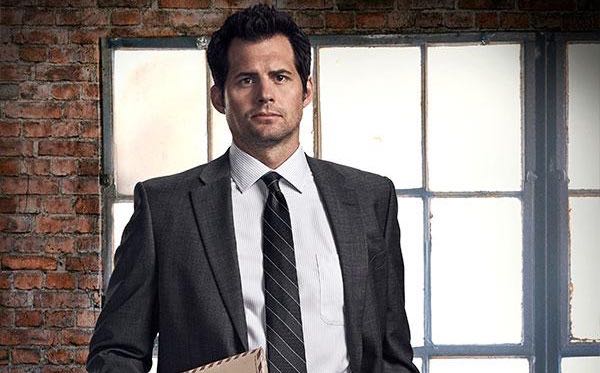 In the new drama series CONDOR, which follows the theme of the film “Three Days Of The Condor,” an intelligence analyst finds himself in the crosshairs of a vicious government conspiracy that leaves him running for his life and with no one to trust. When everyone you thought you knew is suddenly dead or intent on killing you, there leaves virtually no one to turn to. Fortunately, there is a good reason this particular analyst was hired by the government in the first place — he can out-think them and outsmart them — if he can find a way to keep moving so that he has time to strategize a way to fight back and clear his name. In an exclusive interview, co-star Kris Polaha previewed his tantalizing role in the thriller series CONDOR.

You have role in this summer’s new thriller series CONDOR and your character Sam seems a little ambiguous. Are we supposed to trust and root for him?
KRIS: [Laughs] I don’t think I can talk about anything. Here’s what I will say: I will say that my guy is somebody that Max Iron’s character [Joe Turner] trusts implicitly, and they’re best friends. And my character’a wife and children are an integral part of his journey. I think what Jason and Todd have done with the script, the idea of “Three days of the Condor” in CONDOR is phenomenal. I remember working with William Hurt, and the whole time William Hurt kept saying “pandemic.” It’s like the stakes are so high on the show and for the series, and when you look at it in the scope of what’s happening globally, you just pray to sweet Jesus that it doesn’t roll the way that it’s going to roll on the show. But it’s a fast-hitting show. It’s super well-shot. The writing’s unbelievable. One of the great things about AT&T and DirecTV and MGM, they’re so supportive of the project that as they were filming it, they realized that, if certain things that they already shot didn’t make sense anymore, they had to rewrite and reshoot. So they spent the money and the time to make it a really great story from beginning to end. And I’m excited to share it with the audience. I think people are going to love it.

Your character Sam does get to play a little bit of an action-hero at one point. What was that like to shoot?
KRIS: Well, you know what, it was funny. The stuntman that day, he rolled in like a cowboy and he said to me, “Make me look good, buddy.” Then he got in that car and he backed up like a ninja and he smashed right into a wall. And I go up to the window, and I was like, “Are you okay?!” And he’s like “Yeah, yeah. Thanks for making me look good, pal.” It was fun. It was a good shoot. And we had a lot of fun as a family. My wife and our kids got to join me. We lived in Toronto all summer and we got to travel; we’ve been in Montreal, New York City and Washington DC and Philadelphia. So it was a very cool experience all around. And working in Toronto’s amazing. It’s great people, good crew. So it’s a good job.

What was it like working with Max [Irons] on CONDOR?
KRIS: Max is awesome! He’s a great guy. He’s super talented and, obviously, his father was integral in my life as an actor, particularly with the movie “Lolita.” So it’s funny — we were filming this really intense scene and we become friends and I was like, “I can’t NOT talk to you about this — but your dad is …” So he’s a really good guy.

To see if Sam will be the one person that Joe Turner can trust when it seems like everyone is out to get him, be sure to tune in for the premiere of CONDOR on Wednesday, June 6th on Audience Network available on DirecTV. To see special clips from the show and get further information throughout the season, you can follow the show on Twitter @CondorATT. To see what else Kris is up to and where his next adventure takes him, you can follow him on Twitter @KrisPolaha.