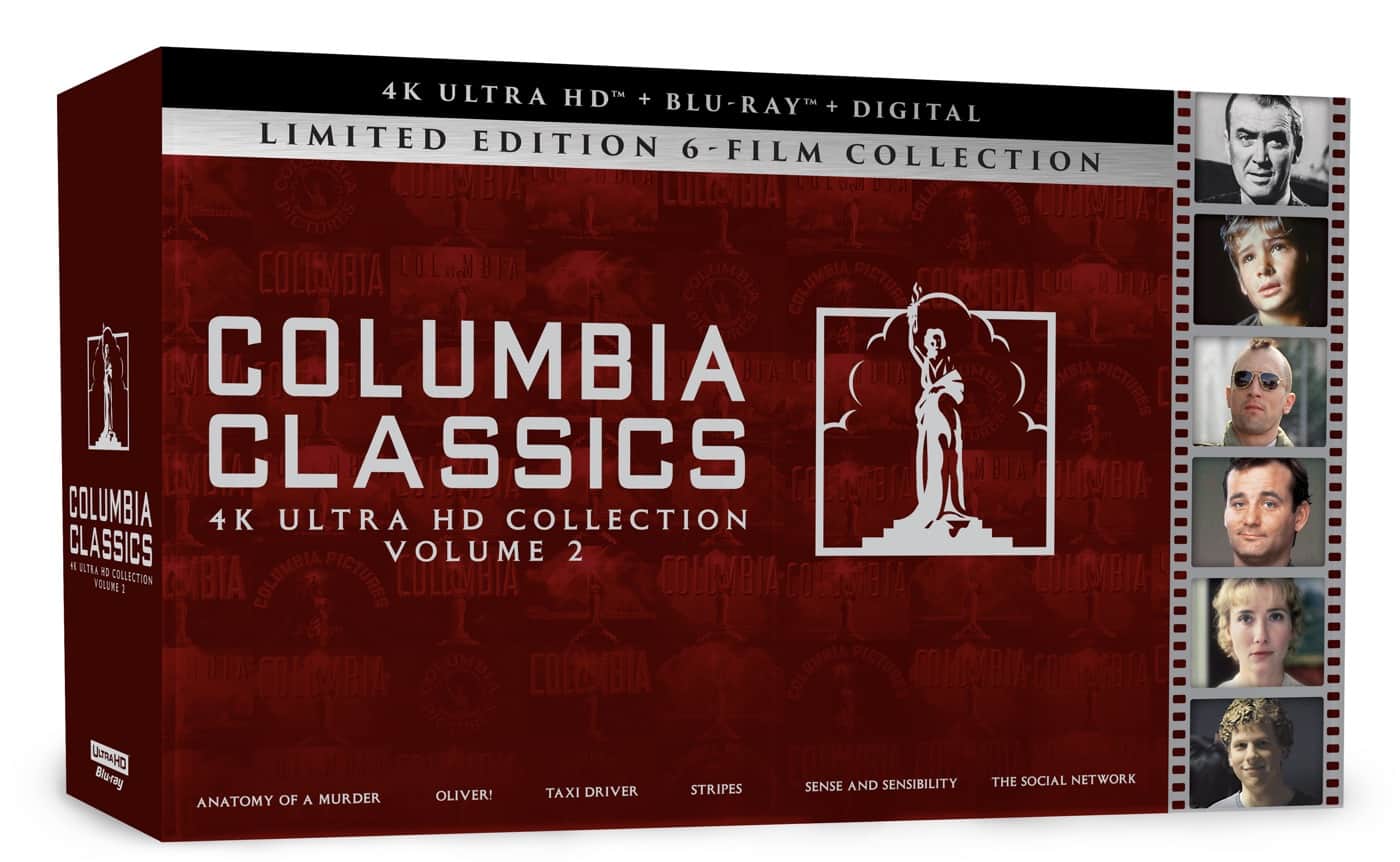 In addition, the set also includes an exclusive Blu-ray™ bonus disc featuring 20 short films from the Columbia Pictures library, all presented in high definition. These shorts, curated from over 80 years of the studio’s history, showcase a wide scope of creative output across the worlds of both live-action and animation. From The Three Stooges to award-winning mid-century cartoons to modern favorites from Sony Pictures Animation—along with some surprise rarities—this bonus disc is the perfect complement to this essential classics collection.

ANATOMY OF A MURDER
Synopsis:
A riveting courtroom drama is brought to life with an all-star cast in the suspenseful and highly acclaimed ANATOMY OF A MURDER. Nominated for seven Academy Awards® including Best Picture (1959), the film pits a humble small-town lawyer (James Stewart) against a hard-headed big-city prosecutor (George C. Scott). Emotions flare as a jealous army lieutenant (Ben Gazzara) pleads innocent to murdering the rapist of his seductive, beautiful wife (Lee Remick). Produced and directed by the renowned Otto Preminger, the film features a brilliant score by Duke Ellington. Packed with drama, passion and intrigue, ANATOMY OF A MURDER is a cinematic masterpiece that will keep you on the edge of your seat.
ANATOMY OF A MURDER Disc Breakdown

ANATOMY OF A MURDER has a run time of approximately 161 minutes and is not rated.

Synopsis:
Winner of six 1968 Academy Awards® including Best Picture, it’s OLIVER!, the beloved musical version of Charles Dickens’ Oliver Twist. A magnificent screen adaptation of Lionel Bart’s sensational stage musical, OLIVER!, directed by Carol Reed, is the timeless story of a plucky young orphan and his quest for love and happiness in a world populated by rascals, rogues, and thieves. A wondrous blend of drama, comedy, adventure and song, OLIVER! is grand and glorious entertainment the whole family will enjoy.

OLIVER! has a run time of approximately 153 minutes and is rated G.

TAXI DRIVER has a run time of approximately 114 minutes and is rated R.

Synopsis:
When quick-witted slacker John Winger (Bill Murray) loses his apartment, girlfriend and job all in one day, he does what any red-blooded American would do: he joins the army and nearly starts WWIII. Directed by Ivan Reitman and also starring Harold Ramis, John Candy and John Larroquette, STRIPEShas become one of the most beloved comedies of all time. And that’s the fact, Jack!

Synopsis:
Nominated for 7 Academy Awards®, including Best Picture (1995), and directed by Ang Lee. Emma Thompson, Alan Rickman, Kate Winslet and Hugh Grant star in this captivating romantic comedy that swept the Ten Best Lists and was named Best Film at the 1996 BAFTA Awards. Based on Jane Austen’s classic novel, SENSE AND SENSIBILITY tells of the Dashwood sisters, sensible Elinor (Thompson) and passionate Marianne (Winslet), whose chances at marriage seem doomed by their family’s sudden loss of fortune. Rickman, Grant and Greg Wise co-star as the well-intentioned suitors who are trapped by the strict rules of society and the conflicting laws of desire.

SENSE AND SENSIBILITY has a run time of approximately 136 minutes and is rated PG for mild thematic elements.

Synopsis:
THE SOCIAL NETWORK, directed by David Fincher, is the stunning tale of a new breed of cultural insurgent: a punk genius who sparked a revolution and changed the face of human interaction for a generation, and perhaps forever. Shot through with emotional brutality and unexpected humor, this superbly crafted film chronicles the formation of Facebook and the battles over ownership that followed upon the website’s unfathomable success. With a complex, incisive screenplay by Aaron Sorkin and a brilliant cast including Jesse Eisenberg, Andrew Garfield and Justin Timberlake, THE SOCIAL NETWORK bears witness to the birth of an idea that rewove the fabric of society even as it unraveled the friendship of its creators. Nominated for 8 Academy Awards®, including Best Picture (2010).

THE SOCIAL NETWORK has a run time of approximately 120 minutes and is both rated PG-13 for sexual content, drug and alcohol use and language and Unrated.