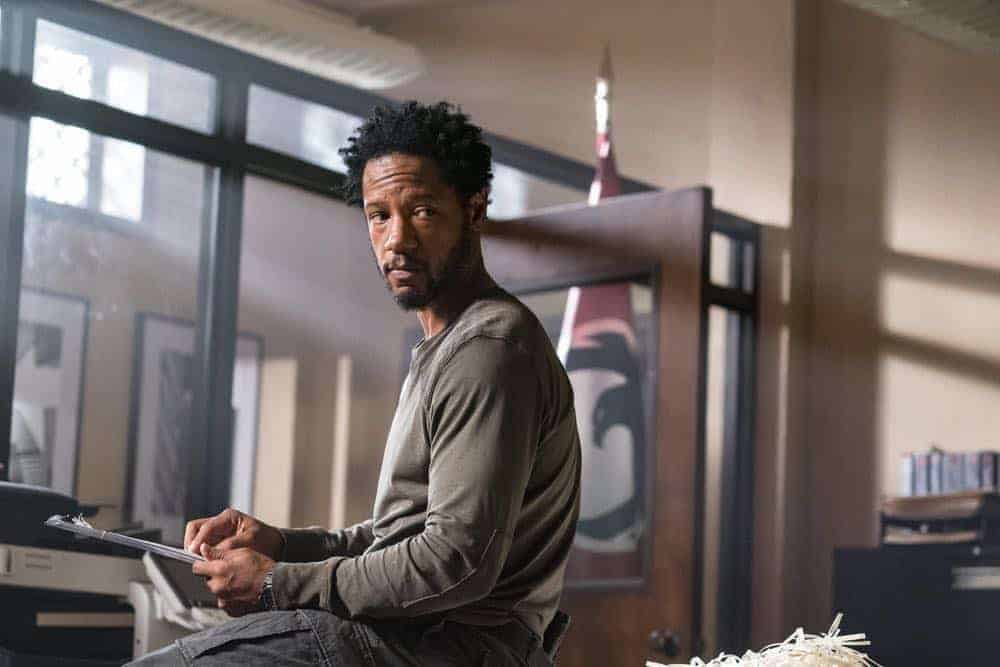 Now that its third season is under way, USA Network’s drama series COLONY continues its journey following the Bowmans into resistance territory in order to use the gauntlet to fight back against the alien occupation of the entire planet. Broussard (Tory Kittles) may have elected to stay behind and fight the good fight within the LA bloc, but he remains just one man against an entire alien species. So Broussard is a bit untethered and looking for a plan to strike back. In search of a few answers and clues, we had the privilege of speaking with star Tory Kittles in an exclusive interview about what lies ahead for Broussard in Season 3 of COLONY.

I’ve seen a few episodes of the new season. I can say it’s quite impressive and I’m very excited where it’s going.
TORY: I’ve seen seven [episodes], and I’m impressed too. Yeah, I’m very excited about this season. I think this is definitely our best season yet. I think leaving the LA bloc, it opened the show up too, tremendously. The move to Vancouver, I think, really changed the show, changed the scope of the show, and everything just became grander. Also, too, just the relationships, there’s such history now between the characters. There’s more of an investment. I think the audience is gonna be really moved in the way that it all comes together.

I was startled to see how long they keep your character separated from the Bowmans. I mean, I get where their paths diverged, but it’ll be interesting to see if they actually do reunite or team up again this season.
TORY: When it finally does happen, if it finally does happen — haha, spoiler alert — it’s definitely worth it because of everything that each of them have gone through separately. When they finally get together, the energy becomes electric. It’s magical. It really is: it’s magical.

And Broussard will have some choice words for Proctor Snyder (Peter Jacobson), if he gets to be in the same room with him again.
TORY: [Laughs] You know that’s a spoiler question, right? It’s funny, [Peter and I] have this whole sort of war thing going on in the social media sphere, but yeah, we haven’t actually worked that much together. I guess I just don’t like the dude for some reason.

As we know, Snyder likes to play it both ways. He wants to be a good guy, and he wants to be a bad guy. Do you think this season is gonna make that more definitive for him? Or is he gonna be still straddling both worlds?
TORY: [Laughs] I think a zebra never changes its stripes.

What about Broussard? He seems a bit untethered when we first meet him this season. Why is that? Why hasn’t he found his niche right away?
TORY: I think it’s new territory for him. First two seasons, there was a group, and there was this camaraderie. He was used to that because he’s a soldier. He’s used to operating and having other people have his back and fighting a common enemy and all of that, all of the details of war. He was used to that sort of world. But now, the bloc has changed so much. The whole world has changed so much, that he doesn’t know who the real enemy is, and he’s also alone. . . When we find him, there were these connections that really paid off in the first two seasons with him, especially in regards to the Bowman family. It started out with this really sister/brother relationship with Katie [Sarah Wayne Callies], and then somewhere along the journey, the dichotomy changed, and him and Will [Josh Holloway], who started off as adversaries, became brothers. That’s attributed to just great writing and storytelling. That’s Ryan Condal and Carlton Cuse and Wes Tooke and everybody else in the writers’ room. But all of that’s been stripped away from him when we first meet him. I think he’s trying to figure out who he really is, along with trying to find out who is the real enemy. You make so many sacrifices when you choose a side, when you choose to resist, the consequences that come along with that. And part of his consequences have been dealing with the deaths of his comrades that he feels responsible for. I think that’s something that weighs heavy on him, which is why he had to return back to the bloc, back to the LA bloc. That was really why it was important for him to go back because he felt that it was unfinished business.

Do you think he regrets handing over the gauntlet so easily and just letting the Bowmans take off with it?
TORY: I think he knew he was in a place where he was ready to sacrifice his own life, but if it came down to it, that may not have necessarily been the best thing for the overall resistance movement. I think he’s felt that he could trust Katie and Will to do the right thing. They earned his trust. They’ve proven that they would do the right thing with the gauntlet. I think he felt that it was the better move because he didn’t know what was going to be in store when he got back to the LA bloc.

I’m kind of surprised he let them go off with Snyder around them still. He never seems to trust anybody who is aligned with the [Hosts].
TORY: Yeah, but I think he knows Katie pretty well, and he knows Will pretty well, and he also knows that Snyder’s no match for that crew.

We know this season’s a little bit different. Again, it starts off with your character, Broussard, on his own path. Besides just kind of looking for purpose, is he ready to meet up with a new team? Does he want to create his own team? Where’s his head at?
TORY: I think what Broussard has always been wanting is to have a group of bad motherfuckers on his side. Where he can really go tear shit up. I really think the LA bloc is just about some unfinished business. I think, deep down though, he definitely harbors the idea and the need to be able to fight back with real soldiers, to be able to fight back with people who are just as committed as him and as Katie was and as Will became. But how do you find those people in a world that’s been so decimated? How do you find soldiers? I think that’s an obstacle for him this season.

This season offers quite a few twists. There’s something about the Hosts that we find out as they kind of discover what the gauntlet’s about and everything. Is that is going to change the perspective on how they view the Hosts. Were you surprised by that twist?
TORY: I’m surprised by pretty much everything I read in the scripts when I get them. This is another thing where being on the show is really like … because I’m a fan of the show. I would watch the show even if I wasn’t on the show. When I read the scripts, I become a fan, and I’m glad that I’m very proud to be a part of it because I’m like, “Oh, wow, I didn’t see that coming.” These guys have been able to do that every season. They’ve been able to just misdirect us in ways and trick us in ways and birth new relationships out of situations that I never saw coming. That’s been real fun to be a part of.

Broussard is a survivor. What is his go-to — not necessarily weapon of choice — but tool perhaps that he’s relying on as he’s now going about what might be the next phase of his resistance? What is he going to be using as far as tech or tools or weaponry?
TORY: I think his mind. There is something about — in a world of resistance — where even if you could go kill all the bad motherfuckers, maybe you shouldn’t. Maybe there’s a better way. I think that’s what Broussard is searching for. I think he’s searching for — well yeah, sure, you can always — if you have to — take somebody out. You have to do what you got to do. But I think he’s discovering more his own humanity by questioning the tactics. I think that’s where we see him moving towards throughout the progression of the season is that he’s figuring out other ways to handle war, as opposed to just killing.

We also saw, towards the end of Season 2, what looked like Will and Broussard were on basically a no-kill list. Every time they were confronted by the mechanical enemy, it seemed like they weren’t killed right on the spot. Is that protection going to be over him still this season?
TORY: Well, that is definitely going to come into play later on in the season. You will be surprised actually what that means. But it ties into something that … oh, how do I say this without giving it away? [Laughs] I don’t. I just gotta not say it.

Maybe you can talk about what you’ve enjoyed about working on the show, particularly the last couple seasons.
TORY: The cast, the writing. We’ve established such great relationships. We’ve become such a close-knit group. The writing has always been there to service us and make us want to come back. I think we all feel a part of something that’s so prominently speaking to things that are going on right now, but it’s doing it in a very smart way, so I’m proud to be a part of a show that’s really dealing with daily issues and making us think about our choices and making us think about consequences to those choices. It’s been just a fun ride. They continue to grow the show. I think we’re just sort of hitting the tip of the iceberg of where it’s really gonna end up.

With those teasers and insights shining a light on Season 3, and to see what Broussard next move is inside of the bloc, be sure to tune in for an all new episode of COLONY on Wednesday, May 9th at 10:00 p.m. on USA Network. To see fun sneak peeks and to follow the show as this season unfolds, you can follow COLONY on Twitter @ColonyUSA. Then to also interact with the cast as they live-tweet the episodes, be sure to follow on Twitter @WrathOfCondal @ToryKittles@JoshHolloway @Official_PeterJ and newcomers @PeytonList @GrahamMcTavish @WyaneBrady.