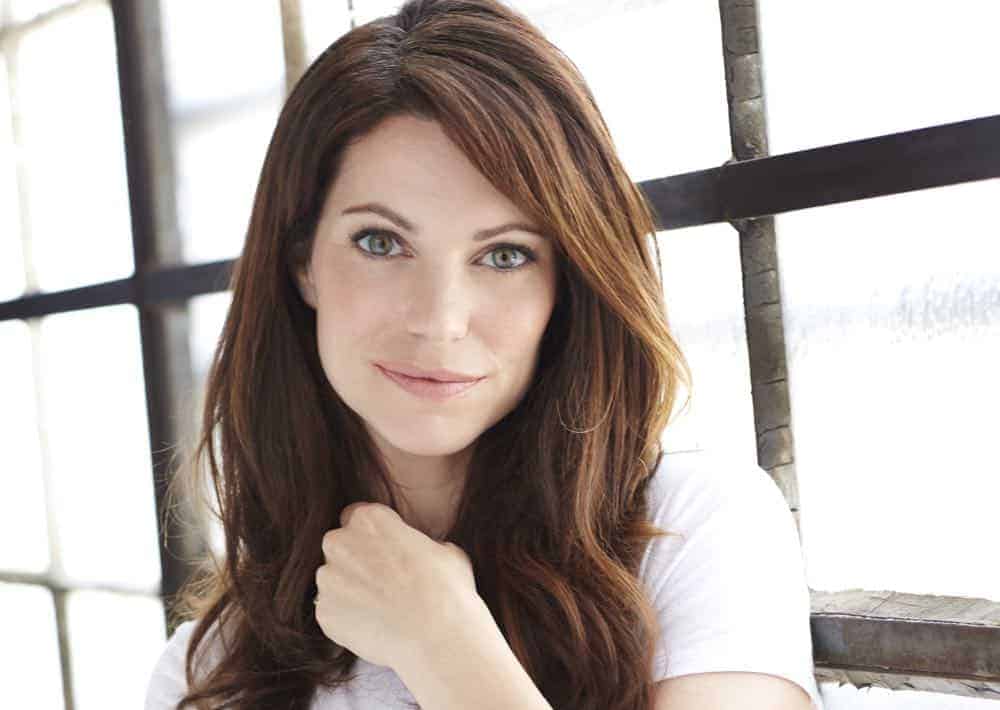 Bringing her energy and enthusiasm to COBRA KAI, the continuation series based on the film “The Karate Kid,” Courtney Henggeler is a delightful addition to the story. In COBRA KAI, Courtney portrays Amanda LaRusso, wife/business partner of Daniel LaRusso and mother of their teenage daughter Samantha, who offers perspective as Daniel and Samantha’s lives become intertwined with the Cobra Kai dojo and its various karate members. In an exclusive interview, Courtney talks about getting to be a part of the joyous COBRA KAI universe and how much she appreciates and relishes this fantastic role at this point in her career.

What was the initial appeal for you about portraying Amanda LaRusso and working on YouTube’s COBRA KAI?
COURTNEY: Are you kidding me?! I got to be Ralph Macchio’s wife in “A KARATE KID” REBOOT?? Sign me up!

How would you describe who Amanda is in the series?
COURTNEY: She’s the voice of reason. When things start to escalate between Daniel (Ralph Macchio) and Johnny (William Zabka), or even with our children, I’m the one who asks everyone to take a beat and think about what they’re really doing and is it worth it?

What do you most admire about her?
COURTNEY: Her sense of humor. I think she balances out Daniel when he starts to get amped up. She has an easy, fun way about her.

What is it like working alongside the talented ensemble on COBRA KAI?
COURTNEY: Pretty incredible. Everyone is so well versed in their character and equally gifted in portraying them. It’s so fun just to get to play.

Were you familiar with the original film “The Karate Kid” in which Ralph and William Zabka had costarred. How did it feel to be invited to be a part of this iconic story?
COURTNEY: Of course! “The Karate Kid” was a childhood staple. It was surreal to get to come along for this ride. But Ralph and Billy are both so kind, so lovely to work with, you almost forget you’re working with your childhood crushes. Almost.

Portraying the wife of Daniel LaRusso, you work alongside Ralph Macchio. What is that experience like?
COURTNEY: Ralph is so invested in who Daniel is, and how this world should be depicted. And rightfully so. He created this character. Keeping the integrity of “The Karate Kid” is something he takes very seriously. So coming into this, I just wanted to do him and the franchise justice. Working with him, I’ve learned to look at details and nuances that might have passed me by before. He also encouraged us to always ask for another take, if we weren’t happy with our performance. I’ve never been comfortable speaking up for myself that way. But Ralph gave me the confidence to own my performance. It’s a great learning experience. Plus I could listen to his stories all day long. He’s got a lot of great tales to tell.

Any favorite scenes that you can share from working on the show?
COURTNEY: I loved my scene with Randee Heller. She gave me everything I needed to fuel my “mother-in-law rage.” It was fun to play with someone in that way. Plus, she’s such a cool lady.

What challenges did you face working on the show and how did you overcome them?
COURTNEY: At time we moved down to Atlanta to film, my son was 8 months old. I was still breastfeeding and we didn’t have any sort of child care in place. Trying to figure out the mom/work balance was a whole new game for me. There were times I would be racing to my trailer to pump and FaceTime my son for 3 minutes because I hadn’t seen him in a day or two. This show was an amazing opportunity and I wanted to give it my all. But I also struggled with not being around for my son the way I had been the previous 8 months. I give 100% of the credit to my husband for helping me make that transition.

Has COBRA KAI left an impression on you in your life? If so, in what way?
COURTNEY: Absolutely. It has raised the bar for every job I have from here on out. The group of people that was assembled to create this show was so special that I don’t know if I will ever find anything like it again.

Then as an actor, what has been the one thing you haven taken away from the experience of working on COBRA KAI?
COURTNEY: I’m learning to have more confidence in speaking up for what I need. My husband (who’s also in the business) has always encouraged me to advocate for myself on set. I’m terrified of hurting anyone’s feelings or being labeled as “high maintenance”. But I realized that I know what I need and shouldn’t be afraid of voicing that. As trivial as it may sound, I wasn’t 100% into the hair style they gave me the first half of the season. I knew I wanted Amanda to look a little softer, but I loved our hair team and didn’t want to hurt anyone’s feelings. Then it dawned on me I was spending more time fretting over my hair than the actual scene. That put things in to perspective. The next day, I brought in a picture of what my vision was for Amanda. It was that simple. But a huge step for me.

What is your proudest achievement working on COBRA KAI?
COURTNEY: Speaking up about my hair! Ha ha.

You also appear in THE Big Bang THEORY as Missy Cooper this season. What did you enjoy about working on that show?
COURTNEY: That entire show is run by the most talented people you’ve ever met. The entire cast is just incredible. But they are so humble and genuinely kind. And they’ve been doing that show for a looooonnnggg time. They show up and work like it’s the first season. I love being around that kind of energy. Just pure enthusiasm for what they are creating. Also, they have a killer craft services.

We have also seen you on JANE THE VIRGIN this season in the role of Satchet. What did you take away from that acting experience on JANE THE VIRGIN.
COURTNEY: That was interesting because an old friend of mine, Justin Baldoni was actually directing that episode. He’s also one of the stars of the show. I was just standing there, watching in awe as he executed each shot. I think for one of the first times in my career, I was more intrigued by the art of directing than actually acting.

What has surprised you most about your career so far?
COURTNEY: That I tried to quit and it wouldn’t let me.

At this stage of your career, what do you think you have learned from the roles and projects you have worked on?
COURTNEY: I am grateful for every job I’ve ever had. They have shaped who I am and what I bring to each set. That being said, I am at a point now where I want to work on projects that stimulate and excited me to play. I’ve never had the luxury of choosing my projects or even roles. I’m your average working actor. And when you’re a working actor, a lot of the time, you’re not working. I need to pay bills, I need to make enough to cover my health insurance. I’ve never turned down a job due to my “creative differences.” I just wanted to work! But now I’m starting to see, that what I want is a career. Not a string of jobs that give a vague resemblance to a career. If I read something and it’s not in line with what I feel I need, I’m learning to become a little more picky. I guess what I realized is, you have to know what you’re worth. I have to be okay with turning something down and trust that what I want will come. I mean, as long as my health insurance is covered!

Then what are the perks of where you are in your career right now?
COURTNEY: I guess, it affords me the opportunity to be a little more choosy. Not by much! But enough.

Has there been any great advice you have gotten about working as an actor?
COURTNEY: Learn everybody’s name. I’ve been on sets, where I’m working on my third day and the director still doesn’t know my name. Or show any interest in learning it. It alienates people. It’s a small act, but knowing someone’s name, and referring to them using it; it really changes the energy of a set. And in life!

What advice would you offer to other upcoming and aspiring actors?
COURTNEY: Go down swinging.

At a time when women’s voices are rising to be heard and respected around the country and world, what do you recommend your fans do to lend support in that endeavor?
COURTNEY: Oye, don’t get me started…. It’s just about respect. The absurdity of thinking anyone is separate or exclude or better than or less than, is incredibly ignorant to me. We are all connected. Hippie dippy as that may sound, it’s a universal truth. Respect the voices, respect the stories, respect the one’s who stand up. Respect the ones who fight quietly. Respect each other, period.

Do you have any other upcoming projects that you can share that fans should keep an eye out for?
COURTNEY: COBRA KAI Season 2!