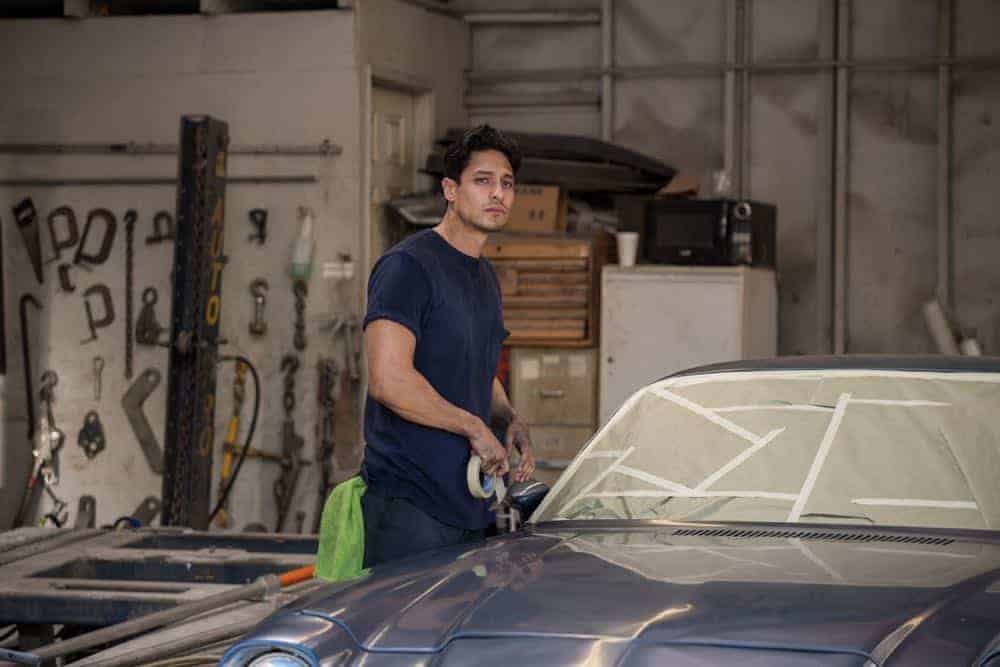 Bringing his passion to the new drama series VIDA on Starz, Carlos Miranda invites viewers to follow his character Johnny as he pursues love and life in the midst of a tale of discovery and revelation. In an exclusive interview, Carlos shares what drew him to the role of Johnny and how his own pursuit of life as a working actor surprises him every day. But as can be seen, Carlos truly believes that a life worth living is one that you pursue with all your heart — on screen and off.

What was the initial appeal for you about portraying Johnny and working on VIDA?
CARLOS: First thing, I appreciated was that he was just a regular guy, not a stereotype. I could relate to him, and I understood this guy. The entire show. Every character. They each touch on a piece of life that is universal in any language.

How would you describe who Johnny is in the series?
CARLOS: I would describe Johnny as your around-the-way neighborhood boy. He grew up in the Eastside of LA. His friends are from there. His fiancé is from there. His baby will be from there. He’s just a guy who is taking life one day at a time.

What do you most admire about him?
CARLOS: Despite the circumstances, he follows his heart. Sometimes, that can get you in trouble, and in Johnny’s case, it definitely does, but the heart wants what it wants. At least he had the balls to say “fuck it,” regardless of the consequence.

How would you describe VIDA for viewers interested in the show?
CARLOS: I’d say it’s a beautiful slice of life. It’s an honest story that’ll touch on many familiar issues, but it will be from a point of view we haven’t had a chance to see before. I can’t wait for people to watch.

What is it like working alongside the talented ensemble on VIDA?
CARLOS: Everyone is amazing. I am a fan of everyone.

Who do you get to work with most in the series and what is that experience like?
CARLOS: I mainly worked with Melissa Barrera. She plays ‘Lyn’, one of the two sisters in the show. She’s absolutely incredible. She’s a pro; she always knows her shit, and she could cry in the snap of a finger. It’s a hell of a tool. She’s dope as fuck.

Do you have any favorite scenes that you can share from working on the series so far?
CARLOS: I do. But I shouldn’t say.

How does Johnny view Emma and Lyn?
CARLOS: I think Johnny considers them family. He’s known them most, if not all, of his life, particularly Lyn. Whether or not they’re in communication with each other in their lives, Johnny would always be there for her, if she needed him.

As an actor, what has been the one thing you have taken away from the experience of working onVIDA?
CARLOS: I really loved the experience of working with all of these talented female filmmakers, from the writers, to the cinematographer, to the directors. Our showrunner, Tanya Saracho, is amazing as well. It was an absolute joy to be surrounded by these women, women of color, queer, straight, lesbian, non-binary. It wasn’t your traditional production crew and seeing them all get the job done, and get it done well, I loved it.

What is your proudest achievement working on VIDA?
CARLOS: Just seeing it all come to fruition. Wrapping it was bittersweet because I had such a mind-blowing wonderful time coming to work on it that I was a bummed out it was done. However, to think of the whole experience, from the time I sent in my self-tape to wrapping up my last scene, I’m so proud to have been a part of it.

You also worked on “End Trip.” What did you enjoy about working on that project?
CARLOS: Hell yeah! That’s a project I developed relatively quick from the desire of wanting to create. I wasn’t working or booking any work. I was in a slump, so I decided to make a short film. I wrote this story about a bad ridesharing trip. I produced it with my own money; I directed it, and I had a part in it. It was the first film I ever made. I enjoyed the whole experience of making it. I learned a lot.

What did you take away from that experience on “End Trip” as a creator, writer, director and actor?
CARLOS: I took away a strong admiration for filmmakers. There’s so much work that’s put into making a movie, whether it’s going to be two hours or five mins. It’s not easy, but what a rewarding feeling.

You also worked on “Senior Moment” with William Shatner and Christopher Lloyd. What did you enjoy about working on that film?
CARLOS: Besides meeting those two legends, I got to drive some pretty cool cars.

What has surprised you most about your career so far?
CARLOS: Nothing and everything. I knew that this wasn’t going to be an easy career to embark on, so the grind is no surprise to me. I figured that I’d be at it for a long time before getting any breaks. But every time I book a job, I’m surprised honestly. A lot of times, it’s the one you don’t really expect to get, and it’s always surprising to be told you got the part. It always feels so surreal to me.

At this stage of your career, what do you think you have learned from the roles and projects you have worked on?
CARLOS: Every project you work on will be different and unique. I think also that the right project will sort of find you.

Then what are the perks of where you are in your career right now?
CARLOS: That I’m enjoying the fruits of my labor, but no one knows or cares who I am right now.

Has there been any great advice you have gotten about working as an actor?
CARLOS: Sam Elliott once told me once (he probably doesn’t remember this) as he rested his forehead against mine, to “don’t ever stop.” So, I’m not.

What advice would you offer to other upcoming and aspiring actors?
CARLOS: Just don’t give up. If you love it, then do what you love. Don’t ever quit.

At a time when women’s voices are rising to be heard and respected around the country and world, what do you recommend your fans do to lend support in that endeavor?
CARLOS: Be aware of what’s going on, have conversations, and listen to each other. To the fellas: be conscious of how we treat our women. Treat people how you’d want to be treated.

Do you have any other upcoming projects that you can share that fans should keep an eye out for?
CARLOS: I’ll be guest starring on LAW & ORDER SVU on May 23 for the two-episode season finale. I also just wrote another short film. I’m revising it right now and hope to get production going on some time this year hopefully.

To see how Carlos’ character Johnny fits into the world of the Hernandez sisters this season in VIDA, be sure to tune in for all new episodes on Sunday nights at 8:30 p.m. on Starz. Also, to see exclusive clips and learn more about the show, you can follow the show on Twitter @VIDA_Starz.